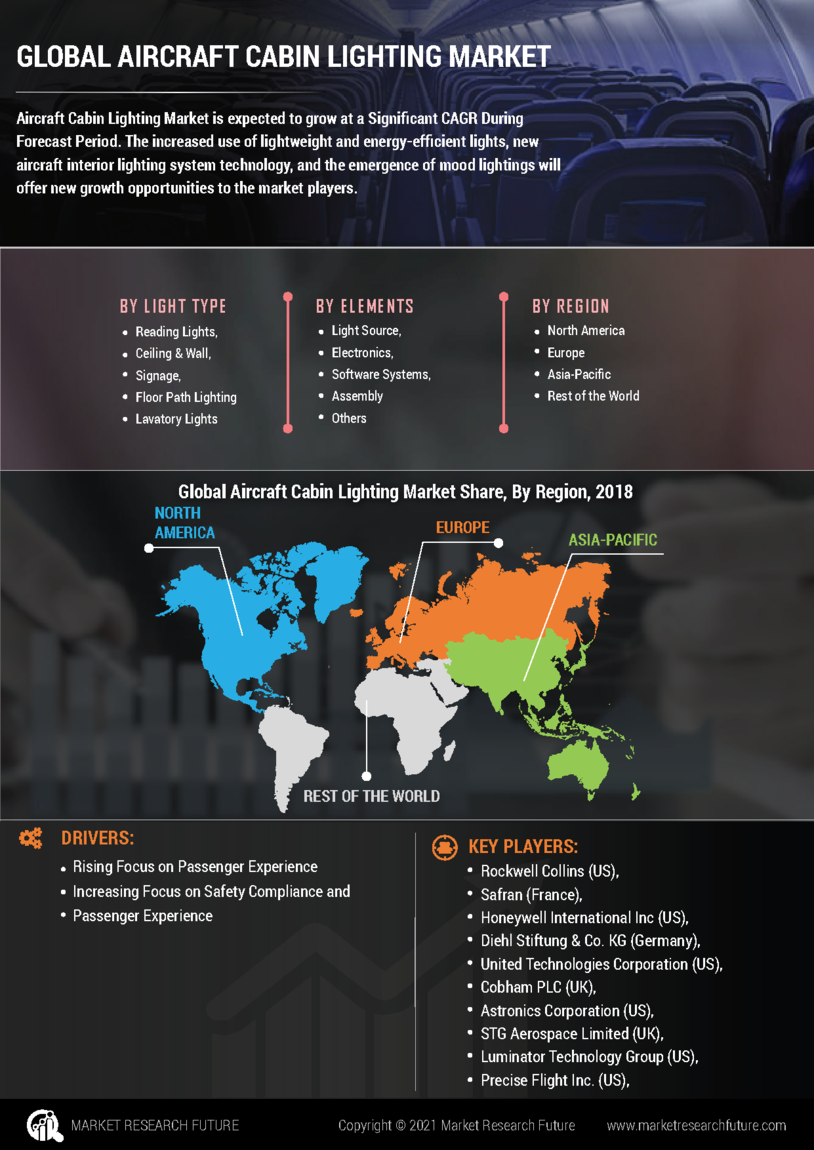 This growth can be attributed to propelling market factors, like an increased degree of demand for interior light systems, as most of the airlines are known to be upgrading their cabin interiors for increased efficiency and also, providing better service to passengers. However, there is a considerable lack of profitable airlines in emerging economies is expected to restrain the growth of this market.COVID AnalysisThe emergence followed by the outbreak of COVID-19 as a pandemic and international spread has impacted the aviation industry negatively. The market is facing issues and losses owing to the air travel restrictions that have been imposed by the global governments on both domestic as well as international flights across locations and countries. This is resulting in the permanent grounding of aircraft fleets and further, giving rise to a sudden dip followed by major losses in aircraft orders and deliveries since the beginning of the pandemic year in 2020. This is likely to negatively impact the global aircraft cabin lighting market in both the long and short term of the ongoing forecast period that will be ending in 2028. The global market operations are expecting a slow yet steady recovery for the ongoing forecast period that will be ending in 2028. The aviation and aircraft industry is likely to witness similar trends for a minimum of 2-3 years to recover from the financial losses and effects of the pandemic. This is further, leading to lower air travel and passenger demand, and traffic compared to previous global market projections for the CAGR and global market rate.

The temporary halts and lockdown have been imposed by the global governments in the production sector and manufacturing units that have impacted the OEM market for aircraft cabin lighting adversely. Further, there has been a delay in the aircraft deliveries in the first and second quarters of 2020. The permanent and temporary lockdowns in various markets and countries have further resulted in the declined quantum of the revenue that is likely to be earned by the producers and manufacturers.

After the lockdown was removed along with other functional restrictions, the market groups including businessmen, politicians, and high net-worth individuals are likely to prefer air as their mode of travel which will help the market undergo excellent growth and chances to cover the losses that have been incurred during the spread of the pandemic before the beginning of the forecast period of 2021-2028.

The aircraft cabin lighting manufacturers are understanding the birth and development of various market challenges that will restrain the market from growing during the forecast period that will be ending in 2028. The lack of investment and the trends that have changed and hence, the market needs to focus on what’s the need of the hour.

Aircraft and component manufacturers are on their way to undertaking efforts for the development of new technologies that benefit both, the airlines and passengers and hence, make air travel more comfortable. For example, in February 2017, one of the prominent market players - Lufthansa had introduced a new aircraft interior lighting technology that had developed for the Airbus 350-900. The emergence of this new technology helps in providing the global capability of 24 lighting variants for the convenience of the global passengers, and further, their functions are based on the biorhythms of passengers that are on board.

The aircraft cabin lighting market has been segmented based on the end-user industry and includes OEM and aftermarket.

The Aircraft Cabin Lighting Market has the light type segment and includes Reading Lights, Ceiling and Wall Lights, Signage Lights, and others like Floor Path Strips, and Lavatory Lights.

The aircraft cabin interiors market has been segmented based on the regions as well. The regional segmentation of the global market includes countries like the North American region, the European countries, the Asia Pacific region, Latin America, the Middle East, and Africa. The North American market is projected to lead the aircraft cabin lighting market during the forecast period that will be ending in 2028. The Asian Pacific region, as a part of the aircraft cabin lighting market, is expected to grow at the highest market CAGR during the forecast period that had begun in 2021. The global market will grow owing to the emergence of emerging aircraft manufacturers, which are inclusive of COMAC (China) and Mitsubishi Aircraft (Japan), among many others. The Asian Pacific region and the market have witnessed a strong degree of growth in the past few years, mainly due to the rising air passenger traffic and hence, will help the market grow.

The cabin interior market revenue is projected to undergo a reliable market increase in the global market premises especially during the ongoing forecast period that has already begun in 2019 owing to the splendid recent developments that the global prominent companies and players have opted for in the form of mergers and acquisitions amongst others. The commercial cabin interior market size is rising because of the following market players:

The aircraft cabin lighting market share has been discussed by the market dealers and experts based on the propelling trends for the forecast period of 2021-2028. The market report discusses the factors that will help the market cover the losses of the pandemic followed by the drivers and challenges that might restrain the market from growing and witnessing trends that will lead the market towards growth and mass competition. The report discusses the factors that give rise to the competition amongst prominent market players followed by the basis on which the global market has been segmented to meet the rising needs of the global target audience that is spread in an array of global locations.

What are the firms in the aircraft cabin lighting market estimated to empower development in the coming period?

Which region is predicted to be at the vanguard for aircraft cabin lighting market’s expansion in the forecast period?

The North American region is geared up to be the leader in the forecast period.

Which segment in the aircraft cabin lighting market is estimated to show prolific growth in the forecast period?

The improvement in the aircraft type segment is estimated to spur the market.