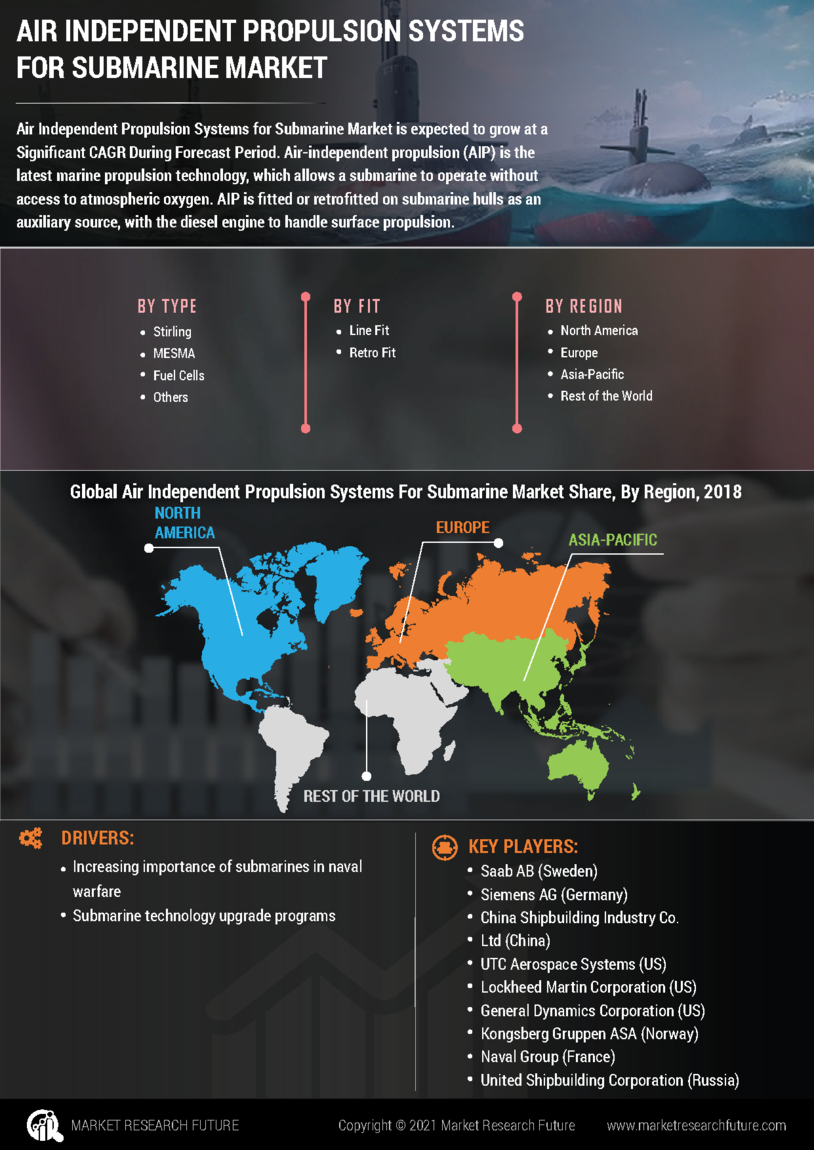 Air-independent propulsion (AIP) is the latest marine propulsion technology, which allows a submarine to operate without access to atmospheric oxygen. AIP is fitted or retrofitted on submarine hulls as an auxiliary source, with the diesel engine to handle surface propulsion. Earlier, diesel locomotive submarines had an underwater endurance for a few days and needed to travel back to surface for charging their batteries. As battery technology improved, the endurance of those submarines improved; however, it did not last for enough time. These batteries run out of charge in 4 to 5 days and need to be recharged. This is done by snorkeling, which exposes submarines to enemy radars, making them an easy target. Thus, the requirements of a system that may enable diesel-electric submarines to recharge their batteries without running their engines are increasing. AIP systems can allow them to continue sailing underwater and remain unseen. They are majorly used for enhancing the performance of small defensive submarines.

For instance, Siemens Industry Solutions Division signed an agreement with the Italian navy to provide two submarines with fuel cell technology for air-independent propulsion. The PEM fuel cell system takes charge of the power supply; hence, it will enable air-independent propulsion of submerged boats. Similarly, DRDO builds AIP propulsion systems that could be fitted in the Scorpene submarines under technology transfer from a French defense company, DCNS. The French company, DCNS, is also working on hydrogen fuel cell propelled AIP system for submarines.

Moreover, owing to the increasing importance of submarines in naval warfare, submarine technology upgrade programs are expected to drive the marketplace for combat systems, among others will be thought of because the indirect factors are driving the AIP systems market. AIP technology will be installed on existing older generation submarines by inserting a replacement hull section throughout a retrofit. The rise in popularity of new submarine technology is expected to drive the market during the forecast period. The factors responsible for the growth of air-independent propulsion systems for the submarine market are the need for extended submerged periods, cost efficiency, increased investment in R&D, and technological advancements in submarine systems.

Based on type, the global market has been segmented into stirling, MESMA, fuel cells, and others. The stirling segment accounted for the largest market share in 2018 and is expected to witness the highest CAGR during the forecast period, 2019 to 2025. In a stirling engine, the heat is produced in a combustion chamber that is separated from the actual engine. The whole system works in a closed system, thus forces the pistons in the engine to move and produce mechanical energy. They ensure low-power consuming operations and are much less noisy than the conventional diesel generators of submarines.

Based on the region, the market has been categorized as North America, Europe, Asia-Pacific, the Middle East & Africa, and Latin America. North America is estimated to acquire the most significant market share in 2018. However, Asia-Pacific is expected to grow with the highest CAGR during the forecast period, 2019 to 2025. Technological advancements and increasing military expenditure by developing economies such as China and India are driving the Air Independent Propulsion Systems (AIP) Marketin the Asia-Pacific.

In this process, both the demand- and supply-side parties are interviewed to extract facts and insights into the market forecast, production, trends, and projected market growth. Industry stakeholders such as CEOs, VPs, directors, and marketing executives across the value chain are approached to obtain key information.

What is the estimated market value of the global air-independent propulsion systems for submarine?

global air-independent propulsion systems for submarine is estimated to acquire the market value of USD 180.01 by 2030.

At what CAGR is the global air-independent propulsion systems for submarine market likely to expand?

global air-independent propulsion systems for submarine is likely to expand at a CAGR of 5.01% by 2030.

Who are the renowned players of the global air-independent propulsion systems for submarine market?

Which region is expected to grow at the highest CAGR?

The APAC region is anticipated to grow at the highest CAGR during the forecast period.