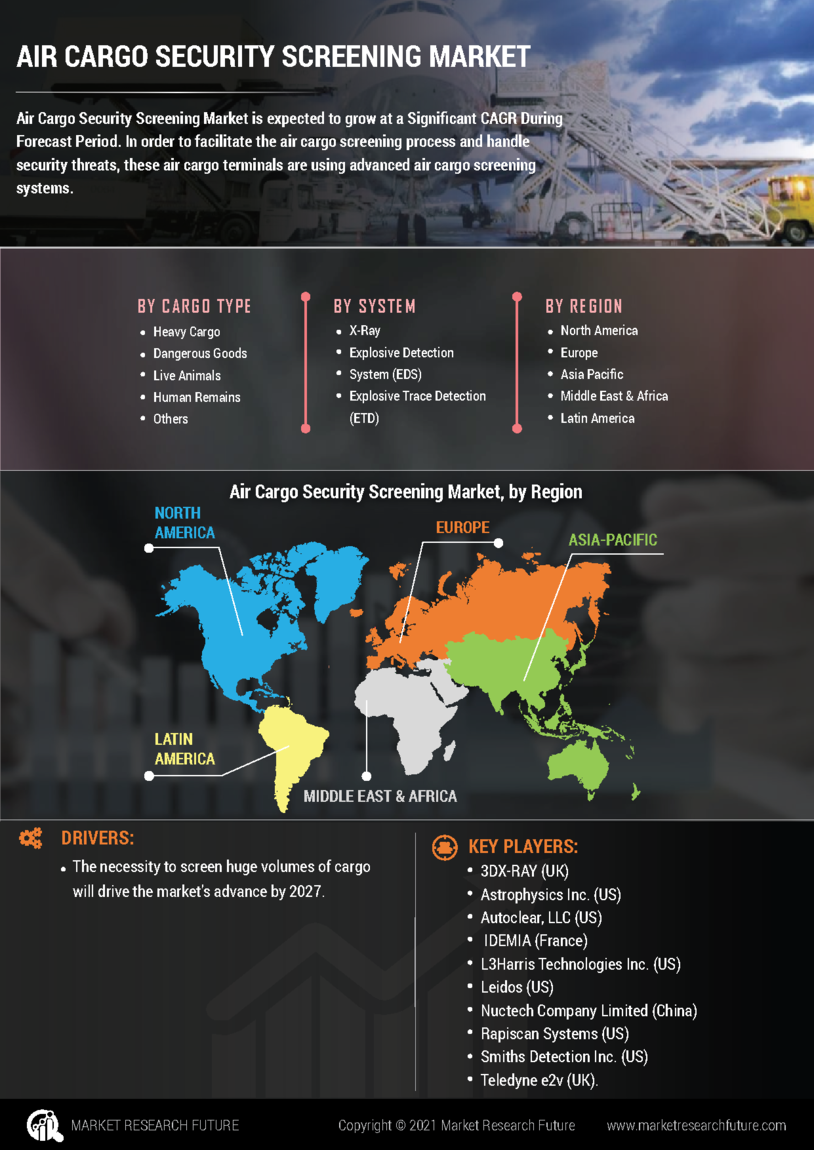 Earlier, security checks for cargo shipments are carried out through physical inspection or by canine method (threat detection dogs). But with the increase in global air cargo traffic, there is an increasing need for effective air cargo security and screening systems. Thus, the demand for new sophisticated air cargo screening systems—that are efficient and effective in screening large volumes of cargo—has increased. The screening systems that currently being used by airport authorities are based on X-ray, explosive trace detection (ETD), and explosive detection system (EDS) technologies.

Along with the increased air cargo volume, there increased rules and regulations for air cargo security. For example, there are advancements in standards and recommended practices by the International civil aviation organization (ICAO), international air transport association (IATA), and transportation security administration (TSA), which requires member nations to establish a system to secure the air cargo supply chain; this leads to  the need for sophisticated air cargo security and screening systems.

Moreover, considering the volume of air cargo traffic, diversity of origins, and the varying nature of commodities, air cargo remains a primary target for terrorist attacks. In order to prevent such threats, several countries and global organizations have strengthened the need for air cargo security screening; furthermore, new rules and regulations have also been imposed. Higher leverage has been placed on new, sophisticated, and efficient air cargo security and screening systems.

In 2013, terrorist attacks were increased by 43% worldwide. The air cargo industry is also a considerable target for terror attacks. For instance, in 2010, two packages shipped from Yemen to Chicago consisted of printer cartridges containing explosive materials. Hence, the implementation and use of air cargo security and screening systems have increased globally.

After the 9/11 attack in the US, security measures have been implemented globally to address the increasing number of security threats. This has resulted in enhancements in the security infrastructure and advanced technological systems. With an increase in air cargo traffic and security risks, stakeholders are under the increasing pressure of implementing advanced systems that enhance screening and surveillance.

The air cargo security screening market has been segmented on cargo type, system, and region. Based on cargo type, the market has been segmented into a heavy cargo, dangerous goods, live animals, human remains, and others. The dangerous goods segment is expected to exhibit the highest CAGR during the forecast period. The high use of cargo screening for the detection of narcotics and explosives is driving the growth of this segment.

Based on the system, the market has been segmented into X-Ray, explosive detection system (EDS), and explosive trace detection (ETD). The EDS segment is expected to record the highest CAGR during the forecast period. EDS is a method of screening cargo for explosive goods and other illegal or dangerous items during the scanning process. The system uses 3D volumetric computed tomography (CT) imaging and reconstruction and can be used as a fully integrated inline system, as part of a partially integrated system, or as a stand-alone unit.

Based on the region, the market has been segmented into North America, Europe, Asia-Pacific, Middle East & Africa, and Latin America. Asia-Pacific leads the world in terms of the number of passengers as well as air cargo volume, which has resulted in increasing investment in aviation security. The growth in the economy and the rising demand for global trade to and from this region have propelled the global air cargo traffic and led to an improvement in the security infrastructure associated with it. Many of the world's largest and most efficient cargo operators are located in Asia. Boeing forecasts that the region's air cargo traffic will grow by 5.5% per year for the next 20 years. Along with the growth in air cargo traffic and construction of new airports, Asia-Pacific is also investing in the utilization of state-of-the-art technologies, for example, the cargo-screening technology based on neutron and X-ray radiography.

Air cargo traffic is the highest in North America. This, along with stringent air cargo security laws in the US such as the Aviation and Transportation Security Act, National Intelligence Reform Act, and Homeland Security Appropriations Act, are mainly driving the demand for air cargo security screening systems in the region.

Europe is a developed, and mature market with air cargo traffic revenue tonne-kilometers (RTKs) forecasted to grow by 3.5%, annually, over the next 20 years. Owing to the high trade volumes in the region, air cargo screening systems are widely utilized, which, in turn, is expected to boost the growth of the regional air cargo security screening market.

In the Middle East and Africa, air cargo traffic RTKs are projected to grow at CAGRs of 5.9% and 6.1% respectively over the next 20 years. In the Middle East, there are significant investments in infrastructure development targeting new airports and terminals in the region's main cargo hubs.

What is the trajectory for the air cargo security screening market CAGR growth in the forecast period?

What valuation is projected for the air cargo security screening market by the conclusion of the forecast period?

An outstanding income generation possibility is seen in the market through the forecast period.

What reason will broaden the development of the air cargo security screening market?

The necessity to screen huge volumes of cargo will drive the market's advance by 2027.

Which region is the leader for change in the global air cargo security screening market?

The Asia Pacific region is estimated to command the market due to high passenger traffic in the region.

Air Cargo Security Screening Market To Expand Steadily AT A CAGR Of 6% During The Forecast Period...