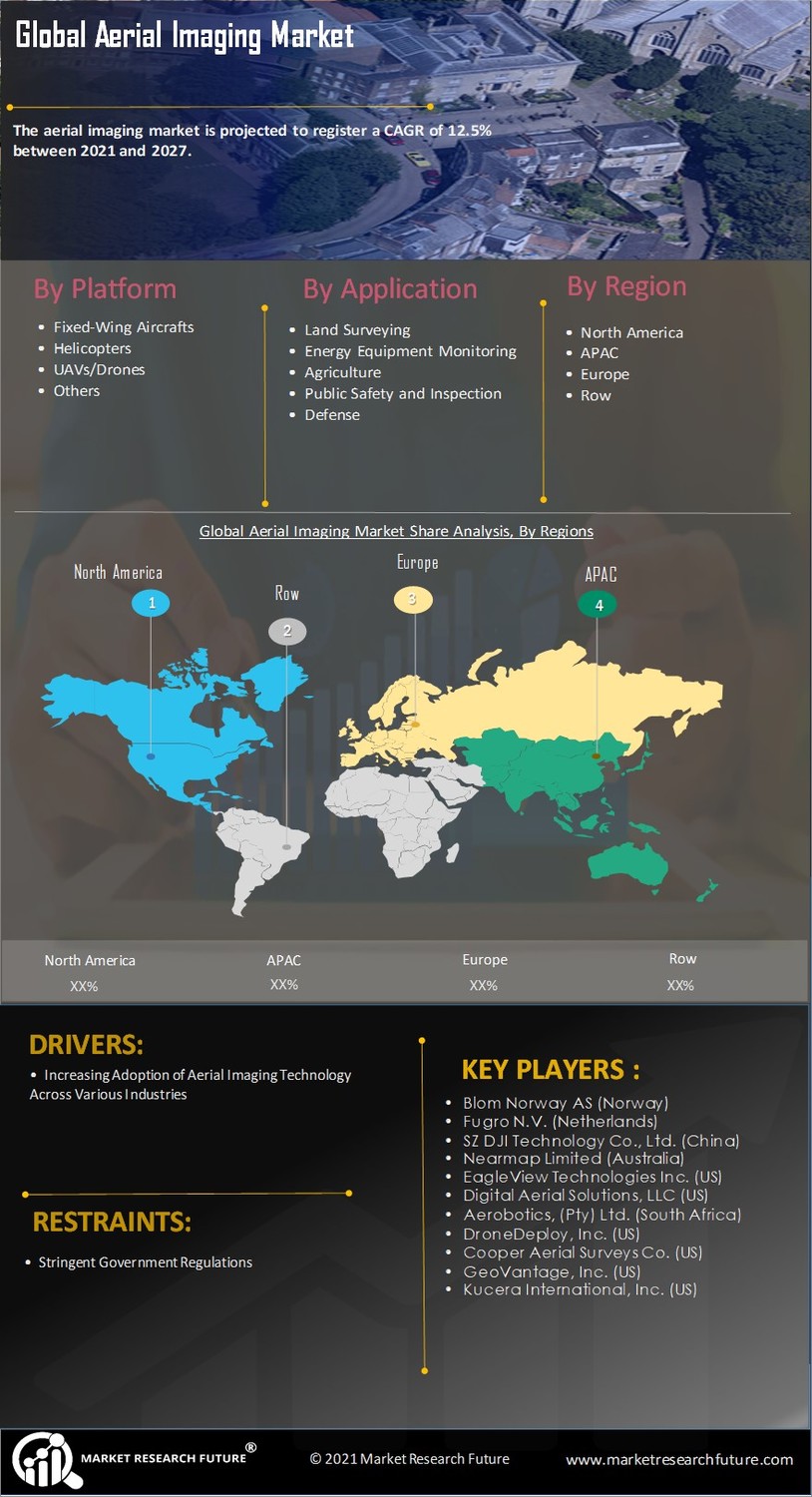 Technological advancements such as the Internet of Things (IoT), LiDAR systems, GIS (geographic information system), and 360-degree vision cameras have bolstered the aerial imaging market. Unmanned aerial vehicles (UAVs) and drones are two instances of aerial imagery that are gaining traction in a variety of end-user sectors.

Aerial mapping of the terrain is critical for planning and implementing diverse tactics in a variety of applications, including forestry, coastal navigation, mining, oil and gas exploration, and disaster management. The use of GPS and inertial technology to generate a detailed and precise three-dimensional set of points or three-dimensional point cloud models has gained popularity in the world's industrial sectors.

Additionally, the aerial imaging market is seeing increased demand for a variety of applications from a variety of end-user sectors. Numerous uses include increased surveillance and monitoring, disaster management, geographic mapping, infrastructure development mapping capabilities, and assisting farmers in monitoring crops and identifying problems. As the aerial imaging market is still in its infancy, increasing demand for a variety of applications is projected to drive global growth.

According to MRFR, the current projections of global aerial imaging market growth till 2027 are expected to be lower than pre-COVID-19 estimatesdue to a slight decline in the production of tools necessary for aerial imaging. However, COVID-19 has led to a surge in demand for aerial imaging tools, owing to their ability to get things done without any contact, and is expected to continue doing so for at least the next few years.

The use of aerial imaging technology by the government for surveying and mapping in its land administration plans and projects is expected to play a key role in the growth of the aerial imaging industry. One such example is the Government of India’s (GoI) Svamitva Scheme, which was launched on 24th April 2020. The scheme aims to offer an integrated solution for property validation in rural India. Survey of India has been working as the technology partner for scheme implementation. The scheme is particularly helpful in creating survey infrastructure and geographic information system (GIS) maps which can be leveraged by various government departments and agencies as needed. In April 2020, the Argentine government used this technology for the land surveying and construction of 12 modular hospitals to attend to its critical cases across the world. Around 10,000 square meters of land was surveyed in three days, and the drone images were used to generate 2-D and 3-D maps of the working sites. These hospitals added 1,200 beds and isolation rooms and intensive care units, thus providing the needed boost to the healthcare system.


Globally, there has been a notable increase in the adoption of aerial imaging tools to perform a wide range of tasks spread across various industries. This increment is particularly fueled by the land surveying industry, which is using it to understand landscapes and terrains with the generated 3-D models. Additionally, the energy industry has been using it to monitor and inspect their large equipment, thus, ensuring their longevity and safety. Many countries across the world use this technology to keep fatalities to a minimum during natural disasters and even explore areas that are unsafe and difficult to enter. Therefore, the increasing adoption of aerial imaging technology is likely to spur market growth during the forecast timeline.


The aerial imaging solutions are transforming the agriculture sector. Only a small percentage of farmers or farm owners are using these solutions;however, they can leverage information from aerial imaging platforms to generate ortho mosaic maps of their farms and fields. The newer platforms come with multi-spectral cameras allowing users to generate normalized difference vegetation index (NDVI) for a much deeper understanding of important factors such as field performance and crop health. Thus, the growing adoption of aerial imaging solutions in the agriculture sector poses lucrative opportunities for the growth of the global aerial imaging market in the coming years during the review period.


The rapid adoption of aerial imaging solutions has raised some serious concerns regarding national security and privacy violation across most of the nations in the world. Because of the increasing usage of these solutions for civilian applications, governments across the world are making efforts to address these issues and come up with regulations to ensure that the use of this technology is safe and ethical without violating public and national security. These regulations are regarding the type of application (recreational or non-recreational), geographic restrictions, and even manufacturing and sales. Thus, stringent government regulations are likely to restrict the market growth to a certain extent during the forecast period.


The global aerial imaging market growth is expected to be at a rate of 12.5% over the analysis period (between 2021 and 2027) on account of growing advancements in aerial imaging technology.


The global aerial imaging market based on platform type has been segmented into fixed-wing aircraft, helicopters, UAVs/drones, and others. The UAVs/drones segment is expected to dominate the market over the forecast duration. This is due to an increase in their adoption for applications such as precision agriculture, surveying & mapping, insurance claim verification, aerial remote sensing, to name a few. Increasing spending by the defense agencies around the world on the procurement of military-grade UAVs/drones is also expected to boost the demand for UAVs/drones during the forecast period.

Based on application, the aerial imaging market has been classified into land surveying, energy equipment monitoring, agriculture, public safety and inspection, and defense. In 2020, the defense segment held the largest market share. The increasing use of drones in defense and homeland security to identify challenges related to terrorism and precisely locate vulnerable areas are expected to contribute to the demand for aerial imaging solutions in the segment. Drones help the military augment their force, thereby enhancing their capabilities to subdue terror and counter the emerging challenges related to terrorism and national security. Thus, the defense segment is likely to be responsible for a major chunk of aerial imaging market revenues in the coming years during the review timeline.

Europe held a significant share in the aerial imaging market in 2020. The increasing demand for geographic data using UAVs, aerial surveys, and aerial imagery drives the growth of the aerial imaging market in European countries such as the Netherlands andthe UK. Furthermore, the countries in the region have increased their spending significantly on the acquisition of geographic data and aerial surveys, primarily for oil and gas exploration, coastal navigation, and disaster management, which, in turn, is anticipated to fuel the regional market growth.


The global aerial imaging market is anticipated to grow significantly in the coming years due to the increasing adoption of aerial imaging technology across various industries and growing location-based services (LBS) and real-time location systems (RTLS). The global aerial imagingmarket is characterized by the presence of several global and regional vendors. The market is highly competitive, with all the players trying to gain maximum market share. Frequent changes in government policies, intense rivalry, and government regulations are the key factors that impact the global market growth. The vendors compete based on cost, product quality, and reliability.

The scope of the report highlights drivers, opportunities, restraints, and challenges surrounding the global market. With easy-to-comprehend segmentation that includes operation, platform,and region, MRFR projections are on the basis of historical as well as expected trends. Major firms active in the global market have been profiled and paired with the top strategies employed by them to remain competitive in the industry.

How Aerial Imaging Market is Worth Globally ?

Who Are The Top Key Players in Aerial Imaging Market ?

In Which Region Aerial Imaging Market Having Highest Share ?

Which Are The Key Driver of Aerial Imaging Market ?