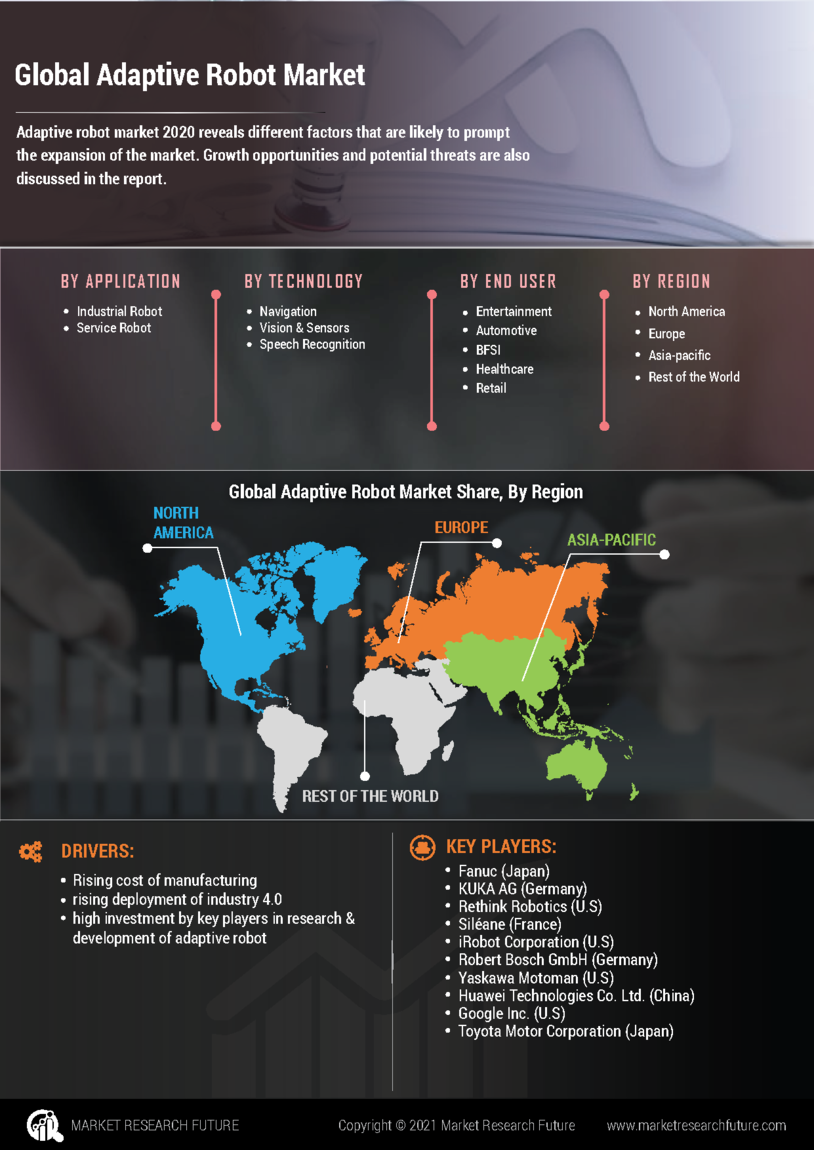 The Adaptive Robot Market 2020 reveals different factors that are likely to prompt the expansion of the market.

The Adaptive Robot Market is acquired to reach a substantial CAGR value and significant value during the forecast period by 2027.

An adaptive robot is a connection based on the digital and physical world. Adaptive robot technologies are using modern and advanced technology to expand the capabilities of the market. The increased rate of applications of industrial robots in different industrial verticals is driving the Adaptive Robot Market growth.

The automotive and medical sectors adopt adaptive robots for various operational work as these robots have multiple features such as interaction with surroundings for operation. It can also change the direction according to the direction or working condition. The growth of automation in the manufacturing sector for reliable and faster service increases the demand for the market.

The increased rate of artificial intelligence development in the verticals sets vast opportunities. Technological advancements for sensing, speech recognition, and deep learning associated with mobility and navigation are beneficial for industrial purposes. The operational process includes optimising logistics, facility management, and customer engagement. These processes are enhancing the Adaptive Robot Market size. The development and improvements of the market's key players for research activities bring opportunities for the market.

The upsurge of COVID brought a downfall in the market during the market forecast period. COVID has resulted in creating a lockdown scenario by the government which has safeguarded the people so present throughout the world. Moreover, the traveling units have experienced shutdown where transmission of the virus is being avoided. After the recovery of COVID, the technology of robots will gain prosperity in the upcoming years. Supply chain analysis of the industrial verticals was disrupted. Manufacturing and healthcare units adopted robots to work in a certain place which minimized the impact of COVID on it. Production units faced difficulties in manufacturing during this situation.


With the rise in Development of the demand for artificial intelligence where the robot is now transforming single-purpose equipment to multi-purpose equipment. The rise in technological development like vision along with sensing, recognition of speech, learning deeply along with mobility and navigation, lead to the development of industrial purposes which includes processing the optimizing logistics, management of facility, service, and engagement by customers, assembling along with the packaging of robot parts, management of inventory purposes, and many more helps in driving up the Adaptive Robot Market size.


Increase in costs of manufacturing processes, with the rise in deployment of the adaptive robot industry along with high sums by certain robot key players along with a change in research and development of the Adaptive Robot Market, are the main opportunities that raise the market growth. Due to the lack of regulations, and the decrease in the adoption of the discrete manufacturing units where it rises, the complexity of operations are some of the factors that raise the opportunities. The need for automation and safety of the organization raises the availability and affordability of production of energy-efficient adaptive robots which raises the Adaptive Robot Market size. An increase in labor along with the energy costs upsurges the rise of robotic technology across different industrial verticals.


The risk associated with human safety where it interacts with the robots along with the rise in unemployment factors where it adopts different robotic technologies which act as a challenging factor for the Adaptive Robot Market.


Increase in the initial cost of the manufacturing of the robots along with the lack of awareness spread along the Adaptive Robots deteriorates the market size.


Adopting adaptive robots influences the end-user sectors in some other ways. It includes automating the manufacturing process from the initial stage to the finished one, automation of quality control market system, it also involves the testing process, using the improvised efficiency of the adaptive robot technology, it helps the researchers along with the scientists for having a better understanding about the biological neural connection, its law and enforcement along with the security, assistance towards the natural disaster and many more. Globally, the adaptive adaptive robot industry is being classified into the application, technological encroachment, location dealing with computing services, applications, segments of end-users, and based on region. Based on technology, the adoption of the Adaptive Robot Market is being divided into vision and sensors, perception towards learning, recognition of speech, along mobility and navigation. Based on computing location, the industry is being classified on board and the cloud. Based on application, the Adaptive Robot Market is being segmented into industrial and consumer robots, logistics along service robots. As per the end-user segment, the market is being classified into automotive, aerospace, electronic sector, food and beverage units, healthcare units, retail units, entertainment segment, travel and transportation units, BFSI units, and education units. Based on region, the industry is being divided into the North American region, some of the European region, Asia Pacific, and some regions in the rest of the world. The hardware segment occupies a phenomenal Adaptive Robot Market share during the market forecast period. It has been found that the adaptive robot industry enhances the efficiency of robotic applications. Here the service robot segment rises at a significant rate which owes to the adoption of certain market services which raises the competitive analysis of the market. Based on the component, the market is being classified into hardware, software, and certain services. As per the robot type, the adaptive robot industry is being classified into traditional, industrial, professional services, and many others. Here the application segments include manufacturing units, healthcare sectors, aerospace, defense sectors, media, entertainment segment, and logistics units.


The advancement of technology led to the development and production of certain robots which dealt with the replication of human activities. Here the technology helped in the enhancement of certain performance of the organization dealing with robotic activities. It produces good and better outcomes. Here the technology helped in spreading its applications through a wide range of areas majorly dealing with the verticals of industrial Adaptive Robot Market growth. It produced certain growth in healthcare, domestic, agricultural, and manufacturing sectors.

Flexiv, a general-purpose robotics company leader, displayed its cutting-edge robotic automation solutions at the ATX West expo in Anaheim, CA, from the 12th to the 14th of April 2022. ATX West is the largest automation technology event for both the suppliers and buyers for the discovery of innovation, engineering new technology, and building a better lifestyle.

What reasons are assessed to stress the progression of the adaptive robot market?

What are the segments in the examination of the adaptive robot market?

End-user, computing location, technology, application, and region are segments that permit a better study of the market on a global scale.

By the regions, which regional market is prone to motivating the adaptive robot market in the forecast period?

The surge in the deployment of robots in the regions is expected to place the North American region at the pole position in the market.

Who are the competitors in the adaptive robot market?

What is the income creation capability of the adaptive robot market?

The income creation capability of the market is expected to rise with developments within the market.

Adaptive Robot Market is Expected to Showcase Rampant Growth Over 2023