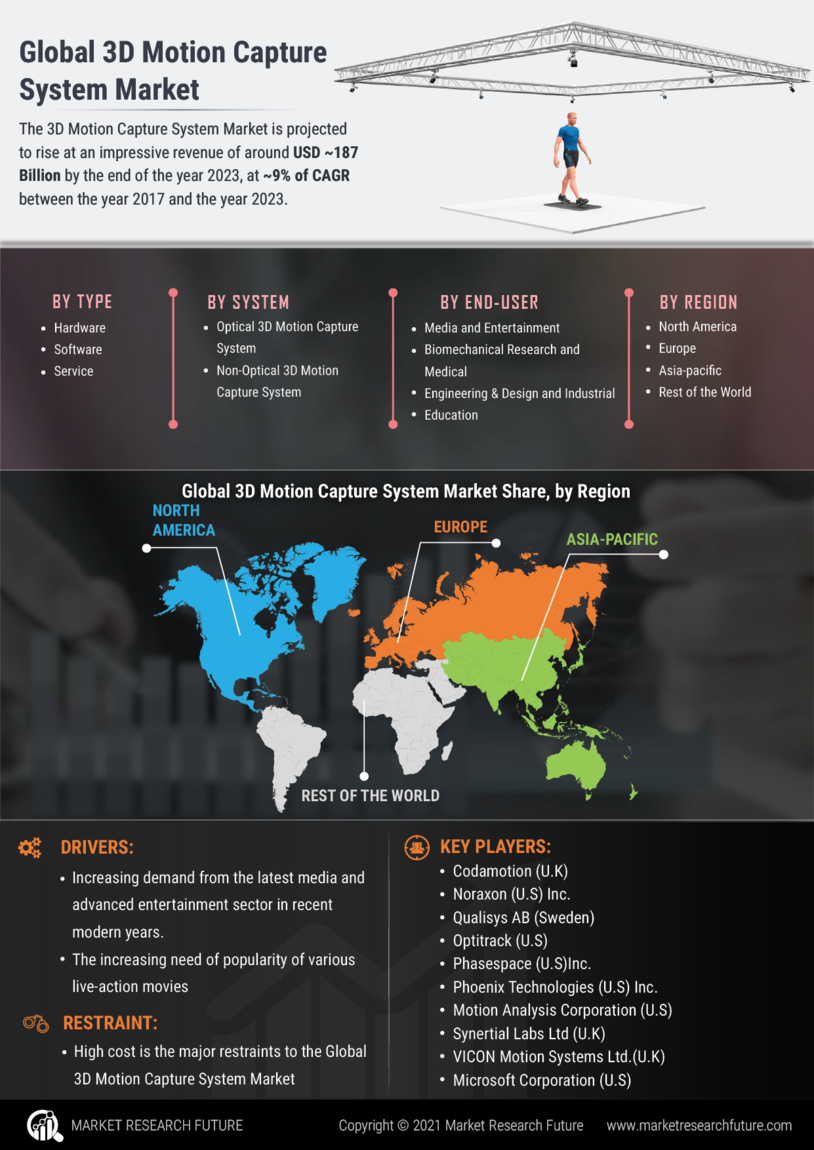 Globally, the size of 3D Motion Capture System Market is projected to rise at an impressive revenue of around USD 331.73 Billion, at a 14.10% of CAGR by the end of the year 2030 driven by the Increasing demand from the latest media and advanced entertainment sector in recent modern years.Motion capture is explained as recording the movement of people or objects and other industries. In various applications, this system is used such as education, media and entertainment, biomechanical research and medical, engineering & design, and industrial applications. Motion capture is explained as the process of recording the movements of various objects. This technology originated from the 3D Motion Capture Market and is now used extensively for sports therapists, VFX studios, neuroscientists, and for the control of computer vision and robotics. Various industries like entertainment, military, healthcare, sports, and validating vision for robotics and computers use the 3D Motion Capture System Market. In the filmmaking industry, 3d motion capture refers to recording the actions of human artists and operating information for the animation of digital characters and models. Few restraints and challenges will also hinder the market.

The COVID-19 pandemic has immensely impacted the Global 3D Motion Capture System and the way of life across the world. A lot of organizations have to fight the battle relentlessly on both. With the emergence of a global economic downturn running into millions and trillions of dollars, expectations are rife that the primary recovery period might also enormously run well into the next year. During the pandemic, the slow growth rate, there are plenty of factors are responsible. The global pandemic leads to several challenges to the 3D Motion Capture System Market sector; it is affected all over the world. Major strategic developments are taking place. MNC are investing more because of the increasing demand from consumers across the globe.


According to the Market Research Future (MRFR), a new research report on the 3D motion capture system market is showing positive graphs. The basic report reflects a modern overview of the basic key components of the 3D Motion Capture System Market Share, the market, and their likely impact on the market’s future growth over the future years. The report is comprehensive. It also contains a different and solid analysis of the primary market’s historical growth trajectory and various key growth drivers and modern restraints. It estimates that 3D motion capture system market to project to grow at a CAGR of 14.10% over the estimated period from the year 2022 to 2030, to eventually reach a valuation of revenue of USD 331.73 Billion.


The modern 3D motion capture system market has been driven significantly by the increasing demand from the latest media and advanced entertainment sector in recent modern years. The increasing need of popularity of various live-action movies, which is significantly based on various comic book characters and other modern innovative characters, has been a primary facet of the increasing demand for various modern 3D motion capture systems from the latest media and basic entertainment sector, while the increasing growth of the adventurous and engaging gaming industry has also primarily added fuel to the fire in recent few years through the 3D Motion Capture industry’s efforts to organize physically more accurate and intensely and amazingly believable various in-game motion and provide modern and a highly realistic experience for modern gamers. The increasing and growing demand for modern sports games are likely to be a primary and major driver for the whole of the global 3D motion capture system market in the recent years to come, as the maximum use of modern advanced physics engines and varied highly sophisticated modern 3D motion capture systems have been primarily the key to the various growing popularity of modern games such as International FIFA, Americal NHL, Madden NFL, and NBA Basketball Live.


In the year of January 2019, the well-known Union College became the very first college in its budget class to buy a modern 3D motion capture system. Motion capture companies are working to overcome constraints. The 3D Motion Capture system will be used to aid enhanced and modern research efforts in various major areas, which include different biology and biomechanics, modern computer sciences, robotics, and modern neuroscience, among others. Various research modern applications could variably emerge as a major or significant consumer for 3D motion capture systems over the estimated period due to the increasing government support to modern and advanced research in various areas such as advanced biomechanics and engineering design in the modern era.


The Motion capture camera or 3D motion capture systems used to record the movements of every object. 3D Motion Capture system facilitates the proper and exact replication of the various complex movements and primary realistic interactions. In addition to this, a lot of other factors like new variations are emerging every day. The primary existence and modern incorporation of such latest and global technologies will definitely lead and drive and enable modern vendors to appreciate the advantage or gain a competitive edge in the Motion Capture Systems marketSegmentation Analysis

The extremely high cost has been responsible for slower increase of the global Global 3D Motion Capture System Market growth over the projected period. Besides, the current pandemic COVID-19 has adversely impacted the Global 3D Motion Capture System Market industry as there has been a slowdown. Top manufacturers suspended the wide manufacturing operations

Primary factors like better situational awareness and increasing demand for better 3D motions are accelerating the growth of the Global 3D Motion Capture System Market. All across the globe, for example, North America, Europe, Asia Pacific, Middle East & Africa, and Latin America, the market is spreading related to the primary 3D motion market during the estimated period.

The primary regional analysis of the 3D Motion Capture system market is being studied in detail for main regions such as Asia Pacific countries, North American countries, Europe, and Rest of the World countries. Technological advancements in the field of modern pixel motion and extremely high definition clarity in various X, Y, Z coordinate of various angular momentum in all three location or directions of various motion analysis has given or driven the primary market of 3D motion capture system in the region of North America and has become popularly leading the Global 3D Motion Capture System.

The Asia-Pacific Global 3D Motion Capture System is projected to grow at the highest CAGR during the estimated period. This increased growth can be basically attributed to the presence of large companies that are largely responsible for the growth in the North American region.

The market players for the Global 3D Motion Capture System are:

Researchers from the Nanyang Technological University in Singapore have developed a precise motion capture system to assist doctors and physiotherapists in consultations and diagnoses for patients requiring rehabilitation after an injury or recovering from an illness.

The ATLAS Institute's B2 Centre for Media, Arts & Performance now offers more varied and exciting opportunities to artists, engineers, creative technologists, and performers. As challenging as the post-flood refit was, it provided B2 with the opportunity to install some exciting new capabilities into the Black Box Experimental Studio and the other spaces that make up B2.

What is the actual valuation of the 3D motion capture system Market?

The 3D Motion Capture Systems Market is Expected to Reach USD 331.73 Billion by 2030

Which region consumes the largest?

Those who study this market growth claims to have a CAGR would be 14.10% during the forecast period.