Please note that the assessment period of report has been updated from 2019-2024 to 2020-2027. Cordially fill Sample form for updated data.

Global Protective Relay Market is projected to grow at a high rate during the forecast period, primarily due to the increasing share of renewable energy sources, expansion of transmission & distribution networks, and rapid growth in the industrialization sector. Moreover, the rising demand for smart grids is expected to present a growth opportunity for the vendors in the global protective relay market.

The global electricity demand is expected to grow at a significant rate over the next few years due to the rise in population, rapid development in urbanization, growing infrastructure activities, and increased access to electricity. The conventional electricity generation sources, namely, coal, petrol, and natural gas, contribute primarily to carbon emissions. Several stakeholders in the power generation industry have begun seeking ways to reduce their carbon footprint and focusing on raising the share of renewable energy sources in the total power generation mix globally. For instance, according to the International Renewable Energy Agency (IRENA), in the US, under the current policies and investment scenario, the share of renewable energy in the country’s total energy generation capacity is expected to reach 10% by 2030. Additionally, according to the Federal Ministry for Economic Affairs and Energy, the German government set a target to have a 40–45% share of renewable energy in the country’s total electricity consumption by 2025.

Moreover, according to the Energy Expansion Plan 2027 published by Empresa de Pesquisa Energética (EPE) under the guidelines of the Ministry of Mines and Energy (MME), an estimated amount of USD 73 billion is planned to be invested in the transmission sector for the construction of 196,816 km of transmission lines within Brazil by 2027. Moreover, in November 2017, the MME invested approximately USD 13.88 billion for the completion of 28 transmission projects out of the total 97 projects in the energy sector. The rising investments in T&D are expected to replace the aging infrastructure to maintain reliability and meet the energy demand worldwide. Such factors contribute hugely to the development of new transmission and distribution networks across the world, which boosts the demand for protective relays. 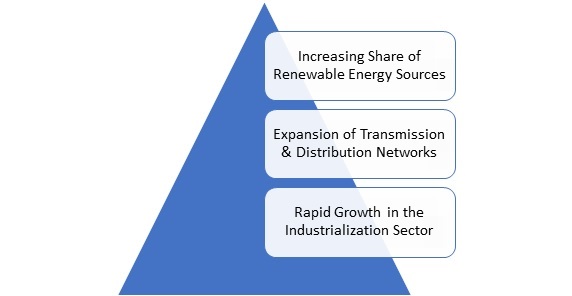 The protective relay market in Asia-Pacific is expected to hold the largest share during the review period. According to an estimate by the US State Department, nearly 387 million individuals in Asia-Pacific live without access to electricity. This demands a continuous need to mount and upgrade the existing T&D infrastructure to serve the rising need for electricity in the region. In China, according to the World Energy Outlook 2017, the average annual investment for power plants and T&D networks in China as per the New Policies Scenario was USD 15.3 billion. Similarly, in Japan, in October 2019, Total Solar International, a subsidiary of Total (France), announced the construction of 52 MW Miyagi Osato Solar Park located in Osato, Japan. Such factors are likely to boost the growth of the regional market during the forecast period.

This study provides an overview of the global protective relay market, tracking two market segments across five geographic regions. The report studies key players, providing a four-year annual trend analysis that highlights market size, and share for North America, Europe, Asia-Pacific, the Middle East & Africa, and South America. The report also provides a forecast, focusing on the market opportunities for the next five years for each region. The scope of the study segments the global protective relay market by voltage, application, operating mechanism, end-use, and region.