In the recent years, there has been a significant change in the warfare technologies and in the landscape of radar capabilities, which have had a direct impact on the security of the countries. Along with the developments in electronic warfare, detection, and range, there has been a simultaneous increase in the development of advanced radar systems, which are being widely used by the global air forces, for targeting, monitoring, and navigation purposes.

In the application segment, weapon guided system has been predicted to record the fastest growth throughout the forecast period, due to its uses and application in tracking and guiding aircraft, missiles, and ships. Weapon guided system helps to compute velocity and changes in the location of the object. Likewise, the rise in demand for highly accurate military radar systems will drive the market growth for weapon guidance segment across the globe. Laser control, ground positioning, and other systems used for weapon guidance require various sensors for working in a precise manner, which is expected to boost the growth of the market over the forecast period.

The global market for military airborne radar is growing due to various aspects, such as the launch of drones, militaries trade systems, territorial conflicts among different geographical regions leads to rise in demand for radar market. Geopolitical uncertainty in the Asia Pacific as well as the Middle East regions is also rising to a larger extent. It is observed that defense divisions and ministries are the primary buyers of military airborne radars in the Asia Pacific region. Aspects such as automation of surveillance and defense technology systems help to optimize the operational activities for the military radar systems. Additionally, the high cost of space-based radars and growing cyber warfare are two key factors challenging the military radar market from achieving its optimum potential. The present vendors of this market will continue to gain new opportunities from trends such as growing use of unmanned combat systems for battlefield surveillance and rise in demand for ballistic missiles, provided they can overcome the problems related to noise disturbances and electromagnetic blocking. 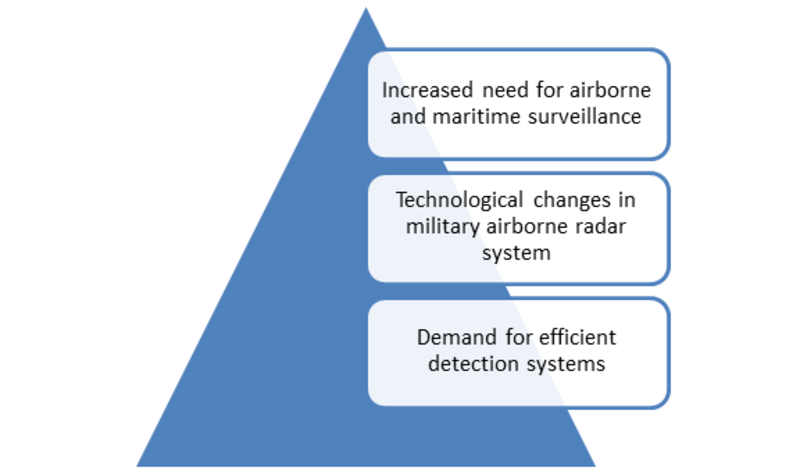 This study provides an overview of the global military airborne radar market, tracking three market segments across four geographic regions. The report studies key players, providing a five-year annual trend analysis that highlights market size, volume, and share for North America, Europe, Asia Pacific (APAC) and Rest of the World (ROW). The report also provides a forecast, focusing on the market opportunities for the next five years for each region. The scope of the study segments the global military airborne radar market by its Radar Type, Application, Frequency Band, and Region.