The Minnesota-based food giant General Mills, which prominently deals in frozen food, has signed an agreement to take over the TNT Crust company, well known for its better-for-you pizza crust. The ever-growing food and beverages industry has been a key factor in developing frozen food products. The rising demand for fast food by the youth has supported the product's growth.

The acquisition of the TNT Crust by General Mills builds upon the advanced strategy made by the company to expand its frozen foods business in the North American region. The strategy has been developed based on the rising demand for the rapidly growing away-from-home frozen baked foods. For instance, in February, the company's business has raised by 24% in North America, which gives the company a strong base in the region.

Moreover, frozen food is the specific food item that needs to be frozen with some added preservatives until the time of consumption. These frozen foods or meals are precooked and packaged with added ingredients. It includes bakery products, non-vegetarian meals, a combination of vegetable meals, etc. The demand for frozen food has been rising since its inception and has been popular amongst the young generation. Frozen food products have gained popularity recently due to the consumer's changing habits and hectic lifestyle.

Additionally, the major players in the market, like General Mills, are constantly focusing on the launch of newly developed products that are more nutritious and healthier. The demand has been boosted since frozen food is available in organic forms and produced with plant-based raw materials. Hence, the rising health awareness caused the augmented demand for organic frozen foods products in the market.

To expand the company's business, General Mills has been focusing on the prominent factors that will alter consumer choices in the region. Considering the TNT Crust company's acquisition, General Mills is significantly focusing on gluten-free and organic frozen food products, which consumers highly appreciate. 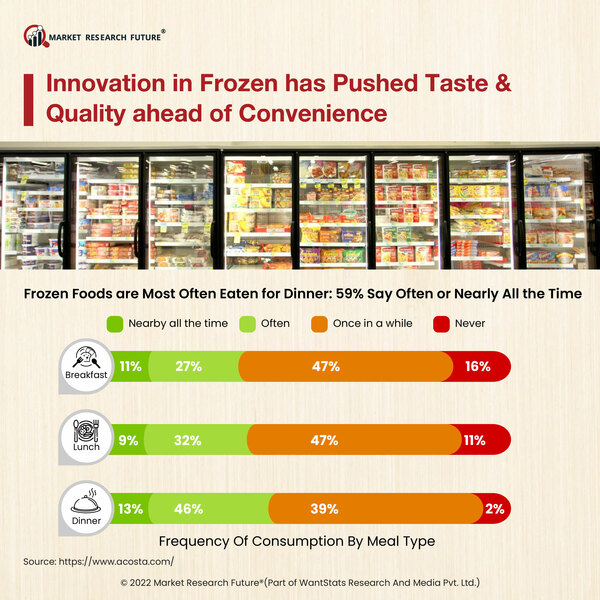