Meet the Top 10 EV Battery Manufacturers in the World

The electrical vehicle (EV) market is booming, but the battery is what makes a Tesla Model S Plaid or a Porsche Taycan stand out from the competition. The electric battery will be the cornerstone of a revolution that the automotive industry will experience in a few decades.

Because of the increased use of hybrid and battery-powered vehicles by drivers and the electrification of automakers' fleets, demand for EVs is expected to continue to rise. EV manufacturers may still face some obstacles. The UK and Germany have cut subsidies, the US is working to lessen its reliance on Chinese minerals and components, and rising material costs are driving up the price of batteries.

An EV is nothing without it, so let's find out which battery manufacturers are driving the EV revolution.

Contemporary Amperex Technology Co Ltd (CATL): CATL is a global energy technology firm and the top producer of EV batteries in China. As a supplier to large EV automakers like Tesla, CATL has many customers in high demand for its goods, which helps the business increase the number of installed EV batteries. Along with supplying Tesla, CATL offers EV batteries to NIO and Volkswagen. It has also announced that it will soon supply the battery cells for Fisker's planned Ocean SUV. In addition, CATL has also invented many battery technologies, including sodium-ion cells and its recently launched EV battery switch brand.

It's simple to understand how a firm like CATL has grown to become the top battery maker in the world, given the wide variety of battery technologies now being researched. To that end, the most recent data for 2022 only reinforces the company's position as the industry leader in batteries.

LG Energy Solution (LGES):  EV battery fire recalls in the US have put LGES under scrutiny, yet the company is still the second-largest battery producer. The company recently announced a new joint venture (JV) battery plant, which Honda that will be built in Fayette County, Ohio, will see an investment of $3.5 billion from the two firms as well as the creation of 2,200 jobs. The JV announcement with Honda supports the company's mid-to-long-term goal to concentrate on North America, the EV market with the quickest rate of growth. LGES intends to strengthen its local supply chain for essential minerals and increase its area's production capacity.

Build Your Dreams (BYD): The company, which Warren Buffett backs, makes batteries sold in marketplaces worldwide while ranking as the third-largest automaker in the world by market worth. Tesla is interested in BYD's Blade Battery technology because it provides a cell-to-pack (CTP) configuration that is more secure and long-lasting. It might soon be found in Berlin-built Model Y EVs. Currently, all BYD's passenger EVs, including the Seal and Han, have Blade Batteries. BYD is now looking to incorporate its Blade Batteries into its commercial EVs, beginning with two new trucks and an all-electric bus platform.

With the soaring demand for eco-friendly cars in China, recent sales data indicate that BYD will surpass LG Energy Solution's market share within the next few months or years.

Panasonic: With plans to invest roughly $4.9 billion in car batteries, supply chain software, and cyber-physical systems, among other things, Panasonic is entering the rapidly expanding market for electric vehicles. According to a statement from the company, investments will be made in automotive batteries, supply chain software, air quality and air conditioning, hydrogen energy, and CPS (cyber physical system) as part of its medium- and long-term growth strategy. In July, the Japanese electronics manufacturer revealed that it intended to invest $4 billion in a battery manufacturing facility in Kansas that would produce and supply lithium-ion batteries to EV manufacturers. The Gigafactory, which operates alongside Tesla in Sparks, Nevada, is already one of Kansas's most outstanding economic development projects.

SK On: LFP batteries for electric vehicles are now being developed by SK On, the battery business of SK Innovation that was formed at the start of October 2021. With all cylinders firing, SK On CEO Jee Dong-seob toyed with the concept of establishing SK On, the world's top supplier of electric vehicle batteries with goods that excel in terms of performance, safety, and affordability. Besides, it claims 17 GWh of global EV batteries and a stake of 5.6 percent.

Samsung SDI: According to a press statement from the company, through "technological competitiveness, better quality, and qualitative growth," the new S-line will serve as the "springboard" to transform Samsung SDI into a trustworthy numero uno company. The S-Line will roughly occupy an area of 6,500 square meters at Samsung SDI's research and development facility in the South Korean city of Suwon. According to Samsung SDI, it hopes to develop "industry-leading research results and production technology for solid-state batteries" with the pilot production. The company has begun manufacturing solid-state batteries on a trial line. In addition to developing novel production techniques, Samsung SDI plans cathode and solid electrolyte manufacturing facilities and systems.

China Aviation Lithium Battery (CALB): Established in 2007 and it specializes in the research and development of lithium batteries, components, materials, energy storage batteries, and integrated lithium products. The company has six major production bases in Changzhou, Luoyang, Xiamen, Wuhan, Chengdu, and Hefei. CALB has ambitious plans to invent new energy technology. Though CALB hasn't yet come up with innovations like its competitors CATL, BYT & Toyota, it is striving to be a global leader in battery manufacturing, with production increased to 300 GWh in 2022.

Guoxuan Hi-Tech: The company has a sizable production presence for lithium-ion battery cells. However, it does not garner as much media attention as China's larger domestic battery companies like BYD and CATL. Guoxuan Hi Tech's flagship lithium-ion battery plant, with its headquarters in Hefei, Anhui province, has a capacity of 8GWh of yearly output. It also has two other battery cell manufacturing facilities operating within China and one more that is currently under development, increasing its total production capacity for 2019 to 13 GWh, or enough to produce more than 236,000 EVs with an average 55kWh battery pack.

Sunwoda Electric Vehicle Battery: The Chinese battery manufacturer is pushing hard to build new production facilities. In the Chinese city of Yiwu, in the province of Zhejiang, Sunwoda plans to construct a new factory with an annual capacity of 50 GWh.The company will invest about 3 billion euros in the new electric vehicle battery plant to produce cells, modules, packs, and complete battery systems for vehicles and stationary energy storage systems. Construction will take place in two phases, with an initial annual capacity of 30 GWh and a further 20 GWh in the future.

It is undeniable that many other emerging companies are working hard to make an impression even though big companies now dominate the market. These new companies may impact the top 5 list sooner than we anticipate, whether through novel chemistry, inventive production, or backing from significant automakers. 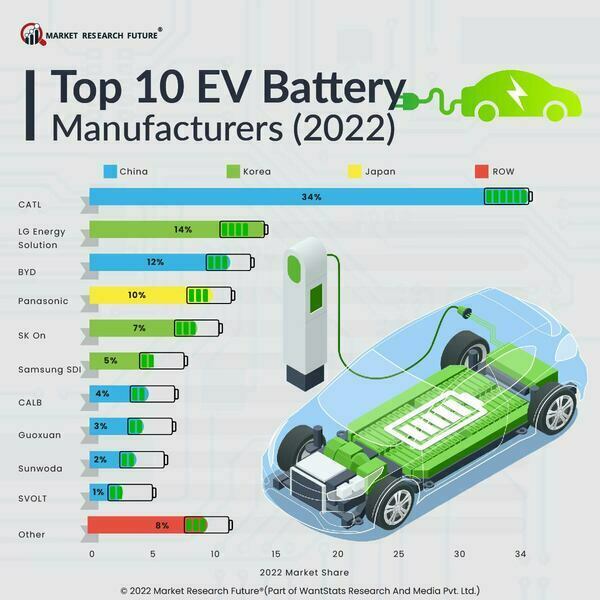 Meet the Top 10 EV Battery Manufacturers in the World