Just a few weeks ago, the world was on the brink of a global economic crisis, baffled by worries about inflation and unemployment, and now suddenly, the skies are clear.

The US Bureau of Labor Statistics recently released the Consumer Price Index (CPI) figures. According to the Bureau of Labor Statistics, food, housing, auto insurance, home furnishings, and healthcare prices rose during the month. . September saw a decrease in inflation to 8.2%, the lowest level since February. Still, a 5% decrease in the cost of gasoline was sufficient to bring the overall inflation rate down marginally.

The inflation rate was lower than economists had anticipated, at 8.1%. That comes after it reached 9% in June, which was the highest in over 40 years.

Although the reported figure's reduction may be welcome news for policymakers aiming to control inflation through rate increases, a closer examination reveals that underlying prices are still rising at a concerning rate.

But other than gasoline prices dropping by 4.9%, there wasn't much proof that prices were going down last month, which is why some of the substantial increases couldn't be offset entirely. Experts have noted that housing is a major cause of inflation, up by eight-tenths, a tenth higher than it has been over the previous three months. It was hoped that it would reduce the owner's equivalent rent by 1%. Clothing sales decreased by 3/10ths and used automobile sales decreased by 1.1%. The economists had anticipated a significant decline, yet the number of new cars arriving has increased by 7/10ths. Gas prices were surprised to drop, but electricity is up by 4/10ths, signaling a forthcoming rise in energy costs.

The recently announced figures will largely determine the US Fed's decisions to continue with aggressive monetary tightening at its upcoming meeting at the beginning of November. According to experts, the central bank will increase interest rates by another 75 basis points at its meeting.

What little uncertainty there was on Wall Street regarding a probable Fed "shift" was dispelled by the September inflation report. Due to growing concerns about a worldwide recession, many investors have urged the central bank to ease up on its current policy course. 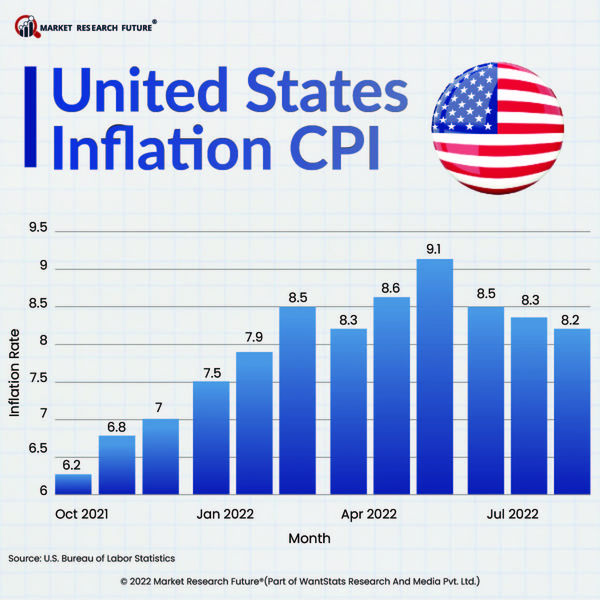