$100 Million Worth of NFTs Stolen in the Last Year

According to a recent estimate by a blockchain research company, the hackers have stolen non-fungible tokens valued at over $100 million in the year leading up to July. The rapidly growing digital asset has become a new threat in cryptocurrency hacking.

Around 50,000 pieces of traditional artwork are stolen each year worldwide, and the black market for stolen art is valued between $6 billion- $8 billion annually. With the new era of digital art, these numbers are increasing exponentially. Artists' communities over social media are going through a rough time. If an artist wants to share artwork on social media, it means opening it up to the public. It allows their followers to amplify it by sharing or supporting the artist. But artists are doing the opposite they are locking down their accounts, suspicious of new followers, and afraid to lose their hard work. All this is because NFTs are causing chaos for artists online.

A Non-fungible token (NFT) is a unique token that designates ownership of a digital good. 'Non-fungible' means it's unique and can't be replaced with something else. So, NFT acts as a digital certificate that says someone 'owns' a piece of artwork. These artworks can either be a picture, music, or a video. Artists, content creators, and art lovers sell and buy these NFTs using cryptocurrency. Most of the buzz around NFTs comes from the fact that they are being sold for vast amounts of money.

Hacks and scams have long marred the crypto industry, while regulators worldwide are increasingly concerned about using crypto assets in cybercrime. At the same time, the actual amount of total NFT theft is estimated to be much higher as not all crimes are reported. It is estimated that the scammers have cashed in an average of $300,000 per theft.

An artist called Beeple sold a jpeg file of 5,000 individual images titled 'Everydays: The First 5000 Days, a digital art collection, for a whopping $69 million. Another artist Grimes sold various works to make $6 million in a weekend. While the NFT investment gold rush has made some artists millionaires, it also appears that cybercriminals are making millions out of this NFT boom. Many artists worldwide report their work stolen and sold by NFT sites without their knowledge or permission. 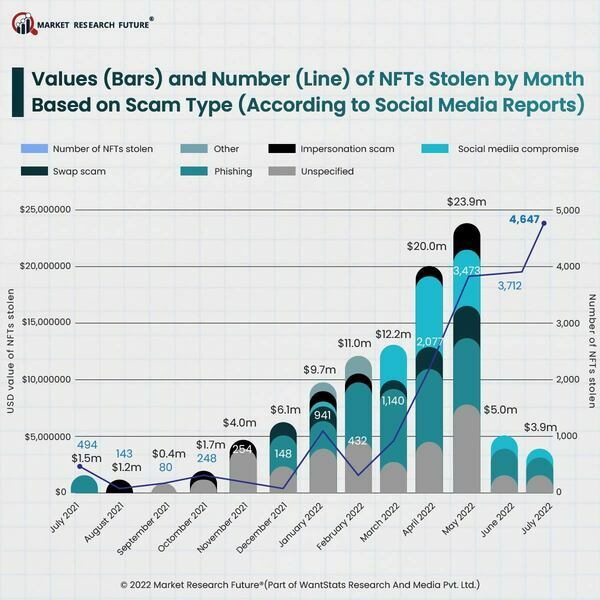 $100 Million Worth of NFTs Stolen in the Last Year