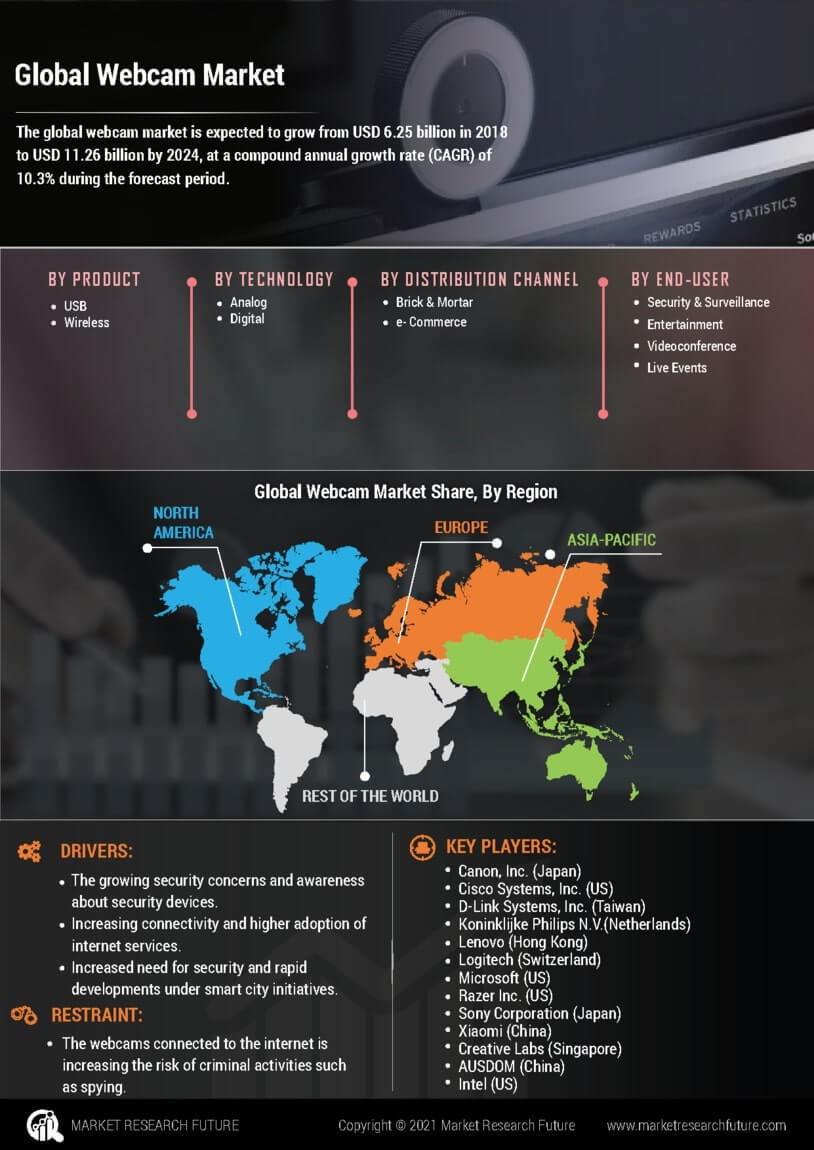 The global webcam market is expected to grow USD 21.3 Billion by 2030, at a compound annual growth rate (CAGR) of 14.20% during the forecast period. Webcams are now evolving from a computer accessory to security devices. The growing security concerns and awareness about security devices have paved the way for the growth of webcams market. Webcam installation is quickly gaining pace in the developing countries, with the growth of smart city projects. One of the main aspects of smart cities is security. Government is installing webcams in roads, kiosks, shopping complexes, and residential areas. The webcams market is expected to witness high growth due to increasing demand from both government agencies and individual consumers. Furthermore, increasing connectivity and higher adoption of internet services is leading to the growth of the webcam market. Smart homes have webcams with an IP address which lets the owner of the house monitor it easily.

Furthermore, these webcams are inexpensive as compared to video cameras; they also allow live face-to-face communication. Some webcams have sensors which can monitor movement and night vision. In the corporate, webcams are used for video conferencing which makes it possible to communicate with people working from remote places. Webcams are extensively used in educational institutes for live classes and also help in recording online tutorials.

A webcam is a video camera which captures or streams image in real time. These images can be shared over a PC. The webcams are equipped with high-resolution lenses and semiconductor chips which capture detailed images and record videos. However, webcams now come with an IP address, which can be connected to an Ethernet or Wi-Fi and used for monitoring smart homes.

The webcam market has been segmented on the basis of product, technology, distribution channel, end-user, and region.

By region, the webcam market has been segmented into North America, Europe, Asia-Pacific, the Middle East and Africa, Central and South America.

Other prominent players studied for the webcam market are Creative Labs (Singapore), AUSDOM (China), Intel (US), Quantum Corporation (US), among others.

Currently, the webcam industry is dominated by large players such as Canon, Inc., Cisco Systems, Inc., D-Link Systems, Inc., Koninklijke Philips N.V. among others. Furthermore, OEMs are focusing on strategic partnerships and agreements to upgrade to the latest technologies and expand their geographical footprint. Big players are focusing on upgrading webcam technologies in order to gain a competitive edge over other industry players. However, other players are also adopting competitive strategies such as innovation, new product development, and market expansion to enhance their growth in the market.

The global webcam market is estimated to grow at a significant rate during the forecast period from 2021 to 2030. The geographical analysis of the webcam market is done for North America, Europe, Asia-Pacific, Middle East and Africa, Central and South America.

North America followed by Europe has accounted for the largest market share in the webcam market, owing to the increased need for security and rapid developments under smart city initiatives. Web cameras are being installed in North America for recording security and surveillance, events, online education, and visual marketing. Asia-Pacific is expected to grow at the highest CAGR during the forecast period because of the government-led installations of webcams. China is expected to be the largest revenue generating country in the region. Presence of several local vendors which provide cost-effective webcams is fueling the demand for webcams in this region. Moreover, the Middle East and Africa, and Central and South America are expected to show significant growth in the coming future.

What is the figure of the valuation the market will be gaining in the year 2030?

What are the growth factors influencing the market to reach the higher position in the future?

The growing security concerns and awareness about security devices have paved the way for the growth of webcams market for the future.

What are the segments involved in the study of the market?

Product, technology, distribution channel, end-user are the segments involved in the study of the market.

What are the important regions selected for the study of the market?

North America, Europe, Asia-Pacific, the Middle East and Africa, Central and South America are the important regions that have been considered for creating better study of the market.

Name the top key players investing for the growth of the market.

Creative Labs (Singapore), AUSDOM (China), Intel (US), Quantum Corporation (US) have been the top influencers of the market who are investing to make the market’s position strong than the past years.