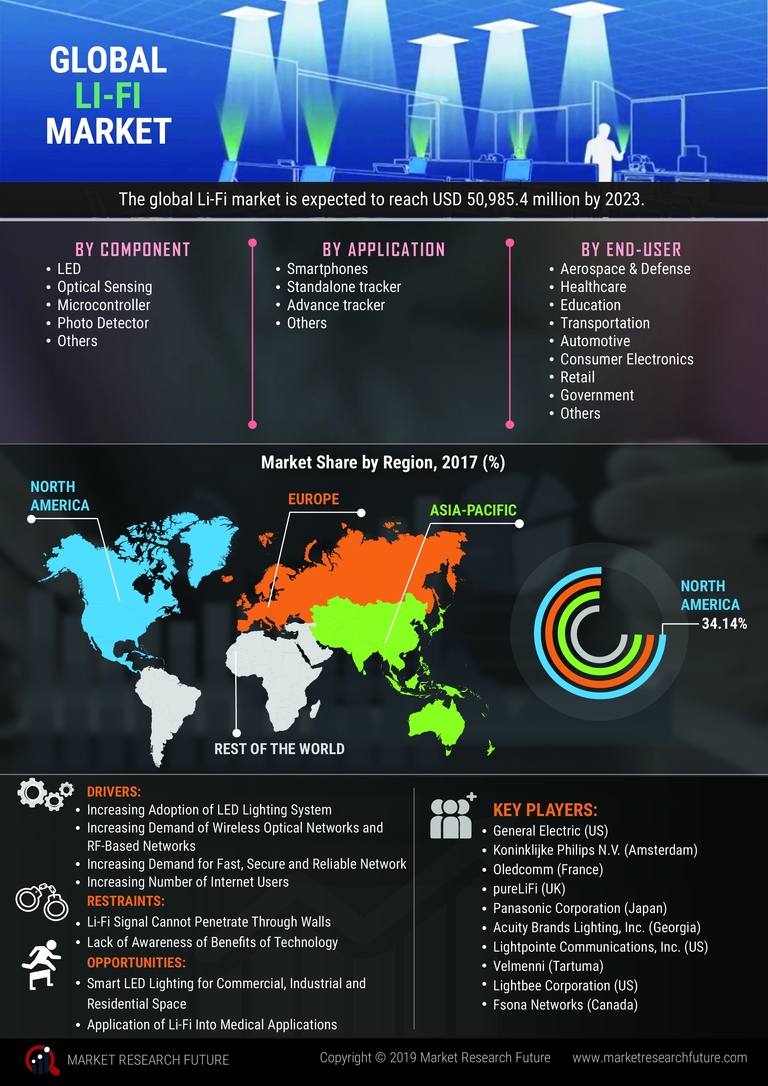 Li-Fi is the emerging wireless communication technology that uses light instead of radio waves for transmitting data. The light communication system is considered a cheaper option to transmit the data compared to the radio waves. The primary components of the Li-Fi technology include the LED lamps which are also cost-effective, able to withstand harsh conditions, and durable. Besides the COVID widespread, the market value of the Li-Fi market can achieve a size of USD 51 Billion by 2023, at a CAGR of 70%.


The COVID 19 has affected several industrial verticals and has affected the overall production rates in several sectors. However, the demand for the Li-Fi was not affected due to the factors such as work from home trends. Increasing demand for internet connectivity as the internet was utilized for entertainment, work, delivery, and several other functions. The countries were also focusing on energy-efficient options in recent times owing to the increasing demand for energy. Such factors have increased the demand for the Li-Fi Market.


The data transmission through a wireless medium is rapidly increasing and the saturation level of the radio-frequency is rapidly increasing as well. Such a state has led to the situation called a spectrum crunch, where the wireless frequency spectrum is becoming scarce for the available consumer devices. Such factors have increased the Li-Fi market demand in recent years.


The developments were increasing in recent years and the availability of the Li-Fi for the general public should be by the year 2022. Already the grocery store in France has adopted the Li-Fi technology to track down the locations of the customers to provide, location-based marketing and other marketing strategies. The smartphones were working on deploying the Li-Fi technology for efficient working.


The increasing development of the Li-Fi products and the end-user industries such as defense, healthcare, lighting, and other end-users were integrating with the Pure Li-Fi and are increasingly allocating resources for the product development and commercialization of the technology.


The utilization of the Li-Fi technology in smartphones is difficult as the smartphones are kept in bags, clutches, and enclosed spaces when not in usage. The mandatory requirement of them in contact with the light sources constantly is itself considered as the primary challenge for the Li-Fi market growth.


The physical barriers such as walls, physical objects that restrict the operational scope of the LED lamps are considered as the major challenges of the Li-Fi Industry. Although the internet connectivity is comparatively faster, the Li-Fi product remains confined within the closed space. The disruptions in the pathways can affect the potential of the Li-Fi technology.


The strategic placement of the LED lamps is essential for the effective functioning of the Li-Fi technology. On the other hand, the deployment requires LED lamps and constant lighting; therefore, deployment in the outdoors can’t be done. Such factors are hindering the overall growth of the Li-Fi Industry.


The market value of the Li-Fi Market is expected to surpass USD 51 Billion by the year 2023 while registering a CAGR of 70%. Since the Li-Fi technology combines indoor lighting infrastructure and high-speed internet connectivity, the demand for the Li-Fi technology industry has increased tremendously in recent years. Further, the increasing developments in the industry and the emerging market players across the globe are stimulating the overall growth of the Market.


The Light Emitting diode is the major component of the Li-Fi technology, which is primarily segmented as red green blue LEDs, organic LEDs, Microlens LED, near-infrared LED, ultraviolet LEDs which are the basic and primary components of the Li-Fi technology. The Li-Fi technologies are expected to be deployed in smart stores, street lights, consumer electronics, and other crucial areas where the demand for wireless communication systems was increasing. On the other hand, the medical sectors were segmented based on applications that include asset tracking, patient tracking, data monitoring, and other crucial functions. The major end-user applications of the Li-Fi technologies are digital signage, hotels, casinos, medical sectors, museums where the light setups were provided efficiently.


Currently, North America is expected to hold the largest market share concerning the Market. The well-established infrastructure and the advancing technologies in the region are expected to provide lucrative opportunities for the growth of the Li-Fi Market. On the other hand, the US navy is expected to showcase higher demand for the Li-Fi owing to the increasing operations in the navy sector.


The Asia-pacific region possesses a growing consumer base for smartphones and electronic gadgets that has been increasing in recent times. Additionally, the potential benefits of the Li-Fi technology such as better connectivity and the increasing demand for the navy and other applications are fuelling the overall growth of the Li-Fi Industry. On the other hand, the declining price of smartphones and the IoT devices with the high data transfer speeds in the Asia-pacific region is considered as the primary driving factor of the Li-Fi Market.


In the year 2020, one of the market players, Nav Wireless technology has adopted the Li-Fi technology in the medical sector for transferring crucial patient data such as ventilator reading, temperature, blood pressure, and so on using the LED lights and wireless data transferring technology. The Li-Fi enabled chip and the USB dongles were connected to the machine to obtain the crucial data of the patients which have facilitated in acquiring the data from various sources.


In the year 2020, the Getac technology has successfully integrated the Li-Fi technology in the mobiles, which has been named as UX10 fully rugged tablet. The rugged tablets were utilized in the applications such as public safety, automotive, energy, and manufacturing sectors.

What are the primary applications that are expected to gain momentum in the forecast period?

What is the major driver of the Market?

The researches for the Li-Fi networking techniques which include multi-user access, interference mitigation, and mobility support are carried out intensively in recent times. On the other hand, the Li-Fi products are witnessing tremendous development in recent years, and are increasingly deployed in smart appliances in smart cities/smart homes for energy optimization. Such factors are considered as the major driver of the Market.

What are the potential benefits of Li-Fi technology?

The Li-Fi is considered the most-economical solution comparatively. The effective applications of the Li-Fi technology include location-based services, mobile connectivity, smart lighting, effective operation in hazardous environments as well.

What are the major components of Li-Fi technology?