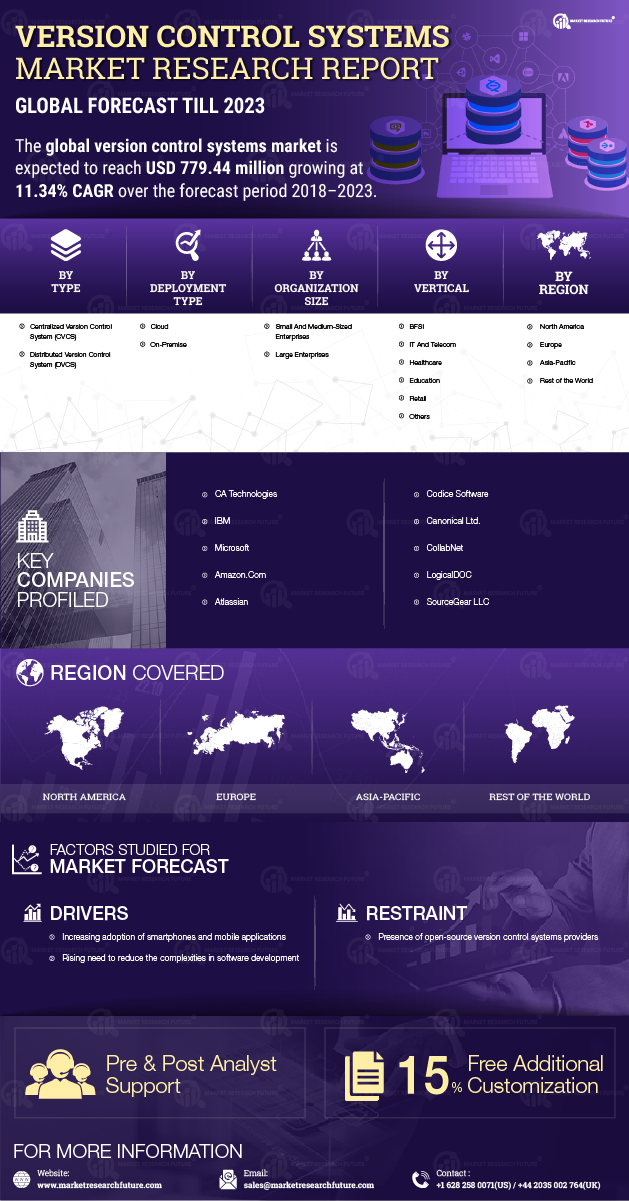 Version Control Systems Market it was being estimated about the rise in CAGR value of about 9.55% with an estimated rise in the USD value of 1150.34 Billion during the forecast period till 2022 to 2030.
Request a Free Sample

With the outburst of Covid, the continuous tracking of the changes in the market was being marked. Transformation in purchasing behavior of the market has been marked. Globally, huge estimation about the new marketing trends and fashion was being observed during the forecast period. Change in value chain analysis and the distribution channel was being observed. The version control systems industry faced an economical downfall during this period. The government has taken several steps in minimising the spreading of the virus.

The rise in the need for reducing the complexities concerning the development of software and applications in certain telecom companies like IBM, Microsoft, CA Technologies, and some of the US-based companies has pushed and has dominated the North American market. Some of the company in the United States and Canadian region has carried out technical advancement and has adopted ceratin cloud-based data and files. Ceratin North American region has covered market share in the whole of the control system market during the assessment period. The Asia Pacific region has held the most dominating market share due to it adopting DevOps by certain organizations. The region here doesn't take care of the dependency issues in adopting certain modernized software. Some of the European regions have shown a moderate growth rate during the review period. This region is very much particular about solving the investment issues by certain technical competitors like Microsoft, Intel, IBM, and some others.

The report provides information about the revenue growth at a global and regional period. It gives a good analysis of the new and advanced industrial trends. It signifies the highly advanced industrial trends being carried out in the market forecast period. It gives information regarding the new technological growth and advancement taking place in the market. It simplifies the key players playing in the industrial field. It simplifies the enhancement of the existing production system and the launching up of new products.

At what CAGR can the version control system market expand?

What is the estimated valuation for the version control system market?

Who are the key players of the version control system market?

CollabNet (US), SourceGear LLC (US), and LogicalDOC (US) are some reputed names in the version control system market.

What is the types of version control systems?

What is the regional analysis of the version control system market?