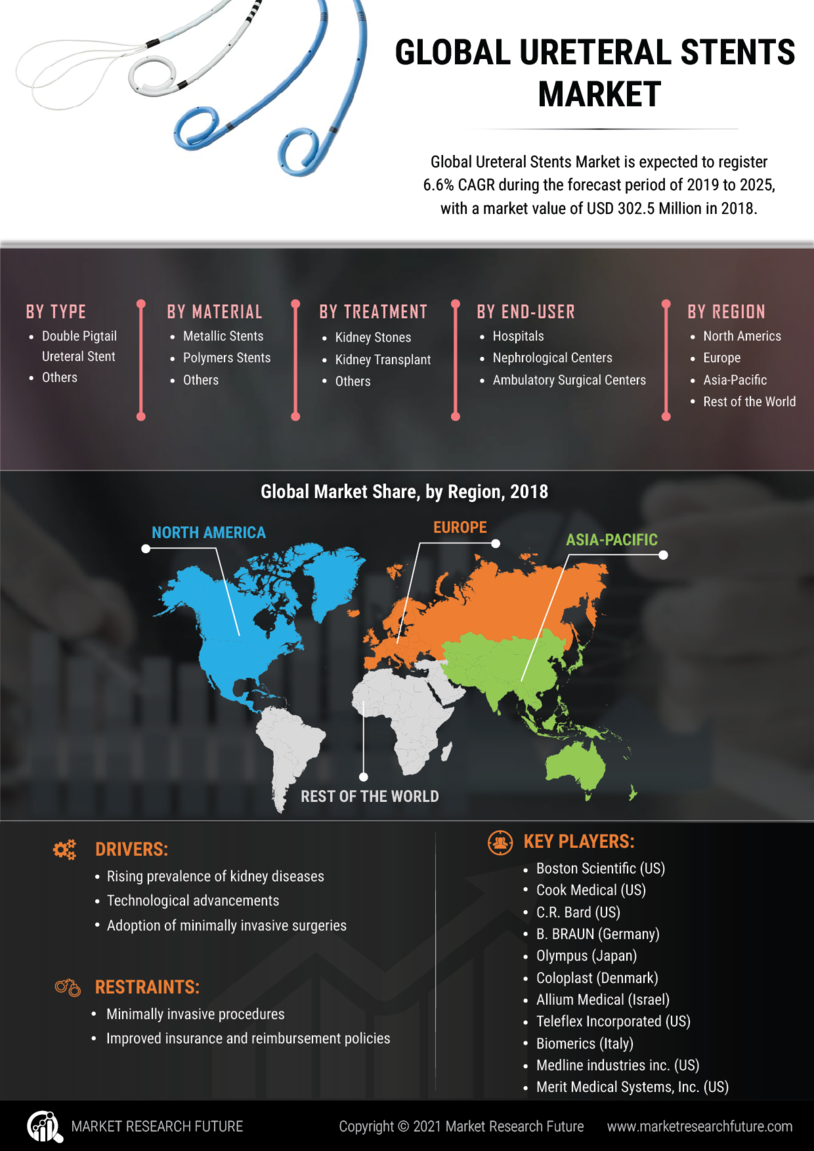 The Ureteral Stents Market is expected to reach USD 682.9 Million by 2030 at 5.7% CAGR during the forecast period 2022-2030. An advantage of the ureteral stent is to obstruct or prevent the flow of urine. The ureteral procedure is very much employed for restoring the flow of urine through the blocked ureters and helps in retaining the functioning of the kidney. The ureteral stents are of length 24cm and 30cm. According to the Global Observatory on Donation and Transplantation, in the year 2016, thousands and thousands of kidney transplants were carried out.

The outburst of the pandemic brought a downfall in the whole of the nation. The production units were hampered thus deteriorating the manufacturing processes. The economic downfall was marked. A change in consumer behavior was seen along with a change in the supply chain.

Global the stent market is pushed up by certain factors like the prevalence of a high number of kidney diseases and the rise in the number of kidney transplants. The growth in technology brought advancement in ureteral stents has led to the increase in ureteral stents market growth. An increase in the adoption of certain invasive surgeries has helped in the improvement of market size. The rise in the incidence of urological ka disease among the old-age people for maintaining the sedentary lifestyle steers up the ureteral stents market size.

Growth in healthcare infrastructure along with the growing investment in some of the developing and growing countries poses up opportunities for ureteral stents market size. Using ureteral stent tracking products brings growth opportunities. The rise in the presence of calcium in our diet, using more dietary animal protein, vitamin supplements, and some for-space travel raises the market size.

The entry of new ureteral stents market players to the market is one of the challenging factors for the growth.

The presence of unskilled professionals and the adverse effect on the marketing infrastructure helps in restraining the market size. Some complications like dislocation, blockage of the ureteral stent, and infection associated with the stent transplant are the hindering forces of the market.

Globally, the market is being classified into type, material, treatment, based on region and end-users.

As per the material, globally the ureteral stents market is being classified into the polymer, metallic stents, and many more. Here, the polymer stent market covers a major market portion due to the presence of high growth of bioabsorbable stents where more technological improvement has taken place.

As per the treatment, market segment have been divided into kidney stones and kidney transplants, and many more. The segment of kidney stone occupies a major segment and major share because of the rising prevalence of kidney stone patients. The multiloop stent is in huge demand due to the little complications so experienced by it. Highly adopting different marketing strategies by certain market players brings up growth opportunities.

As per the end-user segment, the market is classified into medical centers, neurological units along ambulatory surgical sections. Besides it, the hospital unit occupies a large ureteral stents market share as the people here undergo kidney transplant procedures and presence of research activities in medical units.

Technology led to the adoption of various endourological techniques. Due to technology insertion of the stent was made possible which allowed the flow of some of the fragments without hindering the ureter. It is prevalent and is used widely for the treatment of prostate cancer, tumor, thinning the ureter, and scarring on the inner and outer walls of the ureters. The need for ureteral stents has been used widely in ureteroscopy and ureterorenoscopy, posing an expansion of market growth. Globally the demand of the stent market is high till ureteral as during every transplant demand for stents is high until and unless the kidney has been adapted to the patient's body.

12% of the patent population have suffered from urinary stones where the majority of 50% have been affected by kidney dysfunction. The stent industry in Asia has been marked to grow at a high CAGR value during the review period. Here especially in this region the prime focus was given to the improvement in the use of new and advanced medical devices. The industry in some of the European regions has an exponential growth rate during the exponential expansion period thus helping in increasing the expansion of minimum invasive techniques and procedures. Here expansion also took place due to the improvement in the insurance units and the strict reimbursement rules and regulations. The market in the Middle East and African region covers very little share due to the presence of least per expensive indisposable income, especially in this region.

The report gives an in-depth analysis of the new ureteral stents market trends and the future estimations carried out for evaluating the market structure. The report gives information about various key players which helps in determining prevailing opportunities for market development. It gives a comprehensive analysis of the market dynamics, playing a huge role in the market. It gives details about the reformation in the market scenario and helps in the identification of certain players that influence the market globally and regionally. The report analysis is the outcome of the intense study about the market dynamics which makes the understanding of consumer propositions in the business environment. The essence and the role of the key players are highlighted in the market scenario.

What was the value of the global ureteral stents market in 2030?

The valuation of the global ureteral stents market had reached USD 682.9 Million in 2030.

At what CAGR is the global ureteral stents market projected to grow in the forecast period (2019-2025)?

global ureteral stents market is projected to grow at 5.7% CAGR during the assessment period (2022-2030).

What are the major tailwinds pushing the growth of the global ureteral stents market?

Technological advances in ureteral stents and rising adoption of minimally invasive surgeries are the major tailwinds pushing the growth of the global ureteral stents market.

Which region holds the largest share in the global ureteral stents market?

North America holds the largest share in the global ureteral stents market, followed by Europe and the Asia Pacific, respectively.

Who are the top players in the global ureteral stents market?

Cook Medical (US), Boston Scientific (US), C.R. Bard (US), Olympus (Japan), B. BRAUN (Germany), Coloplast (Denmark), Teleflex Incorporated (US), Allium Medical (Israel), Biomerics (Italy), Merit Medical Systems, Inc. (US), Medline industries Inc. (US), and BrightWater Medical (US), are some of the major players operating in the ureteral stents market.