Transcatheter Market Research Report: By Type of Treatment (Transfemoral Approach, Transapical Approach, and Others), by Product Type (TAVR and TMVR), by End-User (Hospitals, Ambulatory Surgical Centers, Others), and by Region-Forecast Till 2030 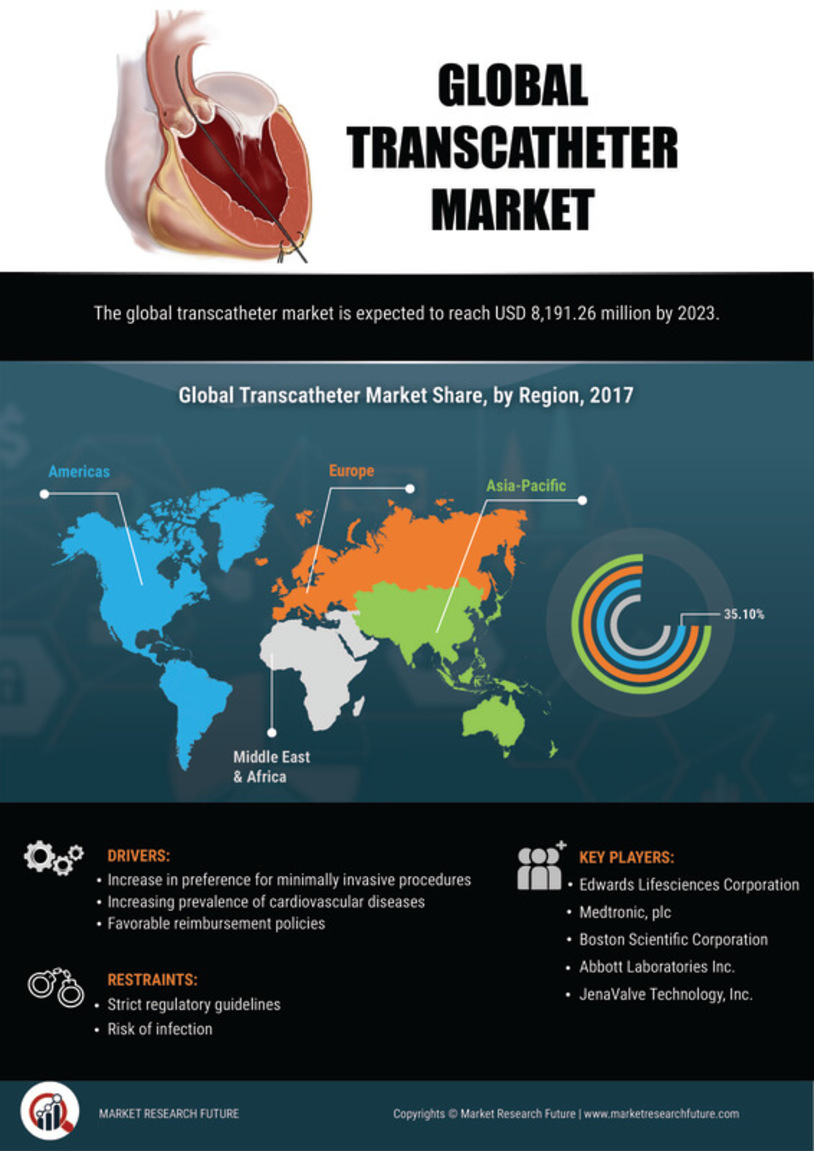 Due to following a hectic lifestyle, the occurrence and recurrence of cardiovascular ailments have amplified throughout the whole world. Additionally, the commonality of hypertension, which is considered to be the prime cause of congestive heart failure and cardiac arrest, has been increasing as well.

Thus, to treat these potentially life-threatening health conditions, the demand for minimally-invasive treatment options is growing as well. According to the experts, this massive demand for the same will prompt the colossal growth of the global Transcatheter Market during the projected forecast period.

COVID-19 Analysis of Transcatheter Market:
The unforeseen emergence of the COVID-19 pandemic has imposed negatively on the Transcatheter market, especially during the initial stage of the lockdown. Thus, the substantial growth of the same was thwarted for a specific period. Additionally, the resurgence of the endemic had also affected the availability of cardiac surgeons to some extent in the wake of pandemic-based restrictions. It, sequentially, affected the market growth as well. Nevertheless, during the latter half of 2020, the market for medical equipment began intensifying again owing to the distinctive symptoms of COVID-19. Due to the lack of awareness, many COVID-19 patients did not get treated within the initial stage.

It, successively, prompted the disease to infiltrate through the heart and cause cardiovascular complications. As a result, the reliance on the Transcatheter increased even more. Apparently, the sudden growth of dependence instinctively resulted in a rapid expansion of the Transcatheter Market as well. Furthermore, there is also a slight change that has been evident in the health equipment market. The manufacturers of the same are pouncing on the same and creating strategic moves to assimilate a remedial step in their offerings. According to experts, it might drive the growth of the market even further in the near future as well.

Transcatheter Market Dynamics:
Major Drivers of the Transcatheter Market
The prominence in the prevalence of mitral valve disorder and other major cardiovascular diseases has been amplifying since the last decade. As per the lifestyle experts, the commonness of the same will increase even more during the upcoming years due to lifestyle-related problems. The Transcatheter module, in essence, is primarily used for treating heart-related conditions. Hence, the ever-rising number of cardiovascular can be considered as the major driving factor in the uprising of the Transcatheter aortic valve replacement market size.


Previously, the growth of the transcatheter market size for Transcatheter aortic valve was more prominent in western countries. However, due to its overall efficiency regarding aortic valve treatment, more and more countries throughout the world are attempting to implement it. It, sequentially, can give a substantial boost to the market growth and prompt it to expand in a desirable manner. Furthermore, integrating various changes (such as equipment or medication) in the same can improve the effectiveness of the medical approach and increase its demand among patients.


The Transcatheter aortic valve replacement is, in essence, a minimally-invasive medical procedure, which is used to replace the aortic valve of the patient. It is done so without the removal of the damaged or older valve. The whole modus operandi of the medical procedure is already quite well-developed and –designed. However, there are still some issues regarding the same available, which can restrain the growth of the Transcatheter aortic valve implantation market. Amongst them, the difficulty of the procedure is considered to be quite prevalent. The medical process, in essence, is quite intricate and, therefore, is prone to failure. Thus, many patients tend to choose the safer options in this aspect. Furthermore, there is no surety that the procedure can be effective for the individual for over ten years. It is yet another aspect, which might prevent an individual to avoid it.


The occurrence of the calamitous COVID-19 pandemic had imposed an abrupt halt in the growth of the Transcatheter Market. So, it can continue to be a threat of the same during the later years as well. Furthermore, the overall cost of the procedure is quite high as well. It can also prompt the patients, who belong to the middle-class segment, to avoid the same. This specific challenge can pose to affect the transcatheter market for a prolonged period.


The approximate growth percentage of the Transcatheter aortic valve implantation market has been recorded at 14.4%. The expansion of the same will excel even more during the latter years and reach the market of $4.67 billion by the year of 2027. The values provided here are based on the current and rising demand for the procedure. It might increase or decrease depending on the strata of the market in the near future. However, the end result will not be much different from the provided expectation at all.

Value Chain Analysis of Transcatheter Market:
Having thorough know-how about the value chain of the Transcatheter heart valve market is imperative to perceive its growth potential. The uprising in the worth of the aforementioned market primarily depends on the usage of technology during the procedure. In the upcoming years, the development and prominence of the same will improve exponentially. Thus, the value of the transcatheter market is also anticipated to increase massively alongside the same.

The vulnerability to cardiovascular ailments among the geriatric population can prompt its growth as well. Conversely, the transaortic segment will predictably depict a stern CAGR rating owing to the frequent usage of the aorta cannulation procedure during ongoing cardiac surgeries.


The end-users in the Transcatheter heart valve replacement market include – the ambulatory surgical center, cardiac catheterization laboratory, and hospital. Amidst them, the hospitals are considered to be the largest end-user of the Transcatheter procedure.

Thus, it will bring in the highest amount of revenue as well. The reasons for such a massive growth can be credited to the patient volume, the profusion of equipment and skilled surgeon, and various insurance schemes covering up the medical procedures.

Transcatheter Market Regional Analysis:
North America to Grow Exponentially During the Forecast Period:
The regional segment for the global Transcatheter Market can be categorized into – North America, South America, Asia, Europe, and Middle East & Africa. Amongst them, North America currently holds the largest share of the market owing to the contributions of Canada and the USA. The utter prevalence of the well-established medical sector along with the prevalence of cardiovascular disease will prompt growth in this region. Aside from NA, Europe will experience the same amount of growth due to similar reasons like the USA.

Transcatheter Market Competitive Landscape:
The Meril Life Sciences PVT. LTD is considered to be one of the key players in the competitive landscape of the Transcatheter market. The organization is primarily known for its innovativeness while creating the necessary equipment regarding the procedure.

The Boston Scientific Corporation is one of the major manufacturers of the implanted devices and coronary stents. They tend to operate through a more direct marketing procedure and create simplified devices to hold the leading position firmly.

The list of key companies covered in the report is -

The report overview of the same is as follows –

Which region will experience the highest growth during the same period?

The North American region will grow the most during this period. However, a similar form of growth can be seen for the European continent as well.

What would be the transcatheter market valuation by 2030?

Transcatheter market would reach up to a valuation of USD 8.900 Million.

What would be the projected CAGR of the transcatheter market during the forecast period (2022-2030)?

The TAVR segment has control of the transcatheter market.

Which end user would dominate the global transcatheter market?

Which are the prime driving factors of the market?

The prime driving factors of the market are – the massive prevalence of chronic cardiovascular disease, minimally invasive medical procedures, and the ever-growing preference for the Transcatheter process.

Medtronic plc accounted for the second largest market share of the global transcatheter market owing to the innovation of less-invasive, miniaturized, and Mechanical Circulatory Support (MCS) technologies for treating patients with advanced heart failure. The company has the ability to create meaningful innovations for hospitals, health systems, and healthcare providers and the ability to deliver the best care possible to patients around the world.

Boston Scientific Corporation is the developer, manufacturer, and marketer of medical devices used in a range of interventional medical specialties. The company held the third position in terms of market share in 2017. It is dedicated to collaborating with healthcare professionals to develop a broad portfolio of meaningful innovations that improve outcomes, reduce costs, increase efficiencies, and most importantly, help people around the world to live longer and healthier. Boston Scientific offers a wide range of products categorized as featured products, medical specialty, and many others.

The global transcatheter market is a promptly growing market and involves the manufacturing of various types of transcatheter for different cardiovascular procedures. Hence, the market is not completely dominated by any one or two players but is fairly divided among the top transcatheter’ manufacturing companies. Many leading players are focusing on the American and European markets owing to well-established markets, huge patient population, and high healthcare expenditures. These players have expanded their market in other regions as well. Major companies have a huge brand identity and product portfolio. These companies have adopted the organic strategy of product launches and acquisitions to gain the market.

Transcatheter Market To Display Stable CAGR Of 13.38% In The Forecast Period