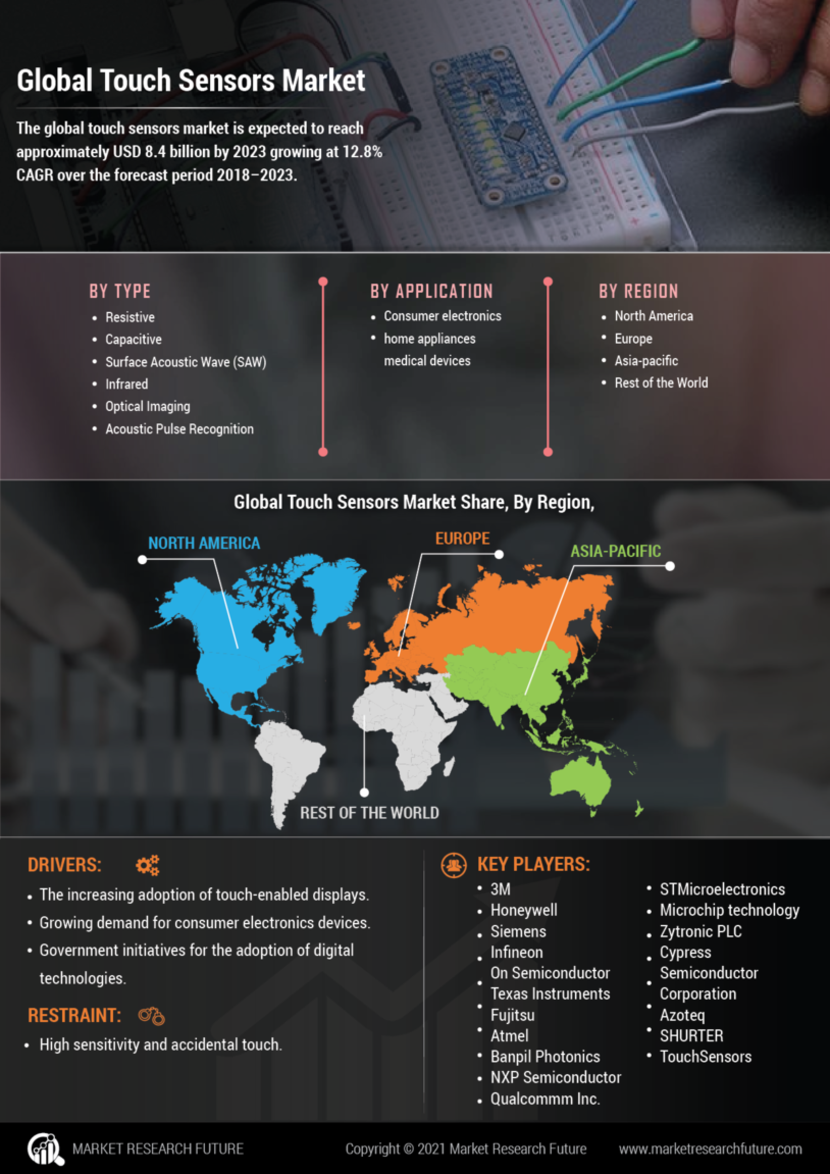 The Touch Sensor Market was valued at USD 4.5 billion in 2020, and it is expected to grow at a higher CAGR of 12.8% in the global market during the forecasted period to account for a higher market share value of approximately USD 8.4 billion by the end of the review period.

Owing to the increasing penetration of various electronic devices such as remote controls, tablets, control panels of various appliances in the automotive and industrial industry increase the demand for Touch Sensor Market. Moreover, this can be further categorized as acoustic pulse recognition touch sensors, optical imaging, infrared, surface acoustic wave, capacitive, and resistive. These touch sensors help in recording and detecting physical contact made between a user and an electronic device. It usually works after applying a little bit of pressure on the screen.

The global pandemic of COVID 19 has affected a major chunk of the population. Many people have lost their livelihood because of this global pandemic. It has affected the dynamics and growth of several industries. Owing to the shortage of vaccines, everyone is concerned about their immunity and follows social distancing. During the lockdown situation, operational activities of various end-user industries were halted which resulted in a demand shrink for the touch sensor market which further leads to decreased sales revenue. The supply chain networks were also disrupted which lead to a decline in profit margin.

However, the touch sensor market is expected to recover from this global pandemic by the end of the third quarter of the coming year by properly strategizing according to the needs of the market.

Numerous factors drive the market growth rate. The capacitive touch sensors (one of the most used sensor) provides various benefits like better durability, longer product life, better optical qualities when compared with other sensor technologies drives the Touch Sensor Market demand in the global market. Moreover, increasing integration of smartphones and capacitive touch sensors drives the market demand during the review period. These are also used for detecting the change in capacitance by checking the presence of conductive objects on the sensor pad. Growing demand for consumer electronics devices is also a contributing growth factor.

The rise in demand for the touch sensor market in the global market. The increasing need to measure the flow, pressure, and level in various manufacturing industries especially in pharmaceutical industries and oil and gas industries provides various growth opportunities in the global market during the review period. Moreover, the use of sensors in control panels consumes less power, provides a user-friendly interface, and controls low and high voltage devices in various electrical appliances boost growth opportunities all across the globe. Increasing government initiatives for adopting advanced technologies also provide growth opportunities during the review period.

The touch sensors market is increasing at an incredible rate in the global market owing to various benefits associated with it. These sensor panels can be sealed which protects the electronic devices from dust and liquid spills. Additionally, it helps in enhancing the physical appearance of electronic or smart appliances. They are very convenient to use as it does not require any mechanical control or switch. Moreover, these are also known by the name tactile sensors and are used in public information displays, cellular headsets, home appliances, home entertainment devices, gaming controllers, and portable media devices.

The touch sensor market has been segregated all across the globe based on the type, application, and region.


Based on the Application

The second-largest market share in the touch sensor market all across the globe is held by the Asia-Pacific region owing to the increasing penetration of tablets and smartphones coupled with early technology adopters drives the market demand in this region. Also, an increase in per capita income is another contributing factor.

The third-largest market share in the touch sensor market all across the globe is held by the European region as it witnesses rapid growth during the review period. Moreover, increasing demand for smart grids and well-established technology infrastructure drives the market demand.

The least market share is held by the Latin American region and the Middle East and African region owing to the presence of low infrastructure in both these regions. Low per capita disposable income is another factor that restricts the market growth in these regions.

The most prominent major key players in the touch sensor market all across the globe are mentioned below:

These major key players use various strategies to sustain their market position in the touch sensors market in the global market by going for mergers, and acquisitions, by collaborating, establishing a partnership, developing a new production process, setting up a new joint venture, developing a new product line, innovation in the existing product, and many others to expand their customer base in the untapped market of the touch sensors all across the globe.

What is the projected market value of the global touch sensors market?

The global touch sensors market is expected to record a substantial market valuation of up to USD 8.4 billion by 2023.

What is the estimated growth rate of the global touch sensors market?

The global touch sensors market is projected to register a moderate 12.8% CAGR in the forecast period.

What is the type segment of the global touch sensors market expected to witness the highest growth?

The optical imaging segment is slated to expand as the fastest-growing segment.

Which is the leading deployment segment of the global touch sensors market?