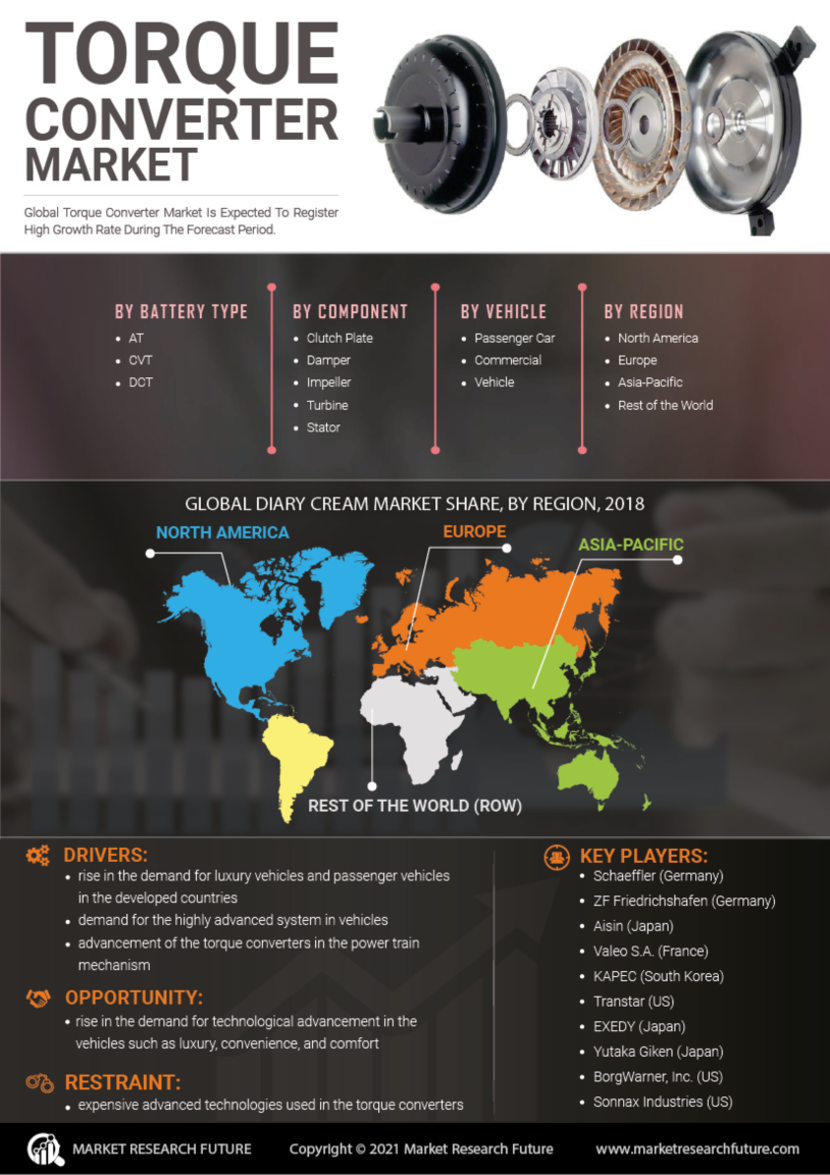 Torque converters are a type of fluid that helps to transfer the rotating power from a prime mover to a rotating driven load. It basically acts as a bridge between the transmission and the engine. The rise in the demand for automatic hydraulic transmission and passenger vehicles in the developed countries of the world is likely to drive the growth of the global torque converter market.

The outbreak of the pandemic has forced many automotive companies to shut the business due to the regulations of the government of complete lowdown; it has placed limitations on the manufacturing operations. Altogether the outbreak of the pandemic has decreased the sales of the global torque converter market and the slowdown in the process of production is likely to hamper the growth of the market.

The major key factor that is driving the growth of the market includes the rise in the demand for automatics in the premium segment vehicles and in the mid-segment vehicles.


On the basis of the vehicle types, the global torque converter market is segmented into two major types one is passenger vehicles and the other is commercial vehicles. According to the reports of OICA, china held 35% of the global torque converter market shares in the passenger cars sales, in the year 2017. The rise in the demand for the passenger vehicles segment is predicted to grow at a faster pace during the forecast period. The growth in the demand for passenger cars in the North Americas and Asia is expected to boost the sales

The investment of the manufacturers is rapidly increasing the medium-duty and heavy-duty trucks, which is eventually boosting the growth of the market in these regions. Based on the reports, in the year 2019, the number of passenger cars manufactured in Germany was 415,500 units, with an increased rate of 4% from the previous year which was 2018. The rise in the demands for vehicles in the developed and developing countries is attributed to the growing production of vehicles. Thus the increase in the demand for passenger cars is expected to raise the demand for the torque converters systems during the forecast period.

What is the main driver of the torque converter market?

Increasing demand for high performance in vehicles is the primary driver of the torque converter market.

What can restrain the torque converter market?

Replacement of converters instead of repair can restrain the market growth.

What is the effect of the COVID-19 pandemic on the market?

The COVID-19 pandemic has negatively affected the market growth owing to inadequate supply of converters from China.

What kind of torque converter is bound to remain dominant?

Which region can lead in the torque converter market?

Asia-Pacific can lead in the torque converter market.

Who are prominent manufacturers in the global torque converter market?

The Global Torque Converter Market Is Expected To Register High Growth Rate During The Forecast P...