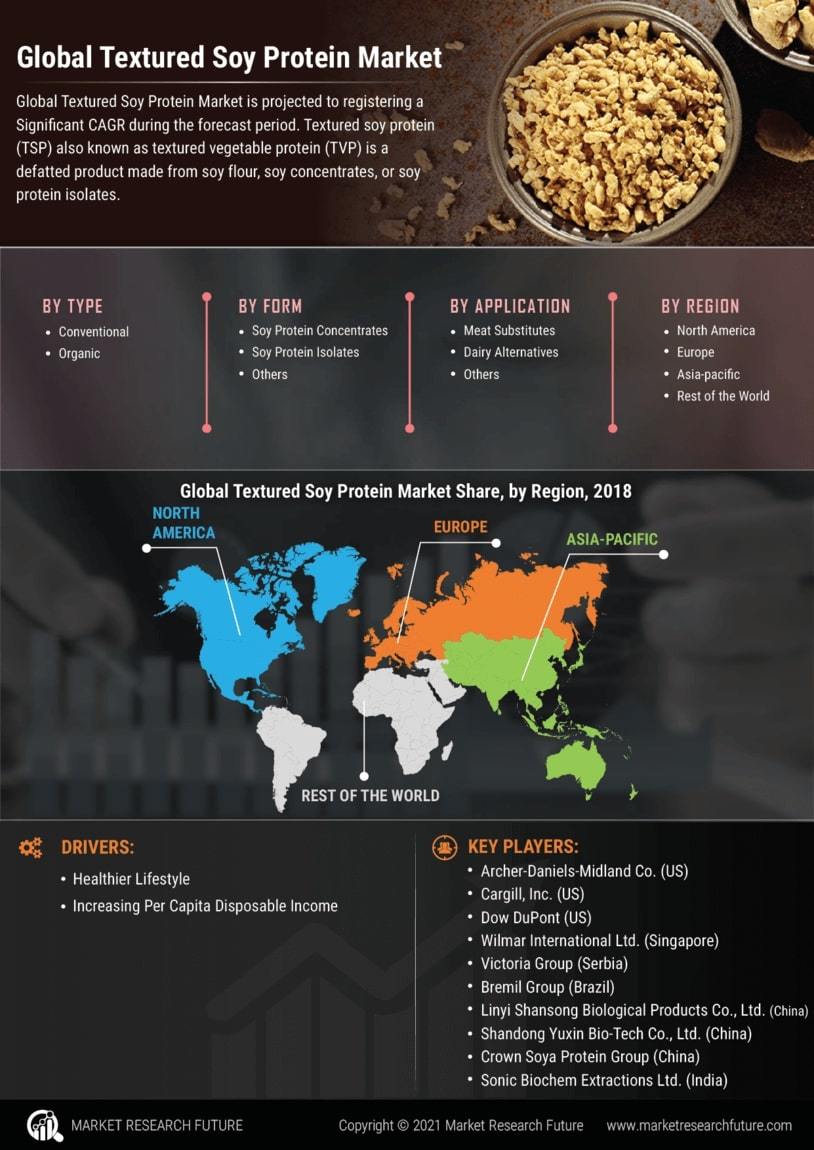 Textured soy protein market is projected to reach USD 4,310.5 million by 2030, registering a growth rate of 9.8% during the forecast period of 2022 to 2030. Textured protein is also called textured vegetable protein so manufactured from soy flour, concentrates of soy, or isolates of soy proteins. It is highly proteinaceous and contains 52% of protein on a dry basis because of why it is said to be a meat analog of the extender of meat. It can be cooked easily and is available as uncolored or caramel color. The textured product is the extraction product of soybean being rich in nutritional diet and excess of protein.

The outbreak of COVID brought a bad impact on the health and also on the financial state of the nation. It led to the breaking down of certain textured soy products deteriorating the production unit and led to shutting off some of the manufacturing units. The outburst of the pandemic hampered consumer interest and disrupted the supply chain.

Drivers- an increase in demand for diabetes and cholesterol levels rise the expansion of textured soy protein market size. It being low in fat and healthy becomes very much famous among the people. The rise in textured soy protein market size also takes place as it is highly common among vegan consumers. It has been a good alternative for meat items as it also has low fat and is as highly nutritious as textured soy. The rise in consumption of a healthy diet which comprises high nutritional value and contains high carbohydrate spurs up the textured soy market growth. It has been very much famous among the old age population, children, pregnant and lactating women. The organic segment is found to be rising at a high rate due to the rise of health consciousness among the population. The rise in demand for animal products increases the attention towards animal care and its welfare which drives up the demand for textured soy market size.

Opportunities- change in consumer preference from meat products to plant products raises the opportunity for size expansion. Less carbon content along with less rate of plant-sourced protein are improving the opportunity for growth. The rise in cultivation of crops basically in South America along with the Asia Pacific region has helped in boosting the industry. The low processing expenses of the industry will help in rising operational costs. As per the textured soy protein market trends, the price of soy has become cheaper.

Challenges- arise in production rate, low costs rate of soy products has helped the suppliers and the manufacturers for rising the growth and has become the most challenging factor. Fewer harvestmen techniques and a lack of efficient value chain analysis have become the major challenging factor. From the textured soy protein market outlook, it has been marked that the customer adopting cholesterol-free food products has become a challenging factor for the consumption of animal protein. The unpalatable taste of the soy products and its unpleasant flavor which is emitted out during the hydration and milling process becomes the most challenging factor for rising textured soy protein market size.

Restraints- consumption of edible products from the animals deteriorates the market size. Meat and some of the meat items are consumed due to their presence of protein sources in regular meals. Besides all this, excess research has to be done especially on textured soy still it becomes a complete substitute and alternative to meat in terms of its taste and nutrition value. This poses a major restriction on the textured soy market growth.

By type- it has been marked that the market has been classified into types, based on region, form, and applications. Based on the type, the textured soy protein market is segmented into conventional and organic. As per the form, the market is being bifurcated into soy protein concentrates, its isolates, and soy flour. The concentrates of soy protein are easy to digest and are available at the cheapest prices. They are found in various forms like granular form, spray-dried form, and flour forms. The isolates of soy are found to be the second-largest segment containing 90% of protein. As per the application, the soy industry is being divided into substitutes of meat, substitutes of dairy products, infant nutrition, products related to bakery, cereals, and snacks and feed types. Regionally, the market has extended its business into China, India, some of Japan along with the Australian region, New Zealand, and some of the regions in the rest of the Asia Pacific region. The soy business in the other rest of the world regions emerges into the regions of South America, the regions of Middle East regions, and some of the African regions.

By technology- technology led to the innovation of organic products which helped in catering to the rising demand of textured soy protein market growth. Technology brought innovation in developing the likable flavor of soy protein. Technology has made efforts in the development of certain factors which has helped in neutralizing the unpleasant flavor which is found during the extraction process.

Regionally and geographically, the North American region covers the most dominant region globally where the population here is opting for the vegan diet more. The North American region is popular because of the rise in consumer soy foods, some of the functional diets, and dairy replacers improving the textured soy protein market size. They very much prefer nutritious and most healthy ingredients as compared to meat and meat products. The rise in per capita disposable income along with a healthy lifestyle led by some people raises the production rate of soy protein in various regions of the world. Moreover, with this, there is an increase in demand for consumption of high protein and various other alternatives for neat products among vegetarians, especially in the regions of North America and some of the European regions. The demand for textured soy protein market has increased in the increasing region of the United States and some of the European Union regions.

The report signifies the forecast revenue growth and also categorizes the textured soy protein and its classification so undergone by it. The report also highlights the nutritional and health claims where the endorsing quality of the food quality has been done. It signifies the manufacturers where the soy protein is offering soy products along with various food claims. It also tells about its adaptation made in the development of meat analogs and the milk substitutes so made. It also signifies the risks associated with the textured products and the growing demand for non-dairy products which helps in rising up the demand in some of the European regions.

Which region is predicted to lead the Market for Textured Soy Protein?

What are the key applications of textured soy protein industry?

Who are the prominent players profiled in the market for textured soy protein?

Which factors may limit the Market for Textured Soy Protein growth?

What are the key factors driving the Market for Textured Soy Protein?