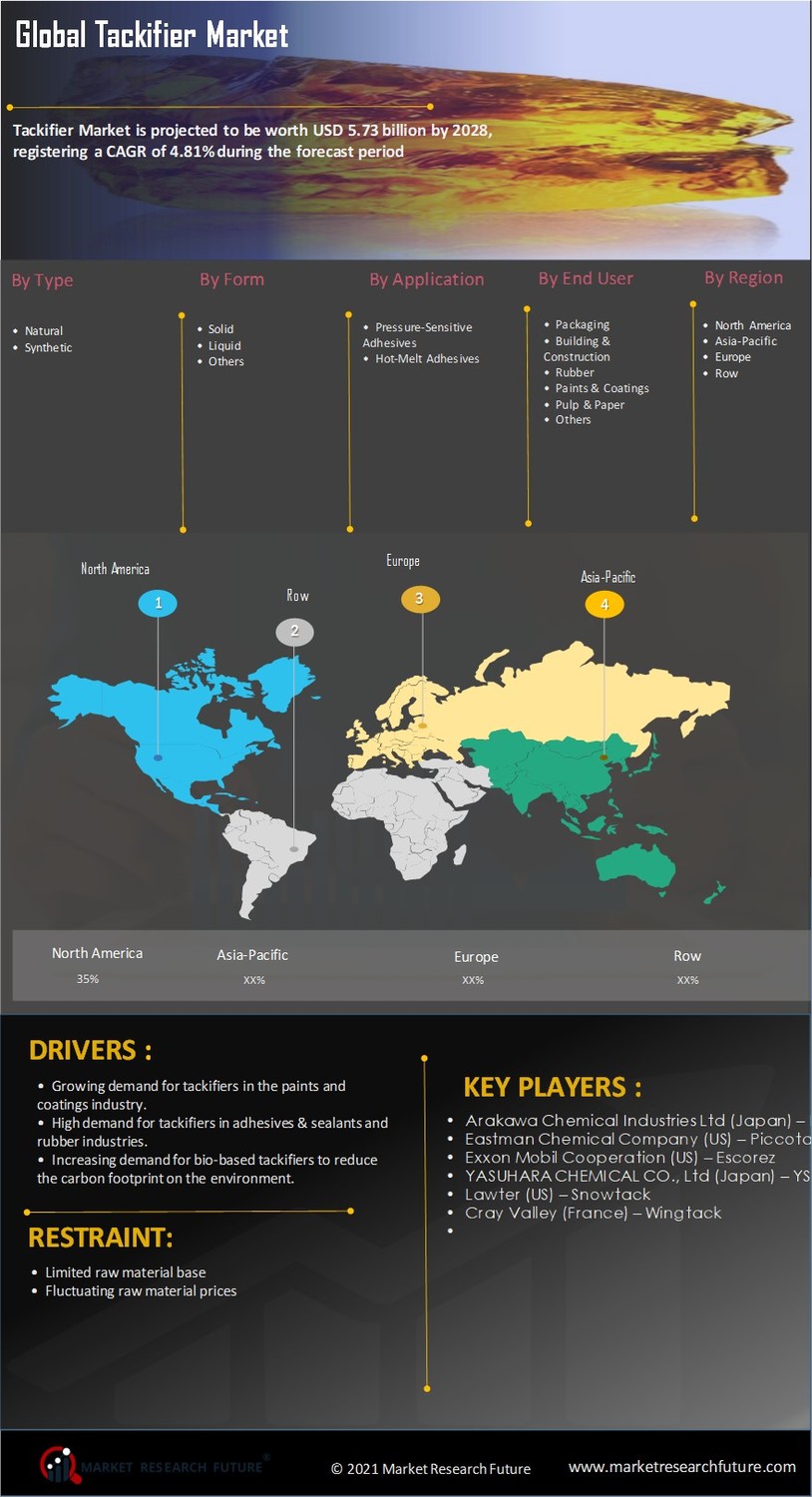 Tackifiers are glassy, amorphous, light molecular weight compounds with a high glass transition temperature that are dissolved in the polymer matrix of adhesive during formulations to enhance the mobility of base polymer, thereby improving the tack and peel adhesion. Tackifiers can be natural and synthetic. Natural tackifiers can be further classified into rosin and terpene and mainly use pine trees and D-Limonene as their feedstock. Whereas synthetic tackifiers are hydrocarbon resins and use various grade of petroleum resin as their feedstock, such as C5 resin, C9 resin, and Dicyclopentadiene (DCPD). Some of the major applications of tackifiers are in hot-melt adhesives (HMA) and pressure-sensitive adhesives (PSA). Some of the common trade names under which tackifiers sold are Escorez, H51000, NEVTAC LT, Bremasin, Korean, ALX-R6100, SYLVARES 520, and LESTAC-A100.

The major factors driving the growth of the tackifier market is the expanding building & construction industry in the emerging countries, increasing production of automobiles, especially in Asia-Pacific, and increasing demand for tackifiers in the packaging industry, wherein they are used in cases, cartons, flexible packaging, labels, and envelopes. For instance, the Indian infrastructure sector witnessed 91 mergers & acquisition deals worth USD 5.4 billion in 2017.

In 2018, among the natural tackifiers, gum rosin was priced between USD 1900–2200 per ton across the globe. The price of the product witnessed a gradual rise of USD 0.19 to 0.40 from 2015. In the same year, among the synthetic tackifiers, the price of petroleum resin varied between USD 1568 and USD 1582 per ton across the globe, with the highest prices in the Middle East & Africa and Latin America. This trend is likely to continue during the forecast period owing to fluctuating raw material prices.

Recent DevelopmentDec 2021 Sika is establishing a new technology center and manufacturing unit for adhesives and sealants in Pune, Maharashtra, India. The new R&D facilities are being built to fulfill the fast-expanding demand in the Indian market, and the new plant is being built to match that need. Sika primarily manufactures items for the transportation, construction, and renewable energy sectors on its three new production lines. According to the company, the new Sika plant is ideally positioned in terms of transportation infrastructure, ensuring swift and dependable delivery to customers at one of the region's important logistics centers.May 2021 SI Group plans to boost its tackifier resin capacity by 75 percent at its manufacturing facility in Lote, India. The expansion of SI Group in India will be completed in two stages. The investment is in response to rising tackifier demand in one of the company's primary markets. The enlargement will be completed in two stages. The first phase will be finished by the end of 2021, with the second phase launching in the second half of 2022. This development follows recent announcements by the business to increase resin capacity in Nanjing, China, and Bethune, France. SI Group will be able to provide regional growth and satisfy strong projections in the Indian tire and vehicle market due to this investment.

At what CAGR is the tackifier market projected to grow during the forecast period?

Which region is projected to dominate the tackifier market?

The APAC region is projected to dominate the tackifier market.

Which type segment will lead the tackifier market?

Which factors are adding to the tackifier market growth?

Increasing use in the paints and coatings industry and demand for bio-based tackifiers are adding to the tackifier market growth.

Which factors may limit the tackifier market growth?

Tackifier Market Outlook and Opportunities in Grooming Regions with Forecast 2025