Synthetic Rubber Market is expected to witness a healthy growth during the forecast period (2020-2030).

Synthetic Rubber is a kind of elastic polymer mainly derived from petroleum byproducts. Synthetic Rubber possess various properties such as elasticity, oil resistant, durability, and excellent water repellant property which make them suitable for various end use industries such as construction, footwear, automotive & transportation, industrial, and others. Moreover, it is used for making polymer concrete for waterproofing, tires, hoses, conveyor belt covers, gaskets, tubes, and others. 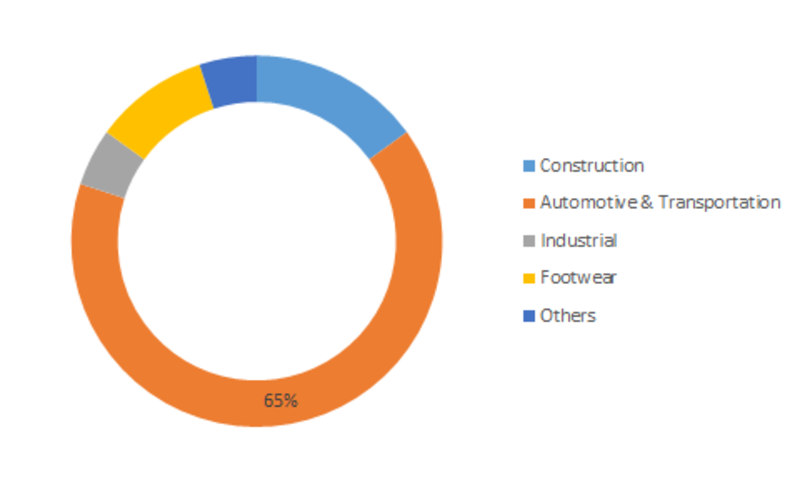 The Global Synthetic Rubber Market is spanned across five regions: Asia Pacific, Europe, Latin America, North America, and the Middle East & Africa. Among these, the Asia Pacific region is expected to grow with a highest CAGR during the review period, 2016 to 2023 due to stable economy and tremendous growth of automotive & transportation industry. The demand for synthetic rubber is estimated to propel in the various countries of Asia Pacific such as China, India, Vietnam, Thailand, Singapore, South Korea, Malaysia, and Japan on account of high adoption rate by the automobile manufacturers. Moreover, growing automotive production as well as increasing demand for industrial products in developing countries along with increasing disposable income of consumer is expected to fuel the growth of the market. Furthermore, rising construction activities in China and India along with approval of large scale commercial, residential, institutional, and industrial construction projects is predicted to fuel the demand for synthetic rubber. Moreover, economic development in Asia Pacific, particularly Vietnam, China, India, Bangladesh, has presented opportunities for Synthetic Rubber in the transportation sector.

Asia Pacific has emerged as the leading market region for Synthetic Rubber followed by Europe and North America. North America is predicted to witness a moderate growth in synthetic rubber due to recovery of industrial sector combined with escalating investments to revitalize industrial sector. In North America, the U.S. is followed by Canada in the regional market growth and both countries are expected to see a significant growth on account of continuous expansion of footwear industry. European countries such as Russia, Poland, France, Italy, Germany, and U.K have emerged as important consumer markets due to developed end use industries and heavy investment on Research & Development as well as innovation. Latin American countries such as Mexico, Brazil, Colombia, Peru, Guatemala, and Argentina are also predicted to witness an average growth due to increasing expenditure on passenger cars and commercial vehicles. Moreover, increasing air traffic in the developing countries such as Brazil, China, India, Malaysia, and Vietnam has resulted in increased demand for tires and which in turn has given a new momentum for the market growth. The Middle East & Africa regional market is predicted to witness a significant growth during the review period due to high adoption rate in various application and is predicted to positively influence industry growth during the assessment period.

In May 2020, researchers from Iowa State University revealed that they had discovered a new process that can significantly improve the durability of perovskite cells, which will boost the intake of solar panels. Perovskite models are already known for their low cost, but these are normally not so durable. But with this new research result, durability will not be an issue. The process includes glass and synthetic rubber chambers to surround the cells and then it includes three sets of international standard tests with temperature. It also follows methods where the test understands its high humidity resistance quality.

What are the different types of synthetic rubber?

What are the raw materials of synthetic rubber?

What are the major drivers for the synthetic rubber market?

The growing automotive industry and the growing demand for longer lasting automotive tires is likely to be the major driver for the global synthetic rubber market over the forecast period.

What is another name for synthetic rubber?

What are the key restraints on the global synthetic rubber market?

Volatility in the prices of crude oil is likely to be the major restraint acting on the synthetic rubber market.

What is the major regional market for synthetic rubber?

Asia Pacific is the leading regional market for synthetic rubber due to the growing automotive industry in the region.

What are the leading players in the global synthetic rubber market?

What is the major end user of the synthetic rubber market?

The automotive industry is the largest end user of the synthetic rubber market, holding a dominant 65% share in the market in 2016.