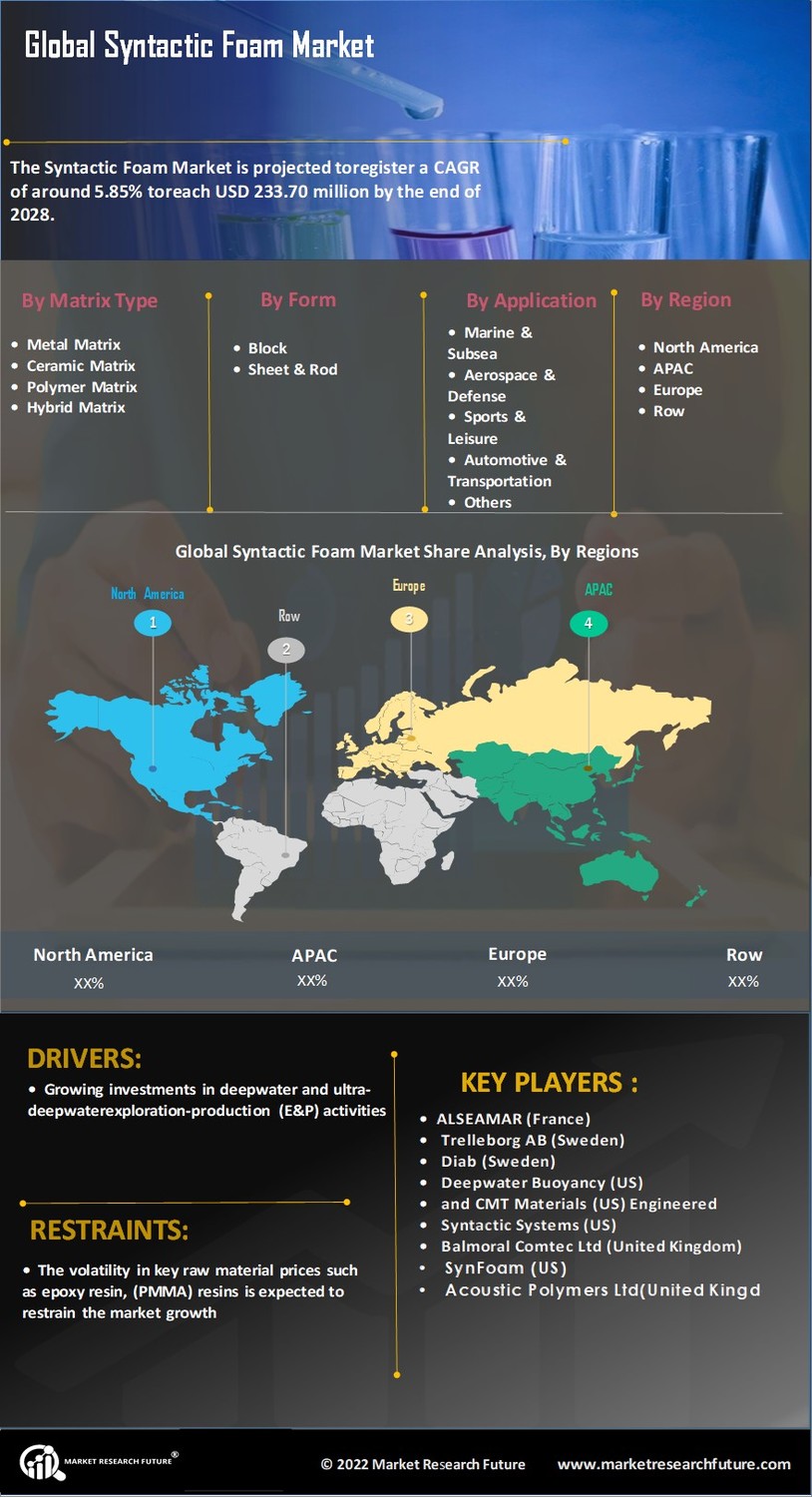 Syntactics foam isa class of composite materials synthesized by dispersing hollow or non-hollow microspheres into a polymeric, metal, or ceramic matrix. Syntactic foams are extremely lightweight and possess unique properties of high strength at low density. As a result, they are witnessing growing adoption in subsea insulation and buoyancy applications. Owing to their superior ability to withstandextremely high hydrostatic pressure and long-term exposure to seawater,they are widely used in deepwater pipe insulations and as buoyancy modules for various marine components used in offshore exploration and production activities.

With the rapid depletion of easy to access onshore oil & gasreserves, major oil & gas companies are progressively making larger investments for developing offshore exploration-production (E&P) platforms. Moreover, technological improvements have paved a path for economically feasible deepwater explorationactivities. For instance, TotalEnergies SEannounced its plans to drill a new offshore well off the coast of Angola. With the expected drilling depth of 3,628m, this will be the deepest oil well ever drilled upon completion. Continental shelves off the coasts of Brazil, East Africa, China, Cuba, the Eastern Mediterranean, and the Gulf of Mexicohave particularly become popular with the major oil & gas companies due to thepotential presence of enormous oil & gas reserves. Thus, growing investments in deepwater and ultra-deepwaterexploration-production (E&P) activities are expected to generate significant demand for deepwater pipe insulations and as buoyancy modules and thereby the demand for syntactic foam over the forecast period.

Syntactic foams can potentially play a crucial role in the aerospace & defense industry in the future. These foams exhibit an immense strength and structural integrity at a significantly lower weight per volume than most traditional materials. As a result, they can be designed and molded into structural components forairplanes & helicopters. Adopting these materials may prove highly beneficial in reducing the overall weight of the aeronautical assembly without compromising on structural strength.

Automotive manufacturers are exploring various avenues to reduce the overall weight of the vehicles to comply with multiple emission control and fuel efficiency norms that are being implemented across the world. Potential adoption of syntactic foams in the automotive structural assembly will help the industry comply with these regulations and aid the future product demand. Moreover, the growing adoption of electric vehicles is also a major boost to the greater adoption of composite materials such as metal matrix composites, carbon fiber composites, and syntactic foams.

However, the volatility in key raw material prices such as epoxy resin Poly(methyl methacrylate) (PMMA) resins is expected to restrain the market growth over the forecast period. Conversely, factors such as growing investments in R&D, increase in microsphere production capacities, and growing adoption of hybrid syntactic foams is expected are prove the key opportunities for the Syntactic Foams Market.

Consumption of petroleum products can be considered one of the barometers to check the health of the global economy. The pandemic outbreak and subsequent implementation of lockdown measures led to a steep decline in demand for crude oil. According to Rystad Energy, the crude oil demand fell by around 27 million barrels per day in March 2020. The OPEC and other oil-producing companies agreed to cut down on production by 9.7 million barrels a day, which is far less than the reduced demand, thereby resulting in an oversupplied market with no buyers. Consequently, the global oil prices remained at extremely low levels for a major part of 2020.

The offshore oil production capacities account for nearly 30% of the total oil production in the world.The precipitous drop in oil prices has led a large number of oil & gas companies to pause and reassess their onshore and offshore drilling activities; this affected the demand for syntactic foams. Moreover, disruption of shipping networks and adoption of strict lockdown strategies resulted in an acute shortage of key raw materials and a significant increase in their prices.

These players are making significant investments in R&D activities to improve their product performance and develop new application avenues for syntactic foams. For instance, Trelleborg AB, a leading producer of syntactic foams, has developed a range of high-performance, low-density syntactic foams with a rate ofa depth of 6,000 meters. These foams are made from high-grade Hollow Glass Microspheres (HGMS)and are highly suitable for deep-sea buoyancy applications.

The Syntactic Foam Market has been segmented on the basis of matrix type, form, application, and region.

By matrix type, the Syntactic Foam Market has been segmented into metal matrix, ceramic matrix, polymer matrix, and hybrid matrix. The polymer matrix segment led the Syntactic Foam Market in 2020, owing to thewide-ranging adoption of polymer matrix in marine and subsea applications. Some of the key resin systems used in the production of syntactic foams include phenol, epoxy, cyanate ester, siloxane, polybenzoxazine, and bismaleimide, among others.The hybrid matrix type segment is expected to grow at the fastest pace during the review period due to its superior mechanical strength and progressive adoption in aerospace & defense applications.

Based on form, the Syntactic Foam Market has been bifurcated into block and sheet & rod.Among these, the block segment dominated the global market because of their wide-scale adoption in the production of buoyancy modules used in the marine and offshore drilling industry. The sheet & rod segment is expected to attain a significant share of the overall market by 2028 based on their rising use in the production of insulated panels and piping insulation systems.

On the basis of application, the Syntactic Foam Market has been segmented into marine & subsea, aerospace & defense, sports & leisure, automotive & transportation,and others. The marine and subsea sector emerged as the largest application segment in the Syntactic Foam Market in 2020. Syntactic foamsare being widely used in a variety of marine and subsea applications owing to their ability to withstand extremely high hydrostatic pressure and corrosion caused by due to seawater. The aerospace & defense segment is expected to grow at the fastest CAGR of 6.23% over the forecast period. Growing adoption of composites in the various aerospace components is expected to emerge as the key factor driving the segment growth.

The Syntactic Foam Market has been studied across North America, Europe, Asia-Pacific, Latin America, and the Middle East & Africa. North America emerged as the largest market for syntactic foam, with 40% of the global market share in 2020. Significant increase in investments for developing deepwater and ultra-deepwaterdrilling and production capacities by the major US-based oil & gas has been the primary factor responsible for growth. Additionally, the rising adoption of composites materials in the US and Canada’s automotive and aerospace & defense industries are further expected to aidfuture market growth.

The majority of the offshore E&P facilities within Europe are located in the North Sea.These offshore facilities require high-performance deepwater pipe insulations and buoyancy modules that can withstand challenging environmental conditions in the surrounding geography. Thus, Europeemerged as the second-largest market for syntactic foams in 2020. Moreover, a significant increase in the production of lightweight, fuel-efficient vehicles by the major European automakers is generating a significant demand for composite materials such as syntactic foams.

The market in Asia-Pacific is expected to register the highest CAGR of 7.12% over the forecast period. A significant increase in offshore E&P activities in the South China Sea, coupled with the rapid growth of the aerospace & defense industry in the region, is anticipated to drive the market growth within the upcoming period.

At what CAGR is the Syntactic Foam Market predicted to grow during the forecast period?

What is the forecast period of Syntactic Foam Market research report?

The forecast period for Syntactic Foam Market research report is 2020-2027.

Which region will lead the global Syntactic Foam Market?

Growing Investment in the Development of Offshore Exploration and Production Facilities is Expect...