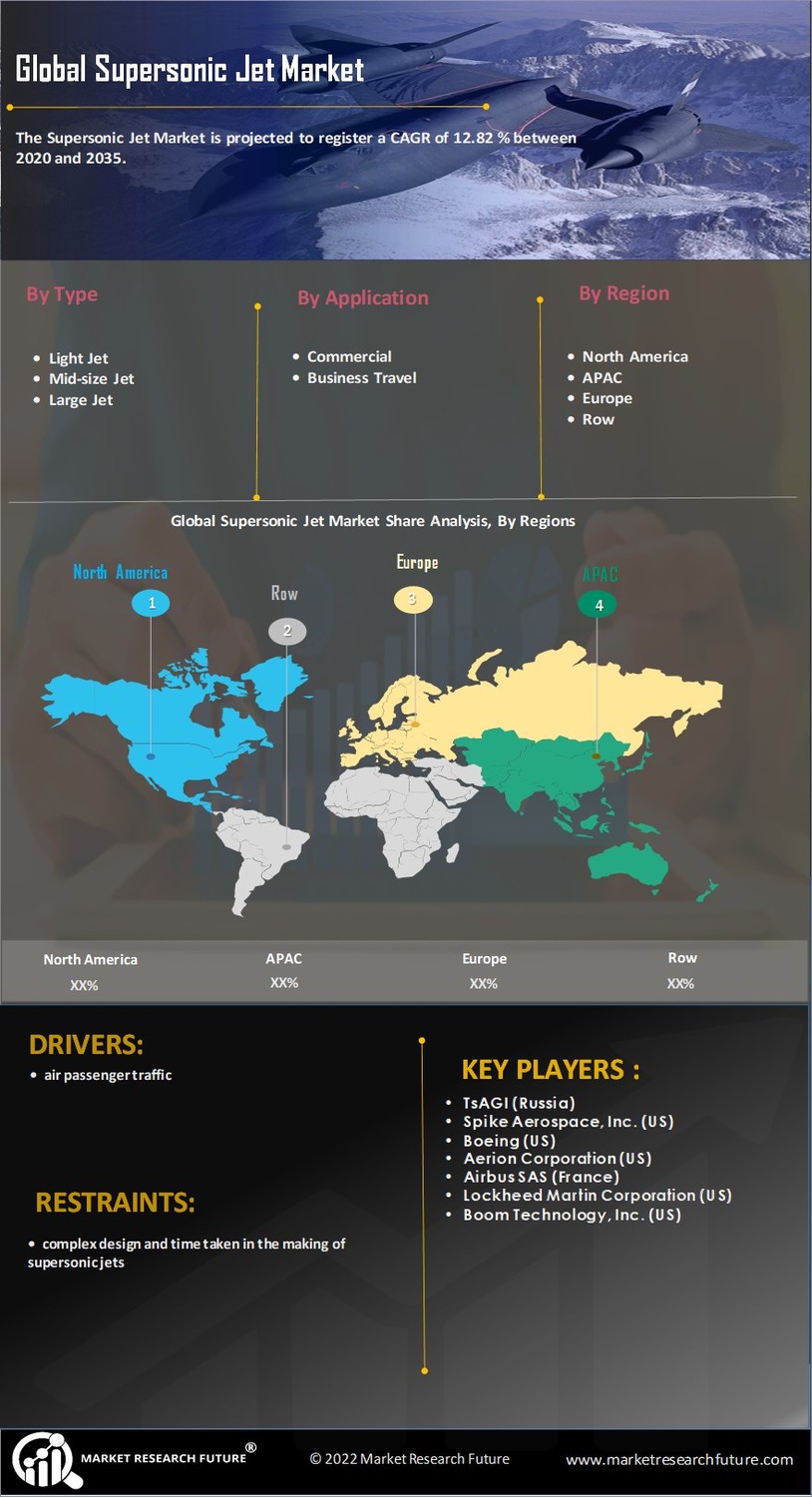 A supersonic jet can be flying faster than the speed of sound (Mach 1). To offer an enhanced traveling experience to passengers and reduce the time of the voyage, there are many companies such as Boeing, a US-based company are venturing into the supersonic jet market. These jets have accommodation capacities of 10 to 50 passengers. These jets are far better than conventional business jets.

The coronavirus pandemic has given a very hard time to most of the manufacturing, developing, production, and logistic units of the market. Due to this pandemic situation, restrictions were imposed by the government of different countries. All types of travel are being restricted due to this covid-19 situation due to which the application of supersonic jets has declined to a large extent. All the manufacturing units have been closed down keeping in mind the covid-19 protocols and because of its manufacture of different parts of supersonic jets have been impacted and the assembling companies are also facing huge losses. No doubt the flying stations of these jets are different from other planes and commercial jets but then also all those stations have been shut down as no person is allowed to travel from one country to another. But there is a ray of hope that as soon as these restrictions are lifted the market will make a powerful comeback with about 60% enhancement in its profits.

The increasing air passenger traffic and due to which encouragement received by the airline operators to invest in aircraft that can adjust more passenger and travel at a faster rate. So this rising air traffic is one of the major factors which is responsible for the growth of this market. Many technological advancements are taking place in the supersonic jet manufacturing sector as the new jets are coming with more seating capacity and, every seat has its own led screen which is already accessed to internet networks. So this is another element that may enhance the expansion of this industry during the forecast period. With the functioning of aerodynamics concepts, the airplanes can fly up to certain heights in the air and the evolving lightweight aerodynamics and composites concepts being applied in these supersonic jets is another factor that will boost the growth of this market.

The structure of these supersonic jets is very complex and dynamic due to which there is a requirement of people with great expertise to make it and everything should be done with perfection. On average a company manufactures a single supersonic jet in 25 days. So this complex design and time taken in the making of supersonic jets are one of the major factors that may hamper the growth of this market. Secondly, a lot of noise is produced by these jets when the engine is started and during the voyage which creates a lot of disturbance to passengers and creates a lot of problems for the crew members.

In the manufacturing of supersonic jets, 3D printing technology is being used at a large scale. As of June 2019, a contract was signed between VELO 3D and BOOM technology Inc. to procure 3D printed metal parts for the new Mach 2.2 model which was expected to be launched within 2 months. The movement of different countries are taking many initiatives and are making massive investments in the supersonic jets sector and are encouraging this sector to extend their applications in the defense sector

The supersonic jet market has divided all across the globe based on type, application, and region.

The market has been divided all across the globe based on the type into a light jet, mid-size jet, and large jet. The light jet is more convenient and consumes less fuel. It can carry 12 passengers at a time. 24 passengers can be carried in a mid-size jet at a time. This jet is more spacious as compared to a light jet. Since it is spacious, it provides in-flight catering and hence improves the comfort of passengers. For carrying more than 24 passengers at a time, a large jet is used. It is more spacious as compared to a medium-sized and light jet. It also contains an entertainment system. Since more passengers can travel at the same time, it results in more revenue generation.

The most prominent major key players in the supersonic jet market all across the globe are mentioned below:


These major key players use various strategies to sustain their market position in the supersonic jet market in the global market by going for mergers, and acquisitions, by collaborating, setting up a new joint venture, establishing a partnership, developing a new production process, developing a new product line, innovation in the existing product, and many others to expand their customer base in the untapped market of the supersonic jet all across the globe.

The supersonic jet market research report discusses the market insights and combines them with the viewpoints of the industry leaders to predict the CAGR growth rate and the market valuation by the end of the period. The report aims to provide an understanding of the revenue cycle by discussing the performance of the market segments across the globe. The report also discusses the recent developments undertaken by the key market players.

Who are the vital influencers in the supersonic jet market in the future?

Which CAGR is projected to motivate the global supersonic jet market in the impending period?

A CAGR of 5.82% is anticipated to direct the market’s expansion in the forecast period.

Which region is spurring the supersonic jet market favorably in the forecast period?

The region of North America is seen taking charge of the market in the forecast period.

Which income levels are foreseen in the supersonic jet market?

The market stands to gain a lucrative income base in the forecast period.

Which reasons are predicted to inspire the supersonic jet market?

The need to gain a heightened traveling experience to passengers is likely to inspire the global market.

Growing Demand for Aerospace &amp; Defense Across the Globe is Expected to Boost the Demand for S...