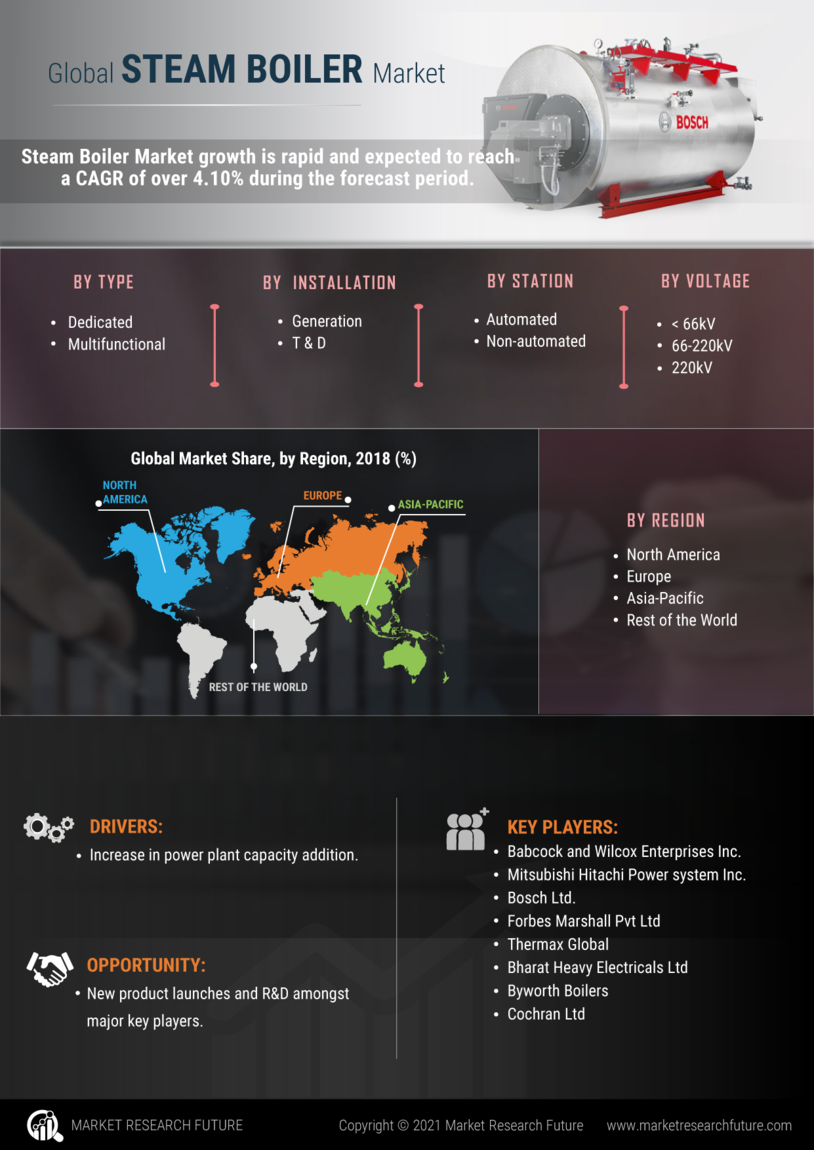 Steam Boiler Market share is projected to exceed USD 21 billion by 2027, growing at a CAGR of 4.10% during the forecast period.

Steam boiler market growth is rapid and expected to reach a CAGR of over 4.10% during the forecast period.

With the growth of industrialization and urbanization, the steam boiler market sector has also grown in demand. Almost every industry across the globe utilizes heat transfer as a source of energy. Major industries like the food industry and pharmaceutical industry involve steam boilers as their primary source of energy. Owing to that steam boilers can function using readily available natural sources like water, which makes them cost-efficient. In addition to that, they are safer and less likely to cause damage to the environment. Steam boilers continue to service both in domestic and commercial sectors. Domestically, steam boilers are used to boil water or to process food. On the other hand, steam boilers that produce higher pressure are required to operate turbines or power plants and are utilized in several end-user industries. They are critically necessary at the hospitals for boiler water.

Like any equipment, steam boilers also require regular maintenance and monitoring. The water level inside the furnace has to be monitored frequently to avoid fire hazards or possibly catastrophic failure. The government has imposed a set of regulations and standards and safety measurements to make the steam boilers or other products produced by their industry work efficiently and upgrade their longevity.

The sample of the metal used to build the furnace undergoes a series of quality tests if the steel does not qualify as IS2002 standard metal. Under the supervision of the Inspecting authority or chief inspectors the tests are conducted and then they are permitted to be used to manufacture the outer body of the steam boiler market

The steam boiler market is moderately fragmented and some of the countries which are operating in the market are listed below:

Like any other industry, the steam boilers industry has also experienced economic shock by the prolonged lockdown across the globe. However, the current financial climate has created both opportunities and fears for the steam boiler industry. Maintenance is the key for the boilers to run efficiently and for that industry require gas engineers, technicians, and other regular employees to work near the burners, monitor the readings, and for maintenance. Following the social distancing, lockdown and reduced manpower have affected the industry negatively.

On the other hand, the current situation has also created growth opportunities for the industry. The Medical and pharmaceutical industries can’t function without the help of steam boiler market. COVID 19 has imposed huge medical and pharmaceutical requirements globally ever reported. Nuclear reactors used to generate electricity rely on steam boiler market. Generating electricity is a crucial aspect of an uninterrupted power supply.

A recent study conducted by a consulting sector reports that some drones are employed to monitor the boilers. This has reduced the overall cost for inspection and reduced the CO2 emissions significantly.

Through the technology advancements, it has been made possible by the manufacturers to design higher performance burners that emit lower fumes and NO2 emissions. They abide by the standards and regulations imposed by the industrial welfare departments. The technology has brought two ways into the market to satisfy the needs of the consumer. The corner firing technology is configured to facilitate the firing using low-volatile coals, they have shown better boiler performance.


The flexibility of the steam boilers is considered a major driving factor by the end-users. steam boiler market are used in varied industrial sectors. Power generation, oil, gas processing industries, chemical, pharmaceutical, metal, and mining are some of the industries that take advantage of steam boiler market.


The steam produced by these steam boilers can be channeled using conventional piping and valve equipment which are inexpensive. The nonflammable characteristic of the steam and its toxic nature ensures a safe atmosphere. The ability of the steam to deliver heat at a constant rate and controlled temperature makes the boilers very reliable. Due to the uncertainty of the current scenario, industries look for energy-saving equipment, on keeping that in mind and comparing steam boilers with other heat transferring systems, steam boilers are less expensive and completely recyclable.


Electrical appliances have a huge contribution to the daily chores of every household and the rise of awareness among the public about electrical appliances has affected the electricity demand. The rapid growth of economic activities also provoked the necessity of power generation. This aspect has stimulated the developing countries to build new power plants and refurbish the older ones. As steam boilers are majorly used up in power plants to run the turbines, we can positively expect the rise of the market in the forecast period.

It is expected that around USD9.5 trillion would be spent on the construction of new power plants globally by the year 2035.


Water-tube boilers operate with higher efficiency and can raise the steam pressures in very little time. They showcase higher flexibility in responding to the load changes and operate at high rates in steam production.


As researchers have continued to produce efficient steam boilers, super boilers are introduced into the market recently, which demonstrates improved efficiency with a considerable reduction in emissions. In conventional steam boilers, $18 billion is annually spent to feed steam boiler market, but this technology advancement is expected to bring down the fuel costs and maintenance costs considerably.

Super boilers are expected to save around 185 trillion but of natural gas which is fed as fuel into the boilers. This energy-efficient advancement will have a huge impact on the rise in the market.


Failures are bound to happen but blasting of steam boiler market can be as catastrophic as blasting of bombs. The failure of safety valves can reduce the efficiency of the steam boilers and can fail to operate beyond repair. Entire refurbishment can cause heavy loss. Premature failure is another aspect that affects the growth of the market.


The costs of the steam boilers vary concerning the design utilized. The budget steam boilers offer a shorter lifespan and higher after-sales costs. Installing advanced boilers perform well, however critically adds to the expenditure of the manufacturing plant.

With the rise of industrialization and increase in the use of electrical appliances and machinery, the steam boiler market value is expected to reach USD 21.63 billion by 2023. The necessity and usage are more pronounced in Asia-pacific and China. As new power plants are being set up across the world, we can expect a higher growth of the market quickly.

The steam boiler industries produce various equipment supporting nuclear plants. However, the steam boilers segment holds a higher market share as the necessity of generating power is observed and expected to drive the demand for the Industry.

The market size of the Steam boiler industry in the US holds $5 billion per year and In China, the estimated steam boiler market size is $4.5 billion by 2027 and is expected to yield returns of 5.1%.

Developed countries across the globe have planned to refurbish their existing power plants and measures t upgrade their steam boilers are in place. It is estimated that about USD 9.5 trillion would be invested in the construction of new power plants from 2014 - 2035. This up-gradation of power plants is expected to boost the markets of the steam boiler market.

Countries like China, Japan, and India are also investing heavily in power plants, this would likely have a positive impact on the market.

According to the service the steam boilers are classified into 2 major categories:

With the involvement of technology, steam boilers have evolved and can run completely automatic. They are called stroker-fired boilers. They are intrinsic inbuilt and operating features, and they provide trouble-free operation, require minimal maintenance, and produce higher thermal efficiency.

They are classified into 3 categories:

Concerning the mechanics involved in the boilers, the boilers are classified into 2 types:

Based on heat source:

Any boiler would require a heat source to produce steam. Different sources of heat are used to produce the steam in boilers and classify them in that category.

As Asian countries stand foremost in terms of population and with the rapid rise of industrialization, the need for power and food processing industries grows higher. Hence Asian countries dominate the market. China is one of the leading chemical producers across the world and concerning the population demand, they utilize industrial boilers on a large scale. The flexibility of the fire tube boilers acts as the major point of attraction for China. This year, Japan has announced that they have planned to construct 22 coal-based power plants hence they are expected to utilize more steam boilers in the future.

Based on the heat source:

What is the market value of the global Steam boiler market?

The global Steam boiler market is projected to record a substantial market valuation due to the capacity expansion along with the higher consumer purchasing power.

What is the estimated growth rate of the global Steam boiler market?

The global Steam boiler is projected to register a moderate 4.10% CAGR in the forecast period.

Who are the key players operative in the global Steam boiler market?

A few major market players operating in the global Steam boiler market are GE (US), Bosch (Germany), Thermax (India), Cleaver-Brooks (US), Byworth Boilers (US), among others.

What is the end-user segment of the global Steam boiler market expected to witness the highest growth?

The chemical segment is slated to expand as the fastest-growing segment.

What is the fuel segment of the global Steam boiler market expected to witness the highest growth?

The coal-fired steam boiler segment is slated to expand as the fastest-growing segment.