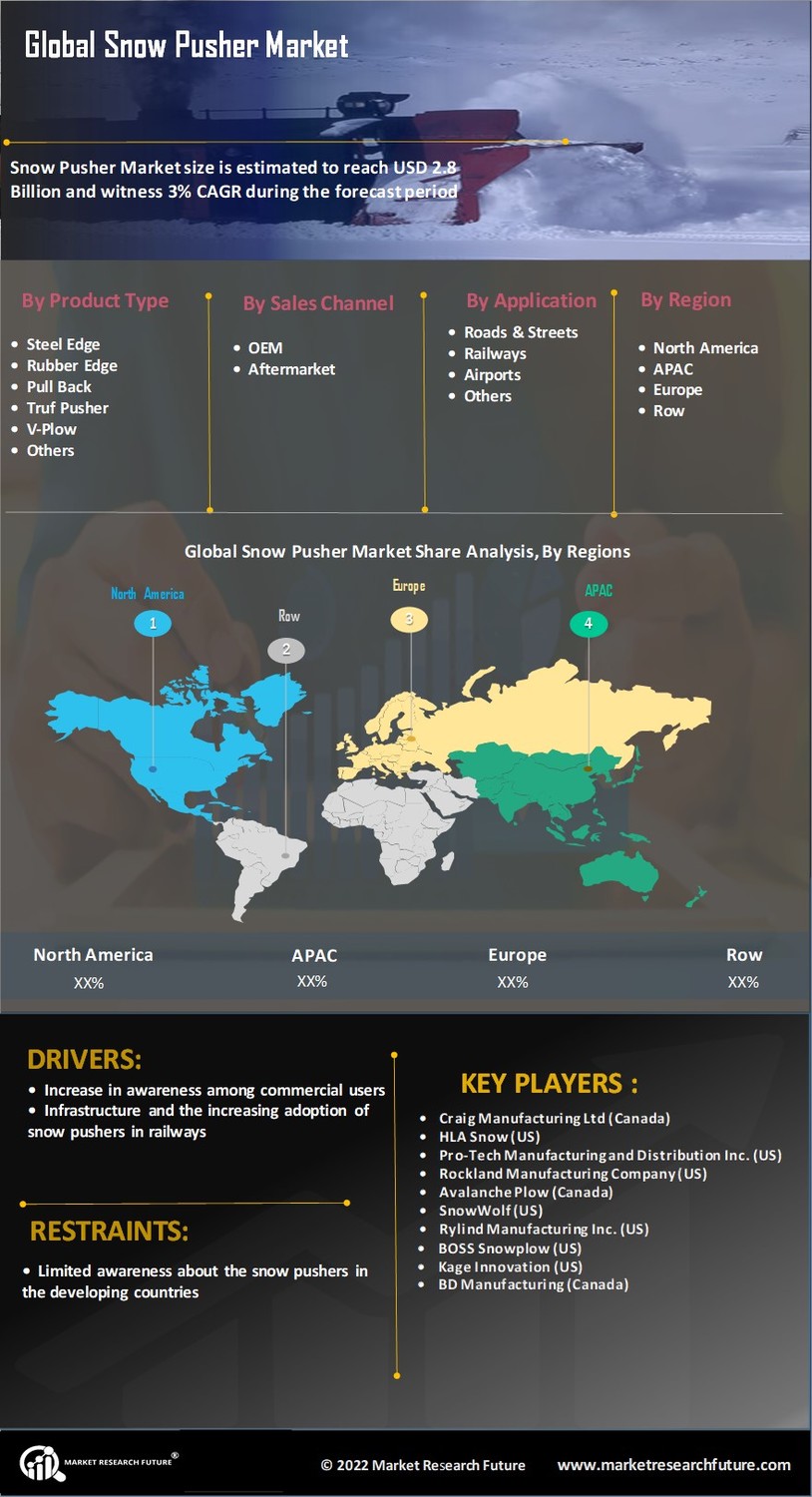 The Snow Pusher Market size is expected to reach USD 2.8 Billion by the end of the Snow Pusher Market Analysis and register a 3% CAGR during the forecast period. A snow pusher is a piece of machinery that pushes snow straight ahead from parking lots, laneways, runways, and other locations. Snow pushers have a concave scoop that is perpendicular to the travel direction and is coupled to a snow-collecting loader or vehicle. Due to increased government restrictions about road safety, the snow pusher business is rapidly expanding. Snow pushers are vehicles that are designed to push snow in a straight line to move it. It's made to clear snow from city roadways, airport runways, and train lines. Snow pushers are efficient and dependable, and they are inexpensive to maintain and manufacture. It's also lightweight and comes in a range of colors and patterns. Snow pusher demand and market are predicted to expand in the future, thanks to increased consumer awareness and increased use by railways. The demand for snow pushers has increased as the number of airports and trains has grown, as has the shift in meteorological conditions in some locations, thus increasing the Snow Pusher Market Size, Snow Pusher Market Share, and Snow Pusher Market Growth.

The coronavirus outbreak, on the other hand, has had a significant impact on most businesses. Manufacturing is one of the most severely hit industries in the world. As a precaution, governments have instituted lockdowns, which have confined individuals to their houses. The lockdowns have made it impossible for automobiles to go on highways and have limited air transport. The global halt in the production of snow pushers has had a significant influence on the Snow Pusher Market Growth and Snow Pusher Market Share. The scarcity of people required to operate snow pushers is also limiting the market's expansion. Because of the governments' initiatives in road safety, the market is projected to rebound following the epidemic. Collaborations between construction vehicle manufacturers and snow-pushing equipment manufacturers are projected to reduce machine prices and boost demand for snow pushers around the world. North America has the biggest market share due to the highest government spending on road safety and a huge number of places in the region that suffer snowfall.


The rising deployment of snow pushers in railways, as well as increasingly severe government laws and regulations related to road safety and infrastructure, are driving the worldwide snow pusher market during the Snow Pusher Market Analysis. Furthermore, during the projected period, increased awareness among commercial users is expected to drive the global market for snow pushers with the presence of various Snow Pusher Market Key Players. During the projected period, the market's manufacturers will largely invest in product development to raise product awareness and expand their snow pusher market share. The developments are likely to raise product awareness and lower capital requirements for market end-users. Such factors are projected to boost demand for snow pushers around the world. To improve their standing in the road safety index, governments in developing nations are investing in road safety and infrastructure. Moreover, over the forecast period, the collaboration of snow pusher equipment and construction vehicle makers is predicted to lower the overall machine cost and increase demand for snow pushers in the global market.


However, the global market's expansion is projected to be hampered by a lack of awareness of snow pushers in underdeveloped nations. The availability of substitute items in the market, such as hand-held snow removing equipment, has reduced the demand for snow pushers, stifling the industry's growth. Due to the COVID-19-induced economic recession, which resulted in lower capital investment, demand for snow pushers fell dramatically in 2020.


Due to the growing need for high-quality and low-cost items, the Snow Pusher Market is expected to have a wide range of applications in snowy areas and others. The rise of the Snow Pusher Market is aided by rising demand from the automotive and aerospace industries, thanks to stringent safety standards enforced by various governments and preventive maintenance of equipment. On the other hand, people have a better comprehension and knowledge of technology.

Based on the product type, the global market has been segmented as follows:

Based on the sales channel, the global market has been segmented as follows:

Based on the application, the global market has been segmented as follows:

Based on the region, the global snow pusher market has been segmented as follows:

North America is estimated to account for the largest market share in the worldwide snow pusher market, as well as the fastest growth rate over the forecast period. The region's market growth is predicted to be fueled by the government's high investment in road and safety, as well as the region's high prevalence of snow-oriented places. Furthermore, during the projection period, the region's demand and sales will be boosted by the continual increase in the snowfall rate. Furthermore, due to the improvement of snow pusher vehicles and the large presence of snow pusher equipment makers, the region has the fastest growth rate.

Due to the existence of multiple global and regional competitors, the worldwide snow pusher market is quite competitive. To strengthen their position in the market, major companies are pursuing tactics such as regional growth and product portfolio expansion. The global market for Snow Pusher is extremely fragmented, with international and regional manufacturers competing for a larger portion of the market and a wider consumer base. The major Snow Pusher Market Key Players are as follows:

Fisher Engineering, a snow removal, and ice control equipment maker, has unveiled two new snow pusher models. These versions are designed to be used in a variety of machines, including skid steers, wheel loaders, backhoes, and tractors.

Expansion of product portfolios through the introduction of new brands has been one of the most widely used techniques by businesses to increase product reach.

The study on the Global Snow Pusher Market includes thorough primary research. To acquire a deeper understanding of the market and industry performance, numerous industry experts and key opinion leaders conduct a complete examination of qualitative and quantitative elements. The report also gives a thorough picture of the current market situation, including historical and projected market sizes in terms of value and volume, technical advancements, macroeconomic considerations, and market controlling factors. The research includes detailed information on the strategies of the industry's leading firms, as well as a thorough examination of the various market segments and geographies. To help businesses better understand distinct customer proposals, the study looks at many elements that affect market dynamics, as well as main and associated industries. The study examines the primary driving and limiting forces in the international industrial radiography market in depth.

This study includes a quantitative examination of the present market as well as estimates to help identify market opportunities.

At what rate is the Snow Pusher Market expected to register growth?

What is presumed to be the valuation of the Snow Pusher Market by 2025?

Who are the prominent players of the Snow Pusher Market?

Which application segment is poised to dominate the Snow Pusher Market?

The roads & streets application segment is supposed to dominate the market.

Which sales channel-based segment is expected to dominate the market?

The OEM segment is presumed to dominate the Snow Pusher Market.

Snow Pusher Market is Projected to Witness 3% CAGR by 2027