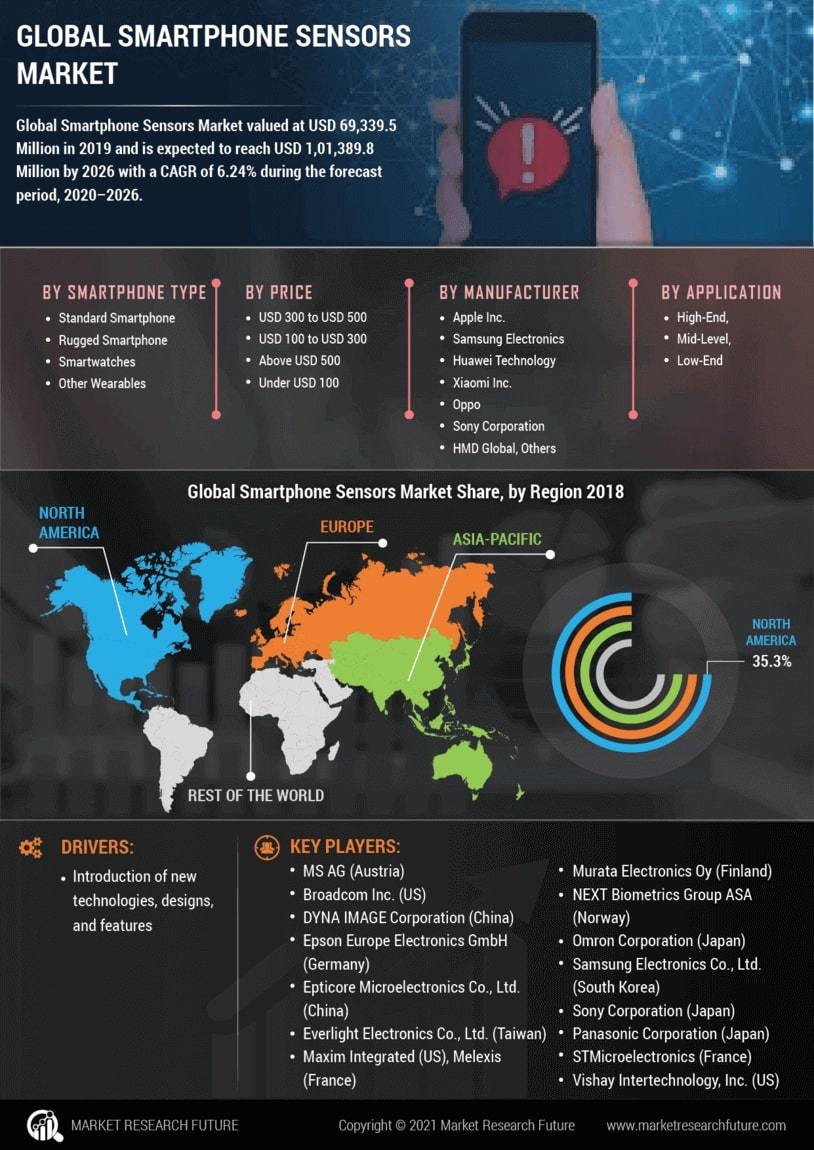 Smartphone Sensors Market valued at USD 69,339.5 Million in 2019 and is expected to reach USD 1,01,389.8 Million by 2026 with a CAGR of 17.50% during the forecast period, 2020–2026.  Sensors are devices or equipment that detect a variety of factors such as fingerprints, pressure, temperature, and so on. Sensors play an important part in smartphones because they are used to collect various information and data linked with various installed applications. Sensors are required for the operation of various applications on cellphones. Furthermore, image sensors are required to accomplish tasks connected to photography and cameras, while smartphones require accelerometers, gyroscopes, and touch sensors to operate gaming applications. Every day, smartphone sensors become more advanced resulting in Smartphone Sensors Market Demand. These sensors are a substantial improvement over traditional sensors in that they allow for the automatic collecting of environmental data with a significantly lower error rate. Over the forecast period, the Smartphone Sensors Market Size and Smartphone Sensors Market Share are predicted to grow due to increased use and penetration of the internet of things (IoT), as well as increased automation in automobiles and smart wearable systems for health monitoring.

COVID-19 has quickly spread throughout the world, having a significant impact on the Smartphone Sensors Market. Most countries' supply lines have been interrupted as a result of partial or complete lockdowns. Sensors are important in smartphones because they collect a variety of data and information that is linked to the many applications that are installed. Different characteristics, such as temperature and pressure, are sensed by these sensors. In cellphones, many sensors perform various duties. Governments have implemented preventive measures such as lockdowns and business closures in response to the COVID-19 pandemic, which is negatively harming the Smartphone Sensors Industry. The suspension in manufacturing activity has led to a global delay in smartphone production, which has had a substantial impact on the Smartphone Sensors Industry.

Smartphones are incorporating a variety of new technology. 3D sensing, Lidar, and augmented reality are just a few of the new technologies available. With the advent of new technology, designs, and features, the worldwide smartphone market has experienced phenomenal growth. Global smartphone shipments are predicted to exceed 1.5 billion units by the end of the forecast period. During the projected period, this is expected to boost the Smartphone Sensors Market Demand. Sensors detect environmental changes and movement and turn them into electronic signals that the phone can process.

With a market value of USD 24,149.4 Million during the historic forecast period, Asia-Pacific held the greatest market share of 35.3 percent; the market is predicted to grow at a CAGR of 7.6 percent over the forecast period. Europe was the second-largest market, with a value of USD 20,358.6 million; the market is expected to grow at a CAGR of 5.6 percent over the next five years. In terms of revenue and market share, Asia-Pacific dominates the smartphone sensor industry. Because of the presence of major key companies in the region, the region will maintain its dominance over the projection period. Growth and expansion of important businesses, as well as increasing marketing expenditures, will drive demand for smartphone sensors even higher. Due to rising urbanization, lifestyle changes, and greater smartphone penetration in undeveloped countries, Asia-Pacific is likely to see a considerable growth rate and project the highest compound annual growth rate during the forecast period. The availability of abundant raw materials and low-cost labor will fuel the expansion of the smartphone sensor market.

The Smartphone Sensors Market is highly competitive, with a large number of national and international companies. To increase their reach and maintain their market position, the leading firms are employing techniques such as product innovation, mergers, and acquisitions. The competitive landscape for cellphones sensors includes information on each competitor. Corporate overview, financials, revenue generated, market potential, investment in R&D, new market initiatives, regional presence, company strengths and weaknesses, product introduction, product width and breadth, and application domination are among the details presented. The information presented above is only about the firms' concentration on the smartphone sensor industry. The major Smartphone Sensors Market Key Players in the market are as follows:

What valuation will the market gain in 2027?

Mention the growth period for the market.

As per the study conducted, the market’s growth period is considered to be from 2021 to 2027.

In the segmental analysis, which segments are being involved in the study of the market?

In the segmental analysis, the type, Application Sensor Type are the segments involved in the study of the market.

What are the key market players investing in the market share?

North America, Europe, Asia-Pacific, and the rest of the world to the essential vital players investing in the market share.

How Asia Pacific region is positioned on the top in regional analysis of the market?

As Asia-Pacific accounted for the largest market share, it has been so because of high investments being made by the companies for the development of new sensors. Rising urbanization and demand for smartphones have also surged the demand for sensors here.

Smartphone Sensors Market is Expected to Attain an Outstanding Valuation of USD 1,01,389.8 Millio...