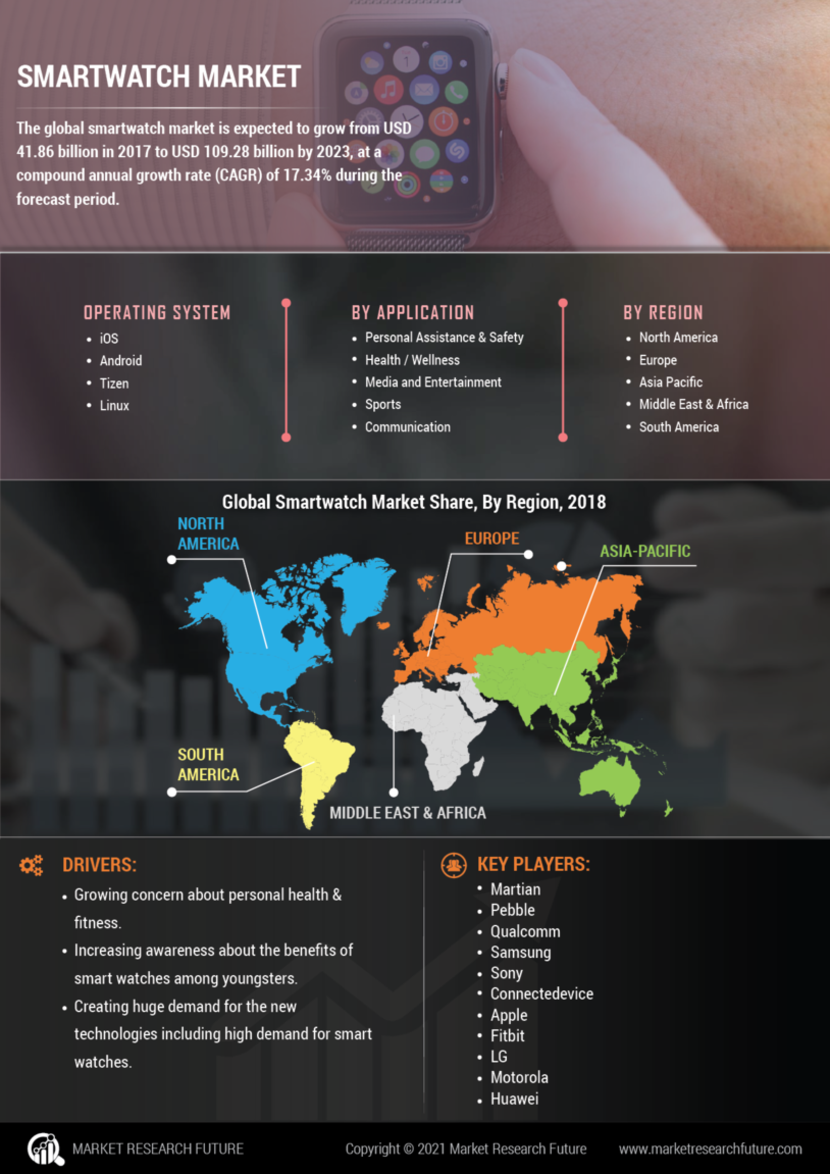 The market for smartwatches is expected to grow from USD 41.86 billion in 2017 to USD 109.28 billion by 2023, at a compound annual growth rate (CAGR) of 17.34% during the forecast period. Growing concern about personal health & fitness and the rise in use of smartphones are the key factors driving the growth of this market. Moreover, innovative features such as tracking, alerts, and connectivity in smartwatches have garnered consumer interest in recent years. Smartwatches based on operating systems (OS), such as Tizen and proprietary OS, are expected to show significant growth during the forecast period. Additionally, huge sales of Samsung Gear S3 have escalated the company’s interest in investing more in the development of smartwatches, that emphasizes a strong growth of smartwatch market in the coming years. The integration of IoT technology is also expected to enhance the capability of smartwatches to serve the purpose of multiple apps and devices. Furthermore, hybrid smartwatch between a traditional and a smartwatch can create new opportunities for the players in the smartwatch market. A hybrid smartwatch offers the features of a regular smartwatch with some connected features but without a touch display or a charging functionality. 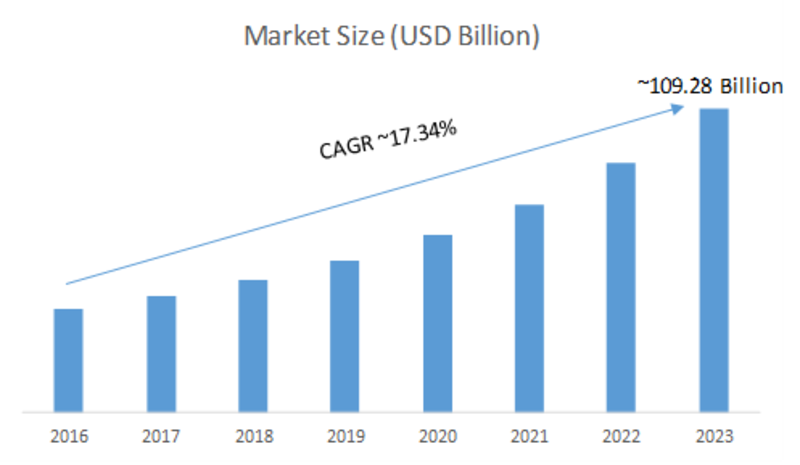 Smartwatch market is expected to reach USD 109.28 billion by the end of forecast period with 17.34% CAGR.

The smartwatch market is segmented on the basis of operating system and application.

Based on operating system, the market is segmented into iOS, Android, Tizen, Linux, and others.

On the basis of application, the market is segmented personal assistance & safety, health/wellness, media and entertainment, sports, communication, and others

By region, the market is segmented into North America, Europe, Asia-Pacific, and the rest of the world.

The global market for smartwatches is estimated to grow at a significant rate during the forecast period from 2018 to 2023. The geographical analysis of smartwatch market is done for North America, Europe, Asia-Pacific, and the rest of the world.

North America accounts for the largest market share owing to superior quality of life in the region due to high disposable income. Europe is considered as the second largest market for smartwatches as countries like Germany, France, Italy have high adoption of wearable technologies. Asia-Pacific is expected to be the fastest growing region owing to technology developments by regional players, such as Titan, entry of large global players, and increasing demand for high-end wearable devices. Also, increasing competition among key players like Apple Inc., Fossil Group, Samsung, and Lenovo Corporation among others to launch smartwatches with unique and advanced features is boosting the growth of this market in Asia-Pacific region.

The smartwatch market has witnessed a major trend of new product launch strategy across the region. Many key players have adopted new product development as their chief organic strategy to gain significant share in the market. The new product launch strategy is accounted for a significant percentage of the total market strategy in the years 2016 and 2017. Besides, partnership & collaboration strategy accounted for XX%; whereas, merger & acquisition accounted for XX% of the total strategy adopted by the key market players. Major players such as Samsung, Pebble, Maritime, and Sony are focusing on R&D investments to maximize their market share.

What is the projected market value of the global smartwatch market?

The global smartwatch market is expected to record a substantial market valuation of up to USD 109.28 billion by 2023.

What is the estimated growth rate of the global smartwatch market?

The global smartwatch market is projected to register a moderate 17.34% CAGR in the forecast period.

What is the operating system segment of the global smartwatch market expected to witness the highest growth?

The iOS segment is slated to expand as the fastest-growing segment.

A few major market players operating in the global smartwatch market are Apple Inc., Samsung, Fossil Group, and Lenovo Corporation among others

What are the features of smart watch?

tracking, alerts, and connectivity in smartwatches have garnered consumer interest in recent years