Please note that assessment period of report has been updated from 2018-2025 to 2020-2027. Cordially fill sample form for updated data. 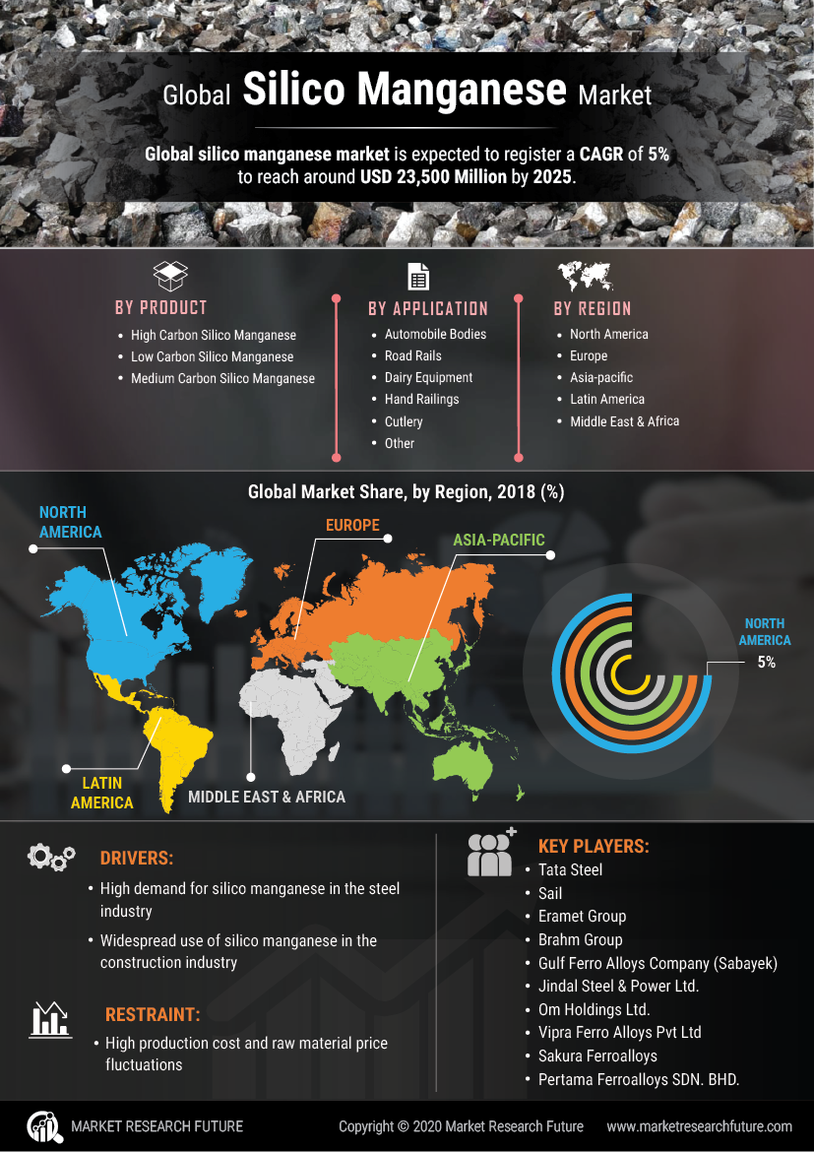 Global Silico Manganese Market is Expected to Register a CAGR of 5% to Reach Around USD 23,500 Million By 2025.

The Global Silico Manganese Market has been Segmented by Product, Application, and Region.

Based on application, the global market has segmented into road rails, automobile bodies, cutlery, dairy equipment, hand railings, and others. The automotive bodies segment accounted for the largest share of around 30% in 2018 due to the increasing demand for high strength products in the automotive industry and the increasing automotive production globally with over 100 million units manufactured in 2018. Furthermore, the automotive bodies segment is expected to be the fastest-growing segment amongst other applications with a CAGR of around 5.5% between 2019-2025. The segment is expected to reach a value of over 7,000 million by the end of 2025, owing to the growing end-use industries such as automotive and building & construction in emerging economies of Asia-Pacific, especially China and India. 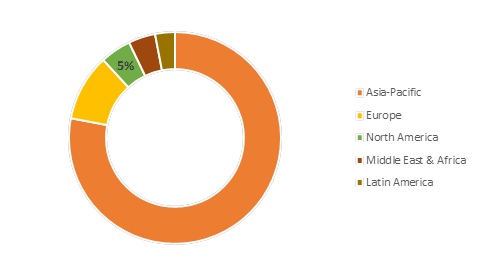 Based on region, the global Silico Manganese market has been divided into North America, Europe, Asia-Pacific, Latin America, and the Middle East & Africa.

The Asia-Pacific market accounted for the largest market share of around 80% in 2018 and is valued over USD 12,500 million in the global Silico Manganese market. Rapid industrialization, the growing construction sector and increasing steel production in China and India are expected to be the key driving factors for the market. According to the World Steel Association, in 2019 Asia produced 1,341.6 Mt of crude steel which was around 70% of the global steel production. The Asia-Pacific Silico Manganese market is expected to register the highest CAGR of over 5.5% throughout the forecast period.

Europe was the second-largest market with a share of around 10% in 2018 in the global Silico Manganese market owing to the growing construction activities in Eastern Europe due to the increasing number of single-family dwellings, growing formal lending to households, and low mortgage and interest rates. Furthermore, the growing automotive production and new car registration is likely to boost the growth of Silico Manganese market in the region over the forecast period. According to the German Association of the Automotive Industry (VDA), in 2017, the total number of cars registered in Western Europe was around 14.3 million units and 1.3 million units in Eastern Europe. The European market has registered a slow growth with a CAGR of around 3% between 2019 to 2025 and is expected to reach a value of around USD 2,000 million by the end of 2025.

North America accounts for around 5% of the global share and is expected to register a moderate CAGR of around 4%. The growth in the region is mainly attributed to the increase in residential construction and the increasing demand for steel from the automotive OEMs. The market in North America was valued at around USD 750 million in 2018 and is expected to reach around USD 1,000 million over the forecast period. The Silico Manganese market in Latin America and the Middle East & Africa is expected to witness significant growth over the forecast period.

The Global Silico Manganese Market is characterized by the presence of many global, regional, and local providers. The market is highly consolidated with all the players competing to gain maximum market share. Global steel production, fluctuating raw material prices, and growing end-use industries such as construction and automotive are the key factors that are expected to influence the global market growth. The vendors compete based on cost, product quality, availability, and reliability of the products. Vendors must provide cost-effective and high-quality products to compete in the market.

The high competition has encouraged the players to expand their production capacity and regional footprint. Moreover, manufacturers are also focusing on investing heavily in research and development activities to develop innovative products for diverse end-use applications. The players operating in the global Silico Manganese market are adopting various strategies such as mergers & acquisitions, alliances, joint ventures, and expansion to maintain their positions and increase geographic presence. Expansion of production capacity was the most widely employed growth strategy amongst many market players to capture maximum market share.

At what CAGR will the Global Silico Manganese Market grow in the future?

Global Silico Manganese Market will grow at a CAGR of 5% in the future.

By 2025, what will be the revenue generation by Global Silico Manganese Market?

What are the segments mentioned in the Global Silico Manganese Market?

The segments such as products and applications are mentioned in Global Silico Manganese Market.

Which region accounted for the largest market share in Global Silico Manganese Market?

The Asia-Pacific market accounted for the largest market share and is valued over USD 12,500 million in the global Silico Manganese market.