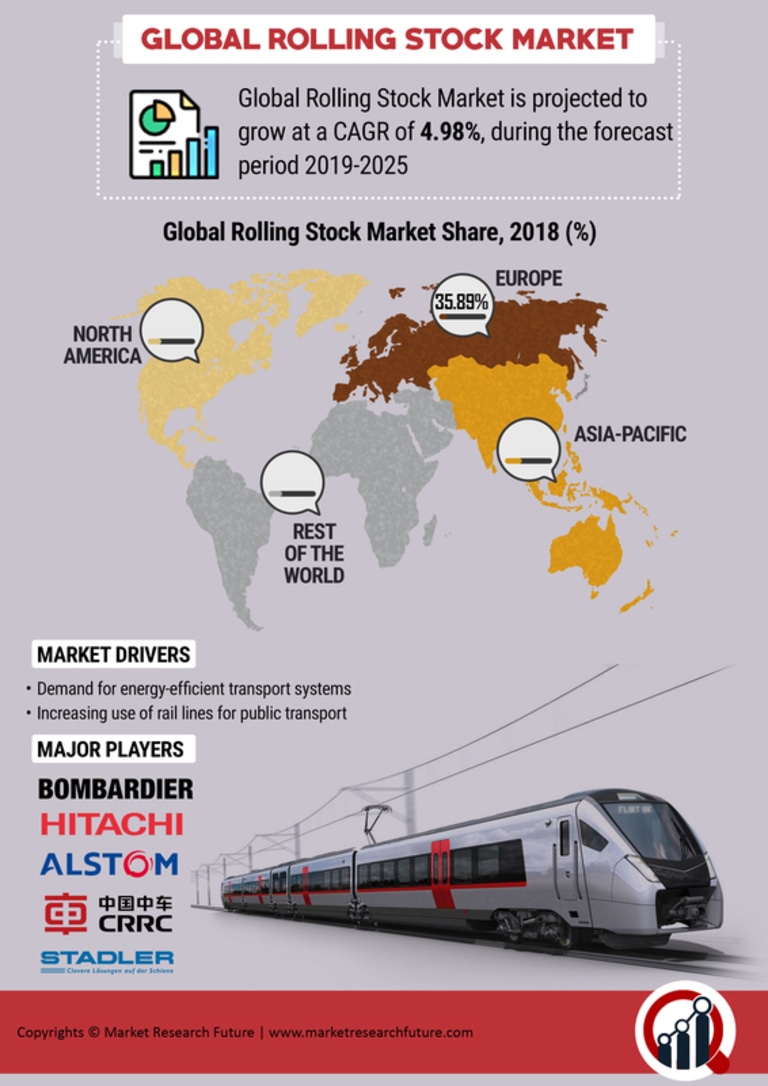 The Rolling Stock market is expected to grow at a CAGR of 4.9% over the next five years.

The rolling stock market size was valued at USD 41.10 in 2020 and is projected to reach USD 52.92 Billion by 2028, growing at a CAGR of 4.9% from 2021 to 2030. The rolling stock market has been experiencing a profitably good share in the global market that leads to a sustainable future. The unpowered and powered vehicles have been attaining high safety regarding infrastructure and reliability.

The major factors driving the Rolling Stock Market are the cost-efficient facilities provided by the industry and the market. The reliability of the facilitation and the transportation of the goods, along with convenient safety levels, has propelled the growing usage and consumption of the same by both consumers and retailers. The price put on by the passengers has risen extensively to manage a structural and management-based production. This makes the entire market run globally over the efficiency and productivity of the same. The forecasting rail transit visit has also ensured that amid the entire process of transport, the volume and structure of the products remain intact.

The impact of COVID-19 is observed differently in different markets. The outbreak of deadly virus forced the government around the world to impose nationwide lockdown which directly affected all kinds of markets. Only necessary services and workers were allowed. Even though transport and railroad services are important to maintain the flow around the world, the market was affected negatively. The one reason for the decrease in demand from the rolling stock market is the decreased budget allocated to railways by the government.

Major manufacturers of rolling stock markets such as Bombardier (US), announced the suspension of production due to a decrease in demand during the lockdown period. Many companies and major key players of the market are adapting to new strategies to cope up with the negative effect of the COVID-19 situation.


Drivers: The two major growth drivers of the market are:

Looking at the working of the rolling stock market, the market works on the budget given to it by the government, locals, and the profit it earns from the services. Currently, rolling stock is keeping a good eye on its rail lines as it is providing the maximum profit and is projected to expand further by 2025. The market is working on the expansion of the metro and electrical network. The services provided by rolling stock manufacturers to the world are the transportation of goods and passengers, connectivity, and services to commercial industries.

Bombardier Transportation launched its Traxx 3 platform into the market with the Kassel Site location in Germany. This enabled various capacities to be activated like the Last Mile Function, and it further enabled the non-electrified sections to aim at efficient energy production.

In May 2019, the Coradia iLint hydrogen German Public transportation system introduced the globe’s first passenger train powered and trained by hydrogen fuel cells along with proper sustainability. As a result, this ensured a hustle-free consumption of the non-electrified tracks. This launch helped ensure no particular harm to the performance base of the transport network.

What is the value of the rolling stock market by 2028?

The rolling stock market is projected to reach USD 52.92 Billion by 2028

What are major market trends of the rolling stock market contributing to its growth?

Who are the key players in the rolling stock market?

Which region is projected to be the global leader of the rolling stock market by 2028?

The highest heat growth in development is observed in the Middle- East- Africa region but the Asia-Pacific region is projected to be the global leader of the rolling stock market by 2028.

Rolling Stock Market is Estimated to Grow at a CAGR of 4.9% During Assessment Period