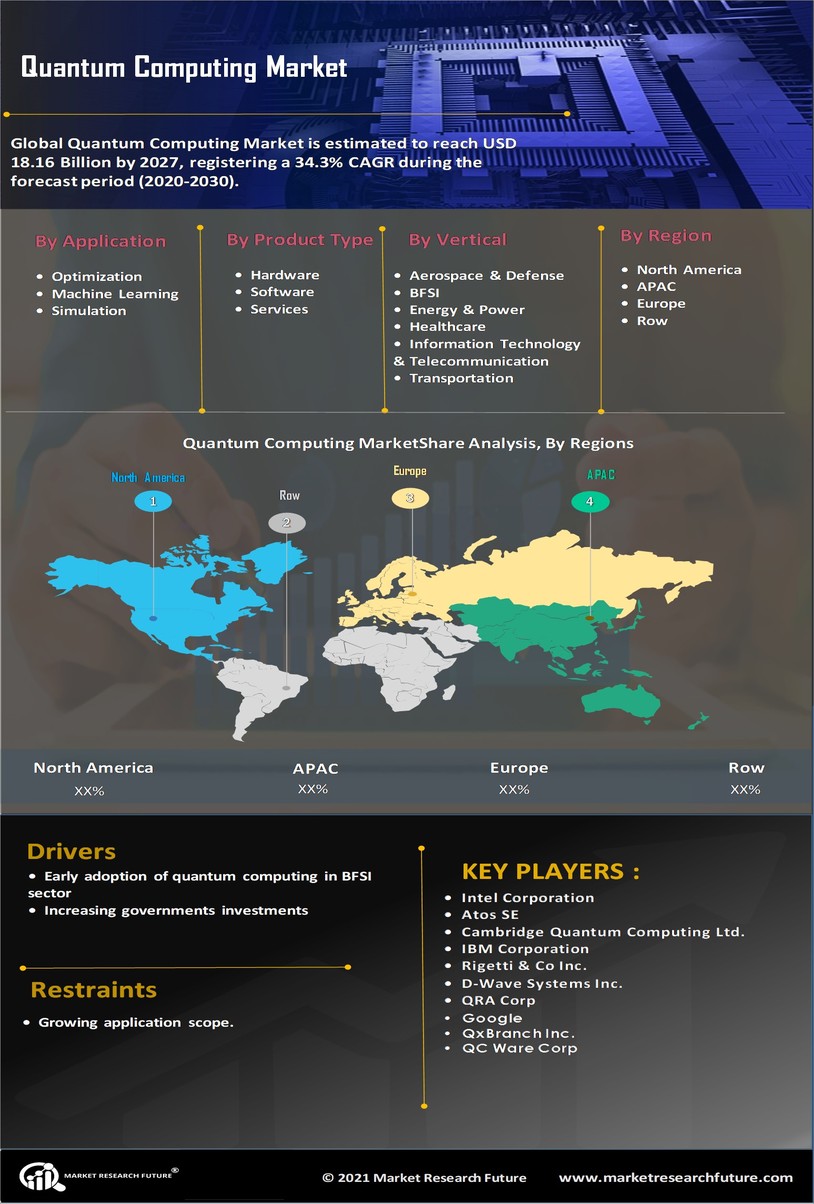 Quantum computing is emerging as an area of interest for quantum information science research. The technology has already started attracting R&D investments to achieve quantum supremacy. In 2019, Google officially announced that it achieved quantum supremacy.

The COVID-19 pandemic onset has aggressively accelerated digitization across the globe. The global economy is struggling to adapt to changes brought by the pandemic, and industries are trying to sustain their momentum in digital transformation, adapting to the new normal of implementing remote workstations. In such scenarios, quantum computing remains a major attribute of the solid research strengths.

Rising quantum computing market demand from sectors such as BFSI, defense, and automotive fosters the growth of the market. Moreover, the increasing rate of cybercrimes and stringent government initiatives for the development of quantum computing technology are major driving forces behind the market growth.

The growing adoption in the life sciences in the field of computer-aided drug design and silico modeling is also expected to provide major quantum computing market opportunities. Furthermore, the rising focus on researching and implementing cutting-edge use cases for quantum computing in pharmaceutical research and development, specifically molecular dynamics simulations, would boost the market growth exponentially.

The product type segment is sub-segmented into hardware, software, and services. Hardware accounts for the largest segment in the market. In 2017, the segment accounted for a 44.9% share of the market by product types. The hardware segment is likely to remain highly attractive, reaching a valuation of USD 1,180 million with a 32% CAGR during the assessment period.

The vertical segment is sub-segmented into aerospace & defense, BFSI, energy & power, healthcare, information technology (IT) & telecommunication, transportation, and others. Among these, the aerospace and defense vertical is the largest adopter of quantum computing technology.

In 2017, the segment reached a valuation of USD 118.04 million, which is projected to grow further at a 38.3% CAGR during the forecast period. Quantum computing technology finds widespread application in aerospace & defense sectors for space exploration verification, critical modeling, and aerodynamic performance simulation.

By region, the market is bifurcated into the Americas (US, Canada, Mexico, Rest-of-North America) and South America, Europe (the UK, Germany, France, Italy, and Rest-of-Europe), Asia Pacific (China, Japan, India, South Korea, and Rest-of-the-APAC), and Rest-of-the-World. Among these, North America accounts for the largest market share, followed by Europe and the APAC region, respectively.


North America leads the global quantum computing market and would continue to maintain its market position throughout the assessment period. Factors such as the presence of key technology providers such as IBM Corporation, Intel, Google, and several others and well-established technology development centers in the region act as key driving forces for the market.


Europe accounts for the second-largest share in the global quantum computing market. Substantial investments by market players, alongside the rising initiatives and funding by governments in various countries in this region, positively impact the growth of the quantum computing industry. Moreover, the presence of major players such as Cambridge Quantum Computing Ltd. influences the development of quantum technology in the region.

The quantum computing market appears extremely competitive due to the strong presence of well-established industry players. Global technology providers are increasingly facing fierce competition from each other and local firms, who have mastered industry regulations and suppliers. Therefore, eminent players seek opportunities to integrate across the extended value chain while focusing on the expansion of production facilities, R&D investments, and M&A activities to gain impetus.

January 21, 2021 – The University of Glasgow announced its partnership with Oxford Instruments NanoScience on Quantum Computing. The university is a pioneering institution in quantum technology development. Under the partnership, the Glasgow University would use Oxford Instruments' next-generation Cryofree refrigerator, Proteox, as part of its research to accelerate quantum computing commercialization in the UK.

January 21, 2021 – Atos, a global leader in digital transformation, announced that it welcomes the French government's initiative in developing the national strategy on quantum technologies. The national quantum strategy offers Atos the opportunity to accelerate its Quantum Learning Machine (Atos QLM) expertise to offer the French quantum ecosystem with the benefits of quantum computing in the NISQ (Noisy Intermediate-Scale Quantum) era as soon as possible.

January 21, 2021 – PlanQK (Platform and Ecosystem for Quantum-Assisted Artificial Intelligence), a major project in Germany, announced using quantum computing techniques to develop quantum AI algorithms. The project worth €19m is funded by the German Federal Ministry of the Economy.

January 19, 2021 – Amazon Web Services (AWS) announce that The Ministry of Electronics & Information Technology (MeitY) India has chosen its Bracket cloud-based quantum computing service to establish a Quantum Computing Applications Lab in the country. Quantum computing developments are at a very nascent stage in the country. The move would give researchers, and scientists access to Amazon's technology & services, whether in educational institutions, research labs or in the startup environment.

The analysis of COVID-19 impact on the quantum computing market revenue is also included in the report. Regional assessment in this report unlocks a plethora of untapped opportunities in regional and domestic markets. Detailed company profiling in the report enables users to evaluate company shares analysis, existing & emerging product lines, pricing strategies, innovation possibilities, the scope of the product in new markets, and much more.

What is the growth of the quantum computing market in terms of CAGR?

An extraordinary CAGR of 34.3% is predicted to motivate the market in the coming years.

What is the valuation of the quantum computing market by 2023?

A valuation of USD 18.16 billion is foreseen to achieved by the market in the coming period.

Which region is expected to spearhead the global growth of the quantum computing market?

The North American region is expected to spearhead the growth of the market on a global level.

What CAGR development can be expected from the North American region as the leader in the global quantum computing market?

A 34.3% CAGR is expected to motivate the market to the leading position in the forecast period.

Who are the participants in the quantum computing market?

What are the restraints present in the quantum computing market?

The issues related to implementation and operation are expected to slow down the growth in the coming period.

What are the drivers impelling the quantum computing market?

The escalated investment level being directed from the governments is expected to have a broad effect on the global market.