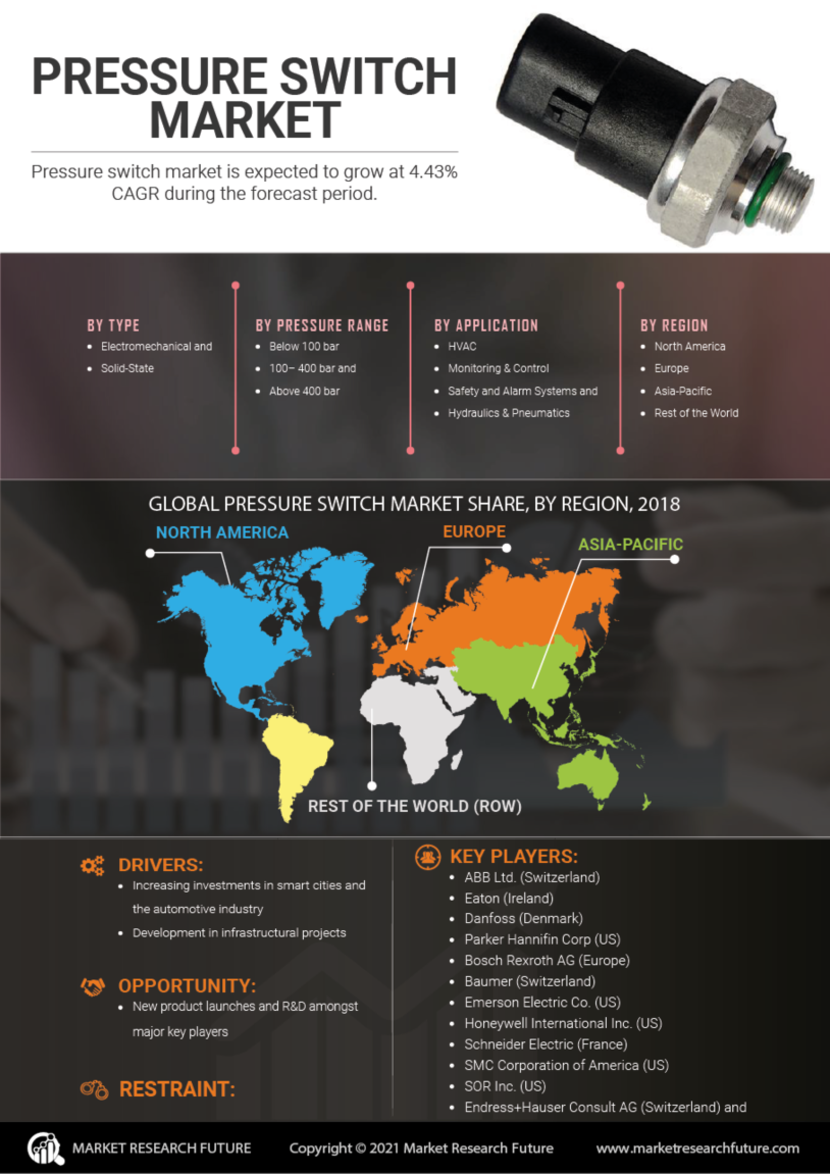 Pressure switch market is expected to grow at USD 2.09 Billion 4.71% CAGR during the forecast period.

The global pressure switch market is expected to witness substantial growth during the forecast period, as the systems are mainly based on renewable sources of energy. Geothermal plants also contribute to the global pressure switch market, with Europe accounting for the largest market share. Europe has over 100 geothermal stations installed, which produced about 15 TWh of electrical power in the year 2016. The installed capacity in 2016 was 2.5 GWe and is expected to reach 3 GWe by 2020. North America holds the second-largest share in the geothermal segment with over 77 installed plants and an installed capacity of 3,086 MW. The pressure switch is used in various applications including shipbuilding, hydraulics, railway, large engines, potentially hazardous areas, and water treatment. Hence, rising industrialization and rapid increase in investment for infrastructural projects drive the market growth.

Increasing investments in smart cities and the automotive industry and development in infrastructural projects increase the market growth. According to the German association of the automotive industry, there was an increase in 5.3% in sales of the automotive sector from the year 2016 to 2017. So, the rising demand for electric vehicles and increasing automobile production is driving the market of pressure switch in the automotive & transportation sector. The global pressure switch market is projected to grow at a high rate during the forecast period, mainly due to the increase in application in HVAC and hydraulics & pneumatic based applications. According to the Industrial Development Report 2018, governments around the world have encouraged industrialization by increasing the investments in industries, which further drives the growth of the global pressure switch market, globally.

The global pressure switch market has been segmented based on type, pressure range, application, end-user, and region. Based on type, the market is classified into electromechanical and solid-state. electromechanical segment is dominating the market share, mainly due to the less cost involved in setting up the system for both, commercial and residential use. Based on the application, the market is further segmented as off-grid and on-grid. The on-grid segment dominates the market in this sector as on-grid systems are very cost-effective, reliable and efficient. The global pressure switch market is further segmented based on end-user, including residential, industrial, and commercial segments. The commercial segment is estimated to register the highest growth rate during the forecast period.

The global pressure switch market is expected to grow at 4.43% CAGR during the forecast period. 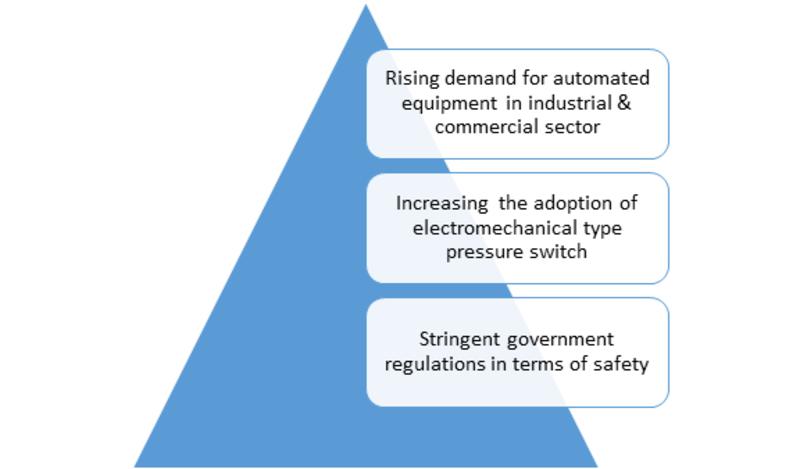 What is the projected market value of the global pressure switch market?

The global pressure switch market is expected to record a substantial market valuation due to the increasing demand for automated equipment in the commercial and industrial sector.

What is the estimated growth rate of the global pressure switch market?

The global pressure switch market is projected to register a moderate 4.43% CAGR in the forecast period.

What is the type segment of the global pressure switch market expected to witness the highest growth?

The electromechanical segment is slated to expand as the fastest-growing segment.

What is the end-user segment of the global pressure switch market expected to witness the highest growth?

Who are the key players operative in the global pressure switch market?

A few major market players operating in the global pressure switch market are Honeywell International Inc. (US), SMC Corporation of America (US), Schneider Electric (France), SOR Inc. (US), among others.

Pressure Switch Market Is Predicted To Grow At More Than 4.43% By 2027