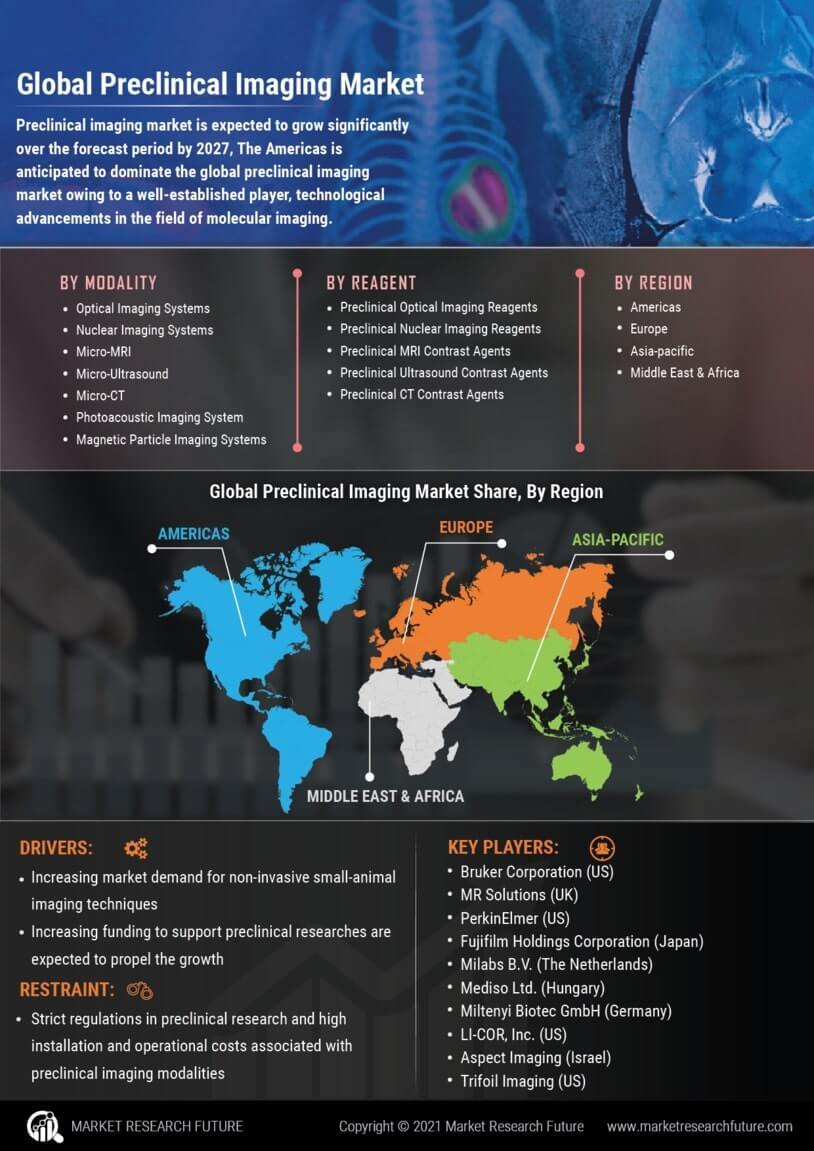 Preclinical Imaging Market is projected to register a CAGR of 3.2% and reach a value of USD 5.4 Billion.

The preclinical imaging market is expected to reach USD 5.4 billion by 2030 at 3.2% CAGR during the forecast period 2022-2030. The process refers to the vision of living animals for analysis reasons. For example, drug development and imaging modes are crucial for researchers. Other factors that impact market growth are increased funding to support preclinical research and growing market demand is also projected to influence the market's growth and push it forward. However, the high installation and operational costs and strict government regulations in preclinical research will impede the market's growth over the coming years. During the last few years, the market has gained a lot of growth and attributed the growth. The presence of well-established players and innovative technologies in the field of molecular imaging and also the rise in the funding will support the market in the forecast period.

The preclinical imaging market has been segmented into modality, reagent, and region.

The preclinical imaging market segmented, by region, into the Americas, Europe, Asia-Pacific, and the Middle East & Africa. The market in the Americas further segmented into North America and South America, with the North American market divided into the US and Canada.

Geographically, the Americas is anticipated to dominate the preclinical imaging market owing to a well-established player, technological advancements in the field of molecular imaging, increasing market demand for non-invasive small-animal imaging techniques, and increasing funding to support preclinical researches.

Europe is expected to hold the second largest position in the market. The market growth in this region is attributed to increasing funding to support preclinical researches.

The Middle East & Africa has the least share of the preclinical imaging market.

March 2022 – Veristat, to strengthen its relations in the European market, has announced the acquisition of Switzerland-based SFL (Solutions for Life Sciences) for an unrevealed price. A Southborough, Massachusetts-based CRO, Veristat, stated that the deal would offer access to an SFL team with deep experience encompassing a variety of therapies in orphan disease and oncology seeking further treatments, which could blend artificial intelligence, diagnostics, and devices. The company believes that the SFL's background in the EU, the U.K., and the Swiss healthcare systems signify profit for a U.S. company looking to get into those markets.

Market of Preclinical Imaging, by Modality


Market of Preclinical Imaging, by Reagent


Market of Preclinical Imaging, by Region

A global leader PerkinElmer is committed to innovating for a healthier world; it recently announced the expansion of its in vivo imaging portfolio with the launch of the Vega® imaging system. This first-of-its-kind ultrasound platform combines hands-free, automated technology with the high-throughput capability to accelerate non-invasive research and drug development studies of cancer, liver and kidney disease, cardiology, and more.

Researchers from York and Cambridge, U.K., have developed a new sodium magnetic resonance imaging (MRI) technique by doing the recent research on mice. It can detect levels of 23Na in breast tumours, which could help diagnose and monitor breast cancer. It is also useful to indicate the degree of aggressiveness of a tumour and its susceptibility to chemotherapy.

In Boston, a new study led by investigators at Massachusetts General Hospital (MGH) shows the impact of early amyloid-β and tau protein accumulation on disrupting connections between brain structures that are important for memory.Intended Audience

At what CAGR is the Preclinical Imaging Market projected to grow during the forecast period?

The Preclinical Imaging Market is projected to register exponentail CAGR between 2022-2030.

Which region is expected to spearhead the Preclinical Imaging Market?

The Americas are expected to spearhead the Preclinical Imaging Market.

Who are the key competitors in the Preclinical Imaging Market?

What are the different applications of Preclinical Imaging?

What are the strategies adopted by industry players to maintain dominance in the Preclinical Imaging Market?

Strategies adopted by industry players to maintain dominance in the Preclinical Imaging Market include product innovations and launches, partnerships, and mergers.