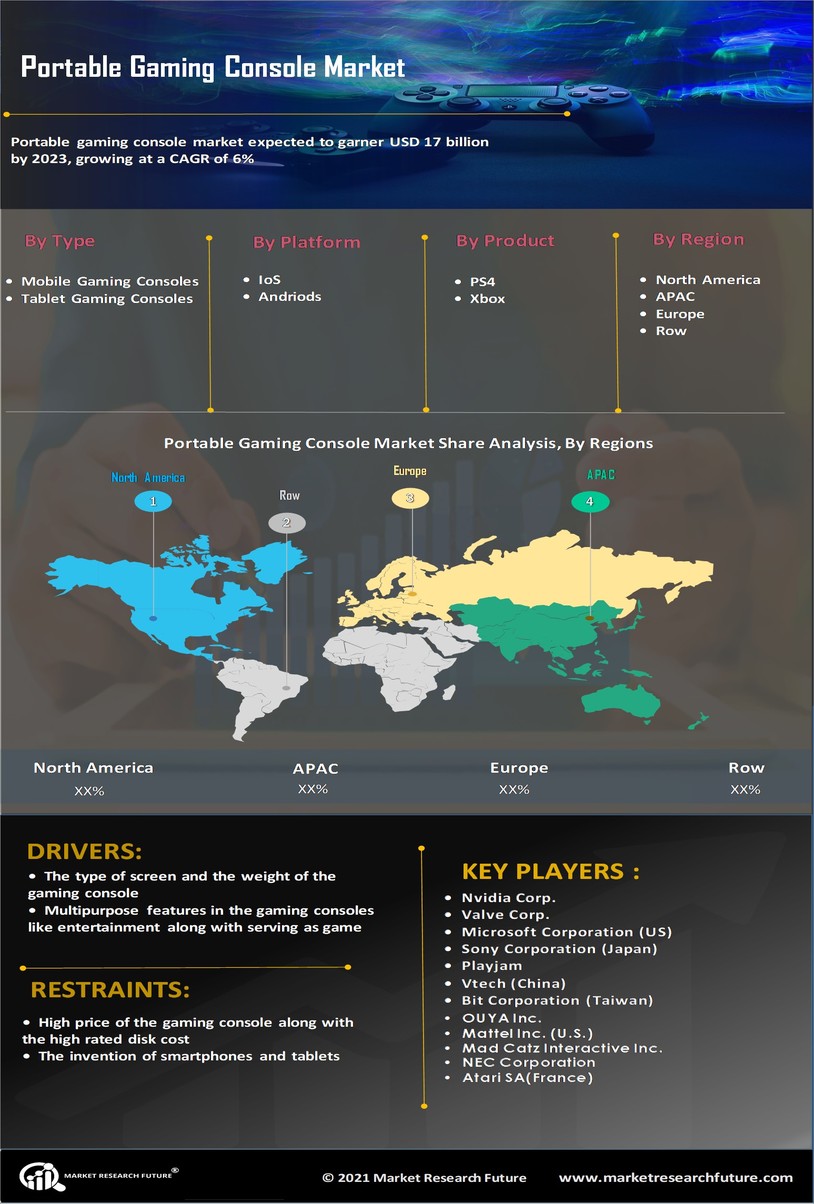 In the region of North America, the portable gaming console market is attending high attention worldwide. The portable gaming console market trend is due to the console being embedded with integrated circuits which protect the device from activities like battery clones or short circuits. The framework of the market has provided the stakeholders with a faster and efficient understanding of the market. The stereoscopic image has improved the in-depth illusion and has offered better 3D gaming in the marketing platform.

The breakdown of the pandemic of COVID 19, had a great impact globally. This has also brought a bad impact on the gaming console market business across the industries. Each sector of the business is facing such an issue. The rise in the pandemic has disrupted the supply chain in the industry and the constant lockdown put forward has risen the demand at the same time.

The type of screen and the weight of the gaming console are the driving factors of the market. The sensors in it offer real-time motion sensing which provides a gaming experience to the users.

global portable gaming console market is more attractive in the APAC region which increases the opportunities during the forecast period. Digitally the gaming consoles have made the market profitable.

trying to maintain a balance between the quality and price along with the incorporation of new advanced features in the portable gaming console is the major challenge for the market. Lessening the blockbuster owing to the high price of production of offers a great challenge. The migration of consumer trends to alternative platforms including online games and mobile games becomes a challenging factor.

The value supply chain management of the gaming market has accelerated the growth in building a strong network and constantly outsourcing peripheral activities. Due to the network, it has built a good relationship between the commercial partners. These chains are managed to create value to migrate to the links having better earning potential.

with the advancement of technology and with the innovation of new products several audiovisual consoles are in great demand. An increase in demand for high-end sound systems and displays gives improved and well-developed consoles to the consumers. Also due to the advancement of 3D technology the gaming consoles have been used by electronic consumers. With this, the technology has enabled us to securely download and play games on handled products.

In this portable gaming console market forecast period, the European region showed rapid portable gaming console market growth. Markets in Asia Pacific countries like China, Japan, South Korea are emerging at a high rate and are expected to attain a CAGR in the upcoming period. This region holds the shares in terms of market shipments and revenues thus contributing to the increase in gamers.

Portable gaming console market analysis examines the trends related to the growth, supply, recent developments, and rates. Factors affecting the drivers, restraints, challenges that provide the market scenario of the market.  The market report signifies the policies and regulations implemented in various regions. It also highlights the competitive landscape and has shown the attractiveness of the gaming console. These gaming console enhances the user’s experiences and brings reality to the home play. You will mark that the key players make it easy to navigate through market-related changes. It also covers the segmentation of the market by type, by technology, regionally, and geographically.