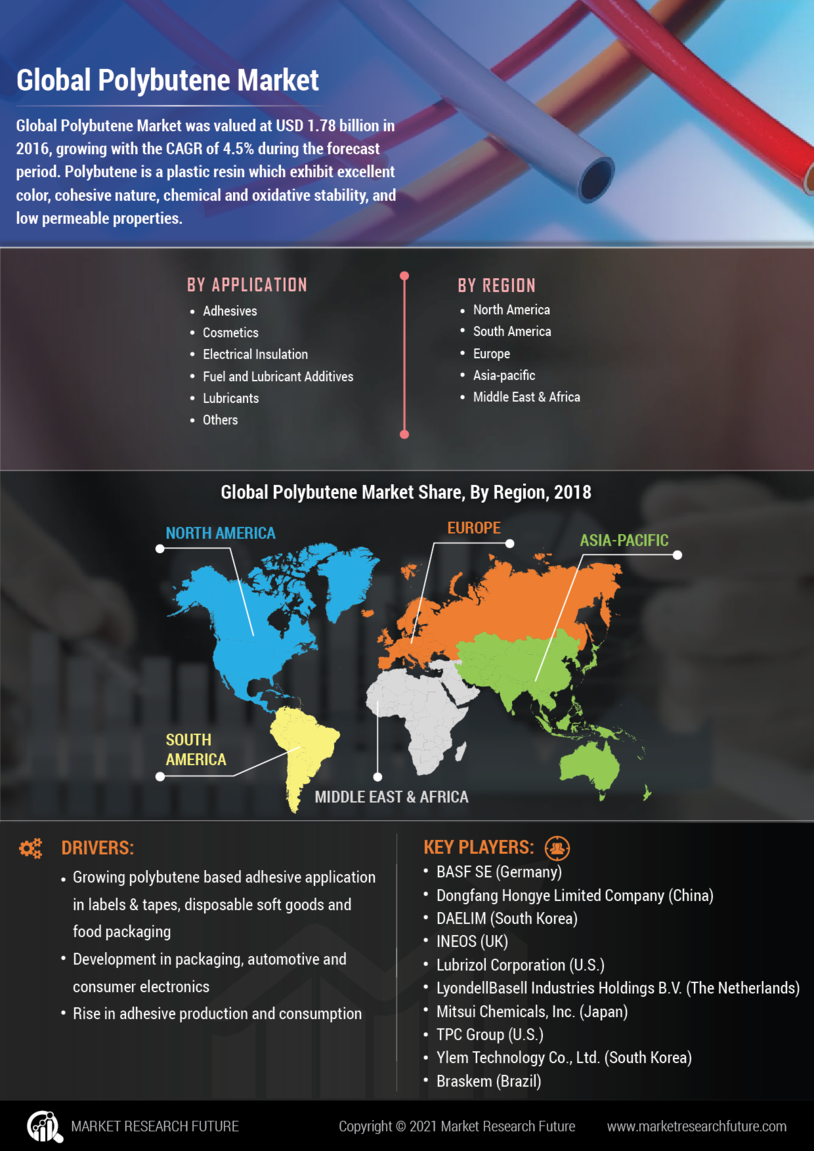 Polybutene Market was valued at USD 1.78 billion in 2016, growing with the CAGR of 4.5% during the forecast period. Polybutene is a plastic resin that exhibits excellent color, chemical and oxidative stability, cohesive nature, and low permeable properties, and it has been mainly used as modifiers and extenders in butyl rubbers. It also helps in reducing tensile strength and heat distortion temperature, and the superior properties of polybutene make it an ideal application for flexible automotive components such as gaskets, mudguards, wire jacketing, and airbag door covers.

The polybutene market has been segmented on the basis of application and region. Based on application, the polybutene market has been segregated into automotive, adhesive, electrical insulation, fuel and lubricant additives, cosmetics and personal care and other. Adhesive based polybutene has been dominating the market, it maintains high flexibility at low temperatures. As an adhesive its chief application are binding and packing majorly used in diapers and feminine products.

Growing polybutene based adhesive application in labels & tapes, disposable soft goods and food packaging is expected to drive the market demand. According to market research future report global adhesive tape market is expected to be around USD 62 billion by 2022. Development in packaging, automotive and consumer electronics have offered growth potential for adhesive market. In addition, according to China Adhesives and Tapes Industry Association, China adhesive production in 2014 was 6.59 million tons which has increased by 6.1% from 2013. Thus, rise in adhesive production and consumption is projected to propel polybutene market demand.

Increasing application of polybutene as an electrical insulation in several electronic products is projected to fuel market demand. Government initiative to strengthen economic growth in developing nations such as India, China, Africa, along with population growth and improving standard of living, is favoring global polybutene market. For instance, Electronic Industries Association of India has reported that Indian consumer electronic application production was worth USD 7,836 million in 2016 which has increased to USD 9,090 million in 2017. Thus, shift in consumers lifestyle towards smart lives has surged the demand for convenience electronic goods which has been positively influencing the polybutene application. 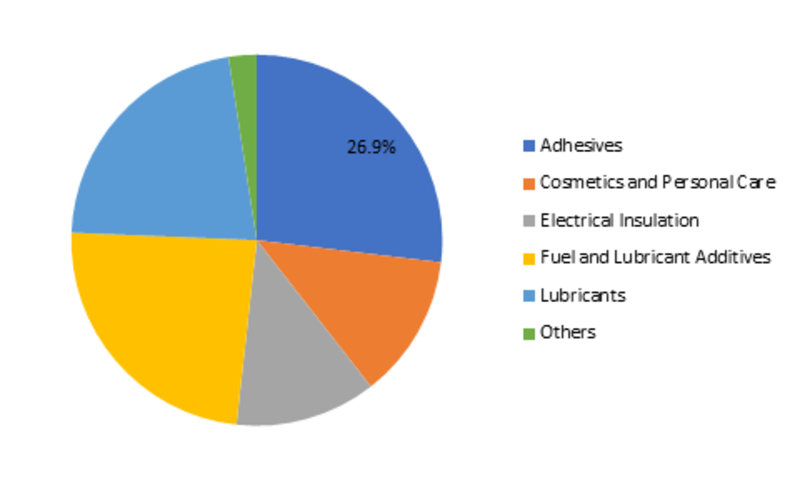 In North America market demand is positively impacted by growing application of polybutene in cosmetic & personal care products. Evolving consumers grooming habitat have increased the usage of cosmetic and skin care products in recent years. Further, increasing skin diseases across the globe has triggered the global consumption of skin care products. For instance, it is estimated that around 9,500 people are diagnosed by skin cancer in U.S. every day according to American Academy of Dermatology. Middle East & Africa and Latin America is expected to witness steady growth during the assessment period owing to rising application of polybutene in fuel and lubricants additive.Recent Development

Some of the important players in the polybutene market are BASF SE (Germany), DAELIM (South Korea), INEOS (UK), Dongfang Hongye Limited Company (China), Lubrizol Corporation (USA), and others. An increase in polybutene-based adhesive application in labels and tapes, disposable soft goods, and food packing is expected to take forward the market demand and according to a market research future report global adhesive tape, market is projected to be around USD 62 billion by 2022. Development in automotive and consumer electronics has offered growth potential for the adhesive market, and according to the China adhesives and tapes industry association, China's adhesive production in 2014 was 6.59 million tons which has increased by 6.1% from 2013. Hence, an increase in adhesive production and consumption is expected to propel polybutene market demand. The production of polybutene was worth USD 7,836 million in2016, increasing to 9,090 million in 2017.

At what CAGR is the Polybutene Market predicted to grow during the forecast period?

What is the forecast period of Polybutene Market research report?

The forecast period for Polybutene Market research report is 2020-2027.

Who are the key players in the Polybutene Market?

Which region will lead the global Polybutene Market?