Please note that the assessment period of the report has been updated from 2018-2025 to 2020-2027. Cordially fill Sample form for the updated data. 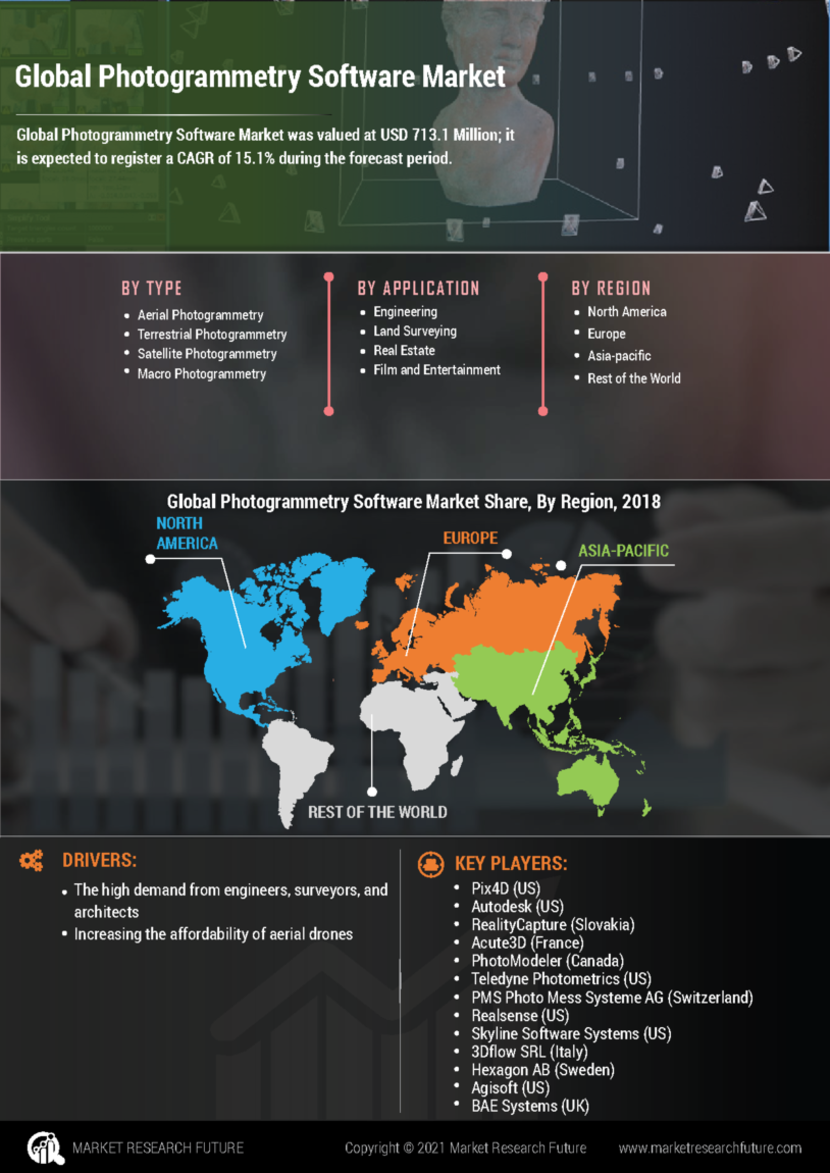 Global Photogrammetry Software Market was valued at USD 713.1 Million; it is expected to register a CAGR of 15.1% during the forecast period.

Photogrammetry has been used since the 1940s, however, currently, the software and platforms have been upgraded owing to advances in technology. Drones capture the pictures and aerial photos; these devices can fly low enough to catch minor details such as cracks in the sidewalks or survey markers. The photogrammetry software then combines multiple photos of an area together to make one large image called an orthomosaic. The data is also used to generate a point cloud or a 3D model. The software is used to create an accurate orthomosaic as it takes all the photos and compares the pixels in each one. Then, it matches the colors and together and joins them similar to that of a puzzle. The software enables the users to minutely observe the images of infrastructure or other objects such as pavements, buildings, and roads. Additionally, the data from the GPS navigation tool of the drone helps the software to identify the exact location of any object.

The Global Photogrammetry Software Market has been segmented based on Type, Application, and Region/Country.

By Application, the global photogrammetry software market has been divided into engineering, land surveying and real estate, film and entertainment, and others.

The Global Photogrammetry Software Market is expected to register a CAGR of 15.1% during the forecast period. The geographic analysis of the global photogrammetry software market has been done for North America, Europe, Asia-Pacific, the Middle East & Africa, and South America.

North America has the largest share in this photogrammetry software market as the vendors in this region are investing significantly in R&D activities, which has led to advancements of technologies in land surveying and other geospatial activities such as geo-capturing, geo-modeling, geo-imaging, and geo-referencing. The US leads the market in North America owing to the high digitalization rate and the extensive use of photogrammetry software mainly for applications such as topographic mapping, architecture, and engineering.

The growing applications of photogrammetry software have led to increased competition among the vendors in the market. Major players have opted for partnerships and new product development as their key organic growth strategies to enhance their positions in the market and cater to the demands of farmers and agriculturists. For instance, in November 2019, Esri, a leading player in mapping and location intelligence, partnered with Salesforce which will now integrate Esri’s ArcGIS Living Atlas, the collection of global geographic data and base maps.  Salesforce Maps users will be able to access Esri’s ArcGIS Online, which will help businesses to analyze geographic and demographic data. In December 2018, Autodesk, Inc. acquired PlanGrid, a leading provider of construction productivity software. Autodesk and PlanGrid have developed complementary construction software named Autodesk's BIM 360; it acts as a platform to connect the stakeholders, data, and workflows on construction projects by supporting informed decision-making throughout the project lifecycle. PlanGrid software lets general contractors, subcontractors, and owners in commercial, heavy civil and other industries to benefit from real-time access to project plans, punch lists, project tasks, progress photos, daily field reports, submittals, and more. In October 2018, Trimble Inc. launched a new version of its Inpho office software suite for photogrammetry. The software includes MATCH-3DX software for the creation of high-quality 3D point clouds and orthomosaics.

The Key Players in the Global Photogrammetry Software Market are identified based on their country of origin, presence across different regions, recent key developments, product diversification, and industry expertise. These include Pix4D (US), Autodesk (US), RealityCapture (Slovakia), Acute3D (France), PhotoModeler (Canada), Teledyne Photometrics (US), PMS Photo Mess Systeme AG (Switzerland), Realsense (US), Skyline Software Systems (US), 3Dflow SRL (Italy), Hexagon AB (Sweden), Agisoft (US), BAE Systems (UK), and Trimble Inc. (US). The key strategies adopted by most of the players are partnerships, agreements, and collaborations.

What is the historic market value of the global photogrammetry s/w market?

The global photogrammetry s/w market is expected to record a substantial market valuation of 713.1 million by 2025.

What is the estimated growth rate of the global photogrammetry software market?

The global photogrammetry software market is projected to register a moderate 15.1% CAGR in the forecast period.

What is the type segment of the global photogrammetry s/w market expected to witness the highest growth?

The satellite photogrammetry s/w segment is slated to expand as the fastest-growing segment.

What is the application segment of the global photogrammetry software market expected to witness the highest growth?

The land surveying and real estate segment is slated to expand as the fastest-growing segment.

Who are the key players operative in the global photogrammetry market?