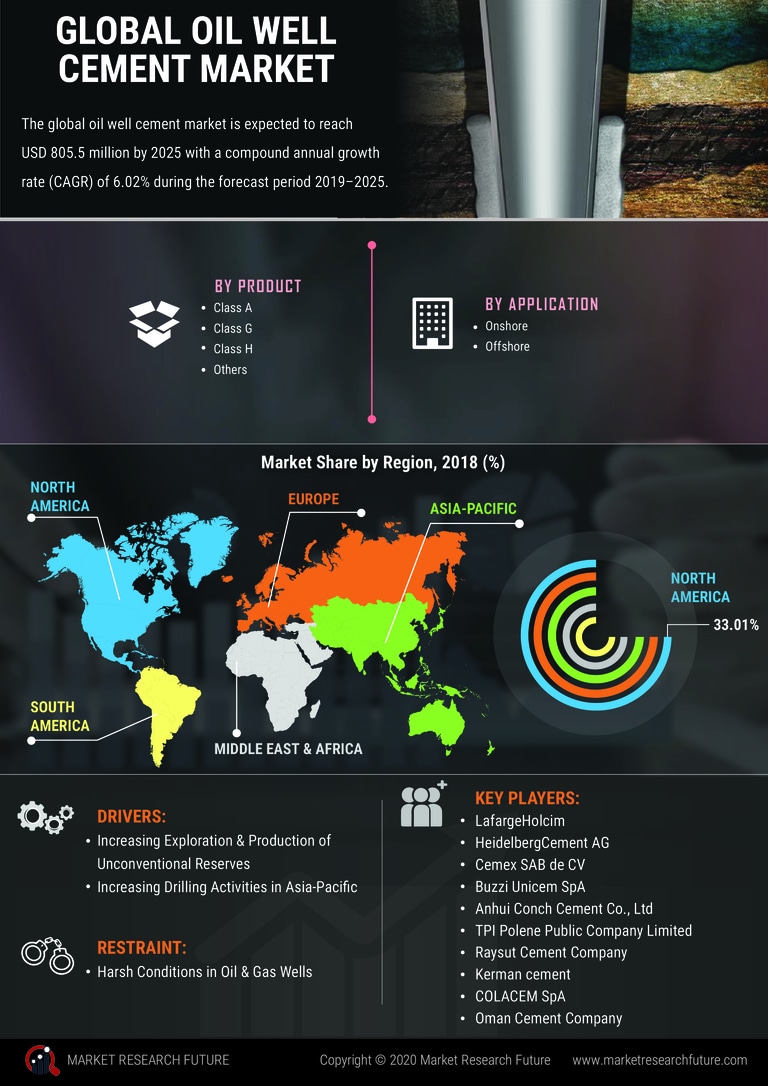 The factors driving the demand for oil well cement is the growing exploration & production (E&P) of unconventional reserves and the increasing drilling activities in Asia-Pacific in oil well cement market. The increasing global energy demand is leading to the depletion of conventional oil and gas reserves, resulting in the focus on E&P of shale oil and other unconventional resources. As per the US Energy Information Administration (EIA), global natural gas production from shale resources accounted for 42 billion cubic feet per day (Bcf/d) in 2015 and is expected to reach 168 Bcf/d by 2040. Moreover, shale gas production is expected to hold nearly 30% of the world’s total natural gas production share by 2040. For the various countries planning emission reduction, the use of shale fuel is an opportunity to ensure energy security while reducing dependence on conventional fuels. Several key countries are considering increasing investments in E&P for natural gas from shale resources to support the export requirement to bridge the demand and supply gap of electricity. For instance, countries such as the US, Canada, China, Argentina, Mexico, and Algeria are projected to account for 70% out of the global shale production by 2040. In the US, oil and gas companies aim to increase shale production from 37 Bcf/d in 2015 to 79 Bcf/d by the year 2040. Thus, the growing shale production, especially in Argentina, China, and Mexico, is expected to increase the demand for oil well cement, which is used for cementing offshore and onshore wells during hydraulic fracturing and horizontal drilling activities. The E&P of unconventional reserves of tight and shale gas are expected to create the need for oil well cementing. Therefore, the growing E&P of unconventional reserves is expected to drive the growth of the global oil well cement market during the forecast period.

Furthermore, as per the report mentioned above, the use of natural gas for electricity generation in Asia-Pacific grew from 1,442.1 Terawatt-hour (TWh) in 2017 to 1,485.8 TWh in 2018. The production of oil and gas is expected to increase during the forecast period to meet the energy demand in the region. The increase in the production of oil and gas due to the high demand has led to a rise in drilling activities in Asia-Pacific. Many oil and gas companies such as Saudi Aramco (Saudi Arabia) and Halliburton (US) focus on oil and gas E&P, which adds to the drilling in Asia-Pacific. For instance, in February 2019, Jadestone Energy Inc (Singapore) signed a rig contract for infill drilling on the stag oilfield at offshore Australia. According to the India Brand Equity Foundation (IBEF), in India, the growing oil & gas industry is expected to attract investments for E&P worth approximately USD 25 Billion by 2022. Additionally, according to the World Oil Magazine published in March 2019, China’s oil-producing companies, namely, PetroChina, Sinopec, and China National Offshore Oil Corp. (CNOOC) planned to invest USD 77 billion to boost the drilling activities in the existing oil fields. Such developments are expected to increase in demand for oil well cement used for cementing work during drilling. Furthermore, as per the October 2019 data of Baker Hughes, a GE Company (US), the rig count in Asia-Pacific increased from 2410 rig counts in 2017 to 2628 rig counts in 2018, leading to an increase in the need for oil well cement in drilling activities. Therefore, the increasing drilling activities in Asia-Pacific is expected to drive the growth of the global oil well cement market during the forecast period.

Geographically, the global oil well cement market has been segmented into five major regions, namely North America, Europe, Asia-Pacific, South America, and the Middle East & Africa. North America is expected to hold the major market share during the forecast period, owing to the increasing per capita energy consumption, E&P of oil and gas and technological advancement in oil well-cementing drive the growth of the market. According to the BP Statistical Review of World Energy report, 2019, the primary energy consumption per capita of North America increased to 239.8 GJ/Capita in 2018 from 235.3 Gigajoules per capita (GJ/Capita) in 2017, registering a growth of 1.9%. Additionally, the oil production in the region increased to 22.59 million BPD in 2018 from 20.16 million barrels per day (BPD), registering a growth of 12.1%. Moreover, according to the U.S. Energy Information Administration (EIA), in 2018, approximately 6.44 million BPD of crude oil were produced from tight oil resources in the US. The increase in E&P of oil and gas is expected to drive the growth of the market in North America.

The report for the global oil-well cement market of Market Research Future research covers extensive primary research. This is accompanied by a detailed analysis of qualitative and quantitative aspects by various industry experts and key opinion leaders to gain deeper insights into the market and industry performance. The report gives a clear picture of the current market scenario, which includes the historic and forecasted market size, in terms of value and volume, technological advancement, macroeconomic, and governing factors of the market. The report provides comprehensive information about the strategies of the top companies in the industry, along with a broad study of the different market segments and regions.

The market growth rate in the years ahead can be 6.02%.

What is expected to be the market value by 2027?

The global market for oil well cement can note substantial growth by 2027.

The strength of the oil well cement is dependent on what factors?

The strength of the oil well cement is dependent on the slurry design as well as the use of additives.

What are the chief factors inducing market growth in APAC?

Surge in the number of drilling activities, and rising focus on oil and gas among leading players induce market growth in APAC.

What are the primary applications covered in the report?

The primary applications covered in the report are onshore and offshore.

Which region can seize the largest share in the market?

North America can seize the largest share in the market during the review period.