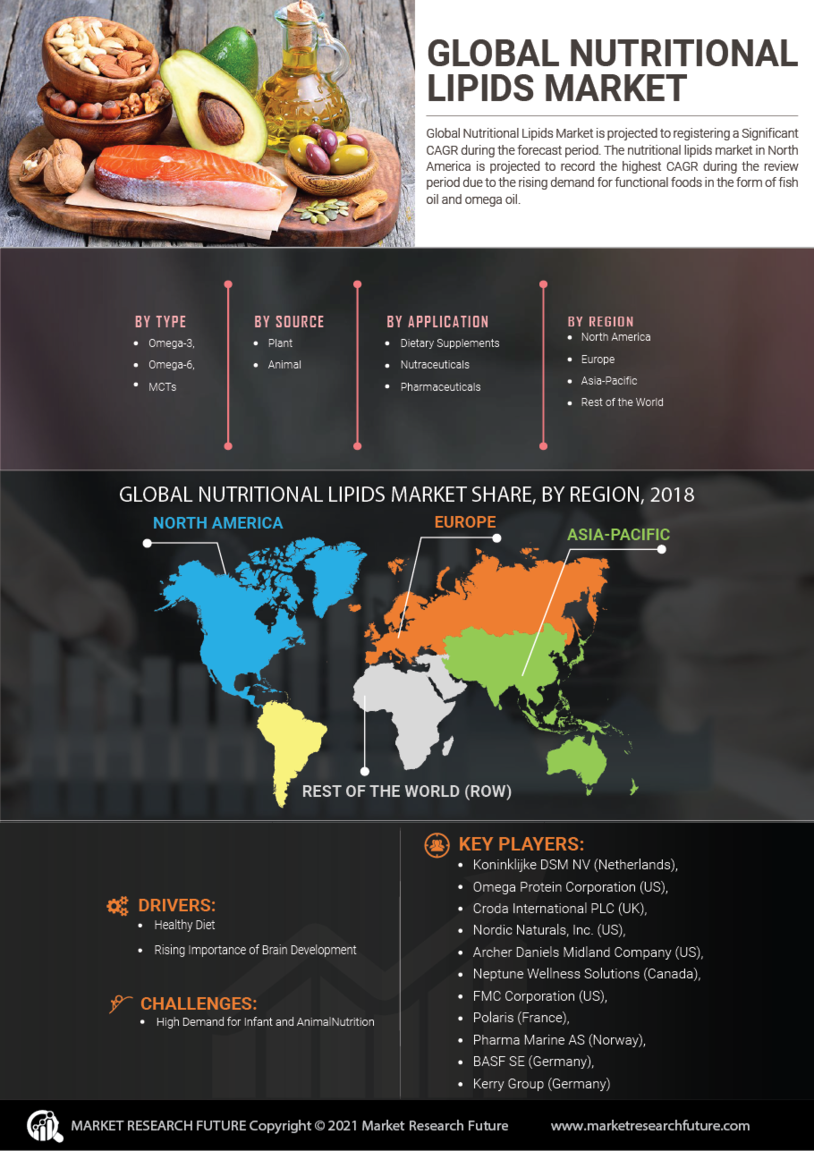 Nutritional lipids market size is anticipated to reach USD 10.98 billion by 2030, registering a CAGR of 6.89% during 2022-2030. Lipid is in great demand as it is used in foods, in some kind of being stages, in pharma-based products, and many more. These nutrients are in high demand among the population. The rise in growth and demand for nutritional supplements has helped in rising the market size. During the nutritional lipid market forecast period, certain calories are high enough. This nutrient-rich lipid has helped in reducing inflammation and has helped to stabilize the heartbeat. Lipids are the major component of organelles and certain organelles.

The outbreak of COVID posed awareness as well as increased the necessity of immunity among the population which has helped them in safeguarding from getting infected from the virus.it had led to accelerating the sale of the nutritional lipid market. After recovering from COVID, the consumption of nutrients on the patients has increased. It led to disruption in the supply chain and hampered consumer behavior. The outbreak of the pandemic had led to the shutdown of certain production units thus hampering the manufacturing of the nutritional lipids.

Opportunities- arise in diseases regarding cardiovascular disease and gain in obesity in the regions of North America along with the rise in awareness about the health issues of the consumers consuming lipid has raised the opportunity for the development of the market. Health benefits associated with it like inflammation, stability of heartbeat, and decrease in low-density lipoproteins. These are the factors that help in providing opportunities for gaining nutritional benefits. These are used for managing the deficiency of the nutritional benefits and are incapable of producing omega-3 and omega-6 fatty acids. The nutritional lipids played an important role in the functioning of the eye, brain, and mood.

Challenges- the costs of the nutritional lipid are very high and thus tend again in the price of the raw materials. These are the challenging factors imposed on the market. Some people are very much unaware of the healthy fats that will hamper the body's functions. This poses a great challenging factor for growth.

Restraints- finite and significant supply of fish oil and application of certain regulatory policies has helped in restraining the development of the market. Some of the issues associated with fisheries deteriorated the production of fish oil. I

By type- globally and regionally, the market has been divided based on the application where it is further classified into dietary supplements, pharma product feeds of animals, instant formula, and food and beverages. Based on product, the lipid market is being segmented into omega 3 and Omega 6, MCT, and many more. Based on source, the market is being classified into plant sources and animal sources. Based on form, the lipid industry is divided into solid and liquid. The division of the segment trendy impacts the rising nutritional lipid market growth. Globally the market has been expanded into various regions like North America, some of the European regions, Asia Pacific, and some the regions in the rest of the world. The regions of Asia Pacific include some areas of China, India, some of the Japanese region, New Zealand and Australia. The regions in the rest of the world include some African, South American, and Middle East regions. The market has been classified into dietary supplements and some of the nutraceutical segments. This segment has gained popularity due to the rise in health concerns and by adopting nutritional lipid market trends and nutritional lipid market outlook. As per the source, the plant division projects at a high rate which includes yoga centers, gyms, and many others which have been common among young people. Animal sources dominate the market as they lead to the production of significant omega 3 nutritional lipids.

By technology- some of the technological advancement so implemented as microencapsulation has helped in spurring up the nutritional lipid market size. Technology led to the emergence of certain prominent raw materials has raised the opportunity for market growth and its development. Some of the scientific and new technological innovations have been imposed for manufacturing lipids. Omega oil has been widely used for cognitive development which has helped in boosting up the expansion of nutritional lipid market size and nutritional lipid market growth. Certain key players by the help of technology manufacturers in-house R and D centers for carrying out certain research and developmental activities. Technology led to the introduction of certain products of enhanced functionality. Technology has helped in protecting various nutrients present in food by covering them in a shell. Technology has helped in providing smooth processing and packaging because of its ability to change the liquid into powder form.

Globally, and regionally the region of Asia Pacific is expected to occupy the most dominant region because of the growth in women's nutrition along with infant nutrition. The rising demand for lipids makes consumers aware of adding more nutrition for preventing certain diseases and improving certain physical and mental states. The region of China is found to be the largest and dominant consumer of nutritional lipids during the major nutritional lipid market forecast period due to the increase in demand for both infant and animal nutrition. The North American region is found to be the largest region covering a huge area and covers high CAGR during the assessment period. It is due to the rising demand for fish and Omega oil during the assessment period.

Some of the market players spread throughout the world include Koninklijke DSM NV of Netherlands, Royal FrieslandCampina NV of Netherlands, Omega Protein Corporation of the United States, Kerry Group of Germany region, Cross International PLC of the United Kingdom, BASF SE of Germany, Nordic Naturals Inc. of the United States, Pharma Marine SA of Norway, Archer Finland Daniel Company of the United States, FMC Corporation of the United States, Polaris of France, Neptune Wellness Solutions of Canada, and many more. Developing partnership, acquisition, and adopting different strategic techniques have helped in the launching of new products which promotes a competitive advantage. The report related to the competitive landscape gives a comprehensive analysis of the core competencies. From the secondary research activities, the nutritional lipid market share in the specific region has been identified by the market players. They identify and collect useful information for certain market-oriented technical and commercial studies about the market.

From a comprehensive research nutritional lipid market analysis it was found that the report covers a piece of wide information about the impact analysis of the market dynamics, its driving, and challenging factors. The report signifies the industrial growth taking place in the market. From the nutrition lipid market analysis it was marked about various segmentation done where the market is being projected at a great rate thus occupying a great market size. It gives a detailed study about factors influencing the market growth where it helps in denoting the market volume and its value. It gives a good analysis of the opportunities posing great ideas about the competitive landscape.

Which region is expected to dominate the nutritional lipids industry?

The Asia Pacific is expected to dominate the nutritional lipids industry.

Who are the key players in global nutritional lipids market?

What will be the value of the nutritional lipids industry during the forecast period?

Nutritional lipids industry is predicted to touch USD 10.98 billion by 2030.

What are the rising factors affecting the driving factors of the market?

Rise and growth in pharma and dietary supplement are some of the factors that have helped me drive up the nutritional lipid market growth. Due to high growth in urbanization, living sedentary lifestyles, along with rising consumption of unhealthy food has affected lifestyle-related health disorders. This led to the escalation of demand for nutritional lipids thus awarding health consciousness among the individuals. Intake of phospholipids is in great demand where it helps in the absorption of fats along with fat-soluble nutrients. These lipids are the important dense energy nutrients for maintaining a balanced feed ratio.

Nutritional Lipids Market is Boosted due to Increasing Awareness of the Importance of Brain Healt...