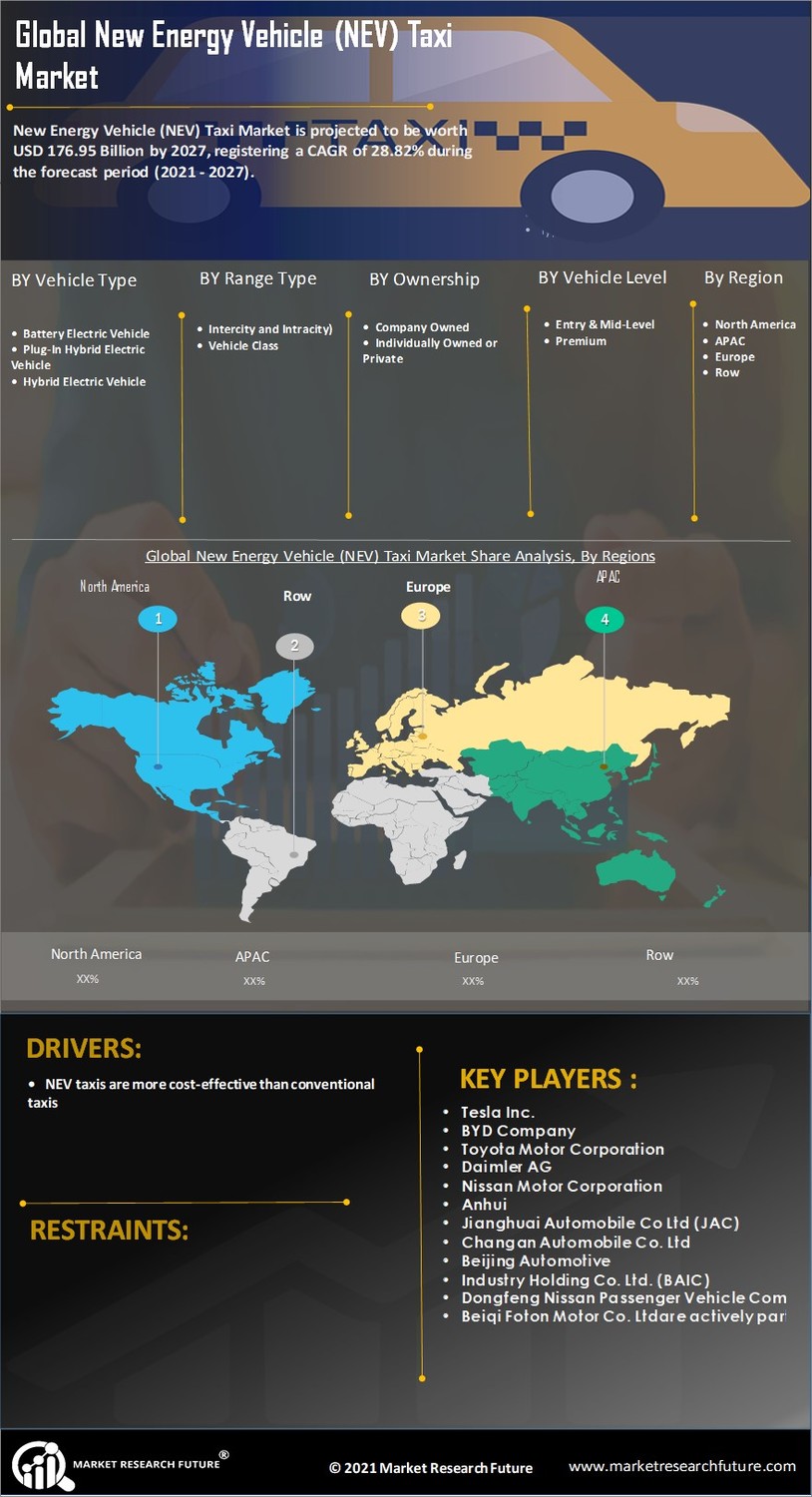 New Energy Vehicle (NEV) Taxi Market is projected to be worth USD 176.95 Billion by 2027, registering a CAGR of 28.82% during the forecast period (2022 - 2030).New Energy Vehicle (NEV) taxis are electric taxis, which are partially or fully powered by electricity. Due to the factors such as less pollution and cost-effectiveness, these NEV taxis are gaining popularity as the best alternative to conventional taxis.Furthermore, many governments are taking steps to increase the use of unconventional energy sources of fuel for the mobility and transportation of the people.

The major factors driving the growth of the global new energy vehicle (NEV) taxi market are the rising level of pollution and fuel prices.NEV taxis are more cost-effective than conventional taxis. Furthermore, the growing number of charging stations and stringent regulations of governments to cut down the carbon emission are expected to propel the growth of the NEV taxi market.Road transportation is one of the key sources of greenhouse effects and rising temperatures around the world.Vehicles such as BEV, HEV, and PHEV are gaining traction in recent years due to their proven benefits to reduce carbon emissions.Environmental regulations in developed and developing countries are focused on lowering individual vehicle emissions.However, factors such as the high price of electric vehicles, lack of charging infrastructure in developing countries restrain the growth of the NEV taxi market. The increase in popularity and adoption of electric vehicles and various incentive programs are creating opportunities for the market's growth in future years.

BYD, a China based EV manufacturer, has decided to open a new branch in ITT Hub, Pakistan to expand its influence in the South Asia market.

The global new energy vehicle (NEV) taxi markethas been segmented based onvehicle type, range type, vehicle class, ownership type, vehicle level, and region. Based on vehicle type, the global new energy vehicle (NEV) taxi market is divided intoplug-in hybrid electric vehicle, battery electric vehicle, and hybrid electric vehicle. The hybrid electric vehicle segment is likely to hold the largestshare of the market.The hybrid electric vehicle segment is projected to grow at thefastestrate during the forecast perioddue to better fuel efficiency, more power, and reduced emissions.Based on range type, the global market is divided intointercity and intracity.These are also called long run and short run. The intracity segment is expected to hold the largest share of the market share and it is expected to grow at the fastest rate during the forecast period. It is due to the rising usage of intracity NEV taxis in urban cities. Based onvehicle class, thenew energy vehicle (NEV) taxi market is segmented into hatchback, sedan, and utility vehicles. The hatchbacksegment is expected to lead the market during the forecast period owing to the demand surge for cost-effective electric vehicles. Also, incentive programs and other government-supportive policies are likely to drive the growth of the hatchback segment. Based on ownership type, the global market is divided into company-owned and individually owned/private. As the cab service companies such as Ola, Lyft, and Uber are showing greater interest in NEV taxis due to the stringent government rules & regulations. Thus, company-owned is expected to hold the largest share in the ownership type segment.Based on vehicle level, the global market is segmented into entry & mid-level and premium.

The new energy vehicle (NEV) taxi market is expected to growat ~28% CAGR during the forecast period. 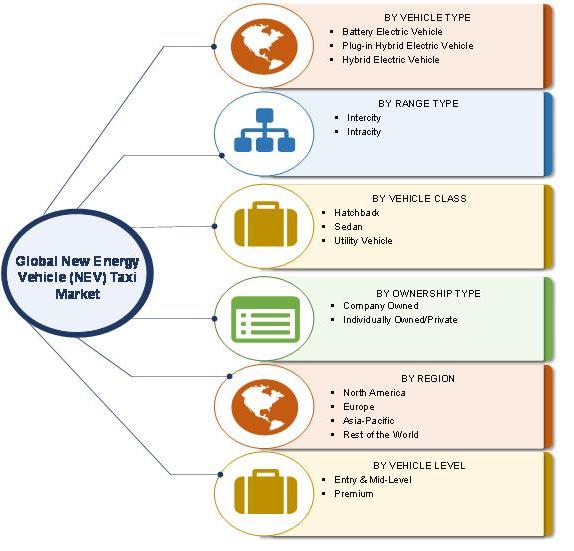 The global NEV taxi industry is expected to witness high growth during the forecast perioddue to the rising demand for cost-effective alternate solutions for mobility and transportation and advancement in battery technologies. The rapid depletion of fossil fuels and rising fuel prices are expected to drive demand for new energy vehicles in future years.According to the International Energy Agency (IEA), as per the sustainable development scenario (SDS), the annual average growth sales of electric cars is anticipated to be 36% per annum between 2019 and 2030. Additionally, as per the EV30@30 campaign, launched in 2017, set a collective goal of having the share of 30% for EVs by 2030.This is expected to drive the demand for NEV taxisduring the study period.Furthermore, removing carbon in the mobility and energy sector has become a fast-growing phenomenon in the EU (European Union). Thus, a continuous increase in EV fleets contributes to the growth of the European NEV taxi market. Additionally, companies are increasing awareness regarding their low total cost of ownership in the long run, as companies in the NEV taxi market are experiencing opposition in car registration due to the higher cost of electric vehicles. Moreover, technological advancements in charging innovation & charging stations are expected to propel the market's growth during the forecast period. Such developments will help taxi drivers in fast and easy charging. Technologies such as wireless charging are merging globally. For instance, the UK government is expected to invest USD 4.4 million in a program, includingten electric taxis (E-taxis) in Nottingham to be fitted with wireless charging hardware for six months. Key players are growing their businesses by developing new products, engaging in mergers & acquisitions, and establishing new plants in emerging economies.For instance, in October 2020, BYD Auto Industry Co., Ltd (BYD) and Hino Motors, Ltd. (Hino) signed a joint venture agreement for establishing a new company for commercial battery electric vehicle development. This new venture is scheduled to be established in China in 2021, with BYD and Hino each making a 50% capital investment.Furthermore, in 2020, Uber announced its partnership with Nissan wherein the auto-manufacturer would make 2,000 EVs for Uber drivers in London. The partnership was done with Uber’s aim to make all its vehicles emission-free by 2025. Thus, the new energy vehicle (NEV) taxi market is anticipated to rise over the coming years.

Based on region, the new energy vehicle (NEV) taxi market is segmented into Asia-Pacific, North America, Europe, the Middle East&Africa, and South America. Asia-Pacific holds the largest share in the new energy vehicle (NEV) taxi marketdue to the supportive government policies and incentive programs in the region.The developments in the automotive industry, especially in electric vehicles in the countries such as China, Japan, and India, are the major factors thatdrive the demand for NEV taxis in the Asia-Pacific region. Additionally, rising R&D activities and growing production capabilitiescreate opportunities for key players to expand their business in Asia-Pacific. China offers lucrative opportunities for companies in the NEV taxi market by reaching important milestones in the number of battery-operated, plug-in hybrid, and fuel cell vehicles.The Chinese government is taking initiatives to increase the use of unconventional energy sources of fuel for transportation.The Chinese government began implementing its NEV program in 2009 to promote the development and introduction of new energy vehicles.For instance, the Chinese government has banned ICE engine new car registration in some urban areas. China contributes a major share in the sales of electric vehicles in the global market as around 1.06 million electric cars were sold in 2019. Moreover,in 2019, the Government of India has announced to spend USD 1.4 billion to subsidize sales of HEV & EV (Hybrid Electric Vehicles & Electric Vehicles) until 2022.Initiatives are also being made to make carmakers develop new EV models and manufacture components such as lithium-ion batteries.Such developments are expected to increase the demand for new energy vehicle taxis in Asia-Pacific.Furthermore, North America and Europe are expected to witness significant growth during the forecast period owing to the presence of several major players.

At what CAGR is the New Energy Vehicle taxi market predicted to grow during the forecast period?

Who are the key players pushing the New Energy Vehicle (NEV) Taxi Market towards growth?

What is the forecast period of New Energy Vehicle taxi market research report?