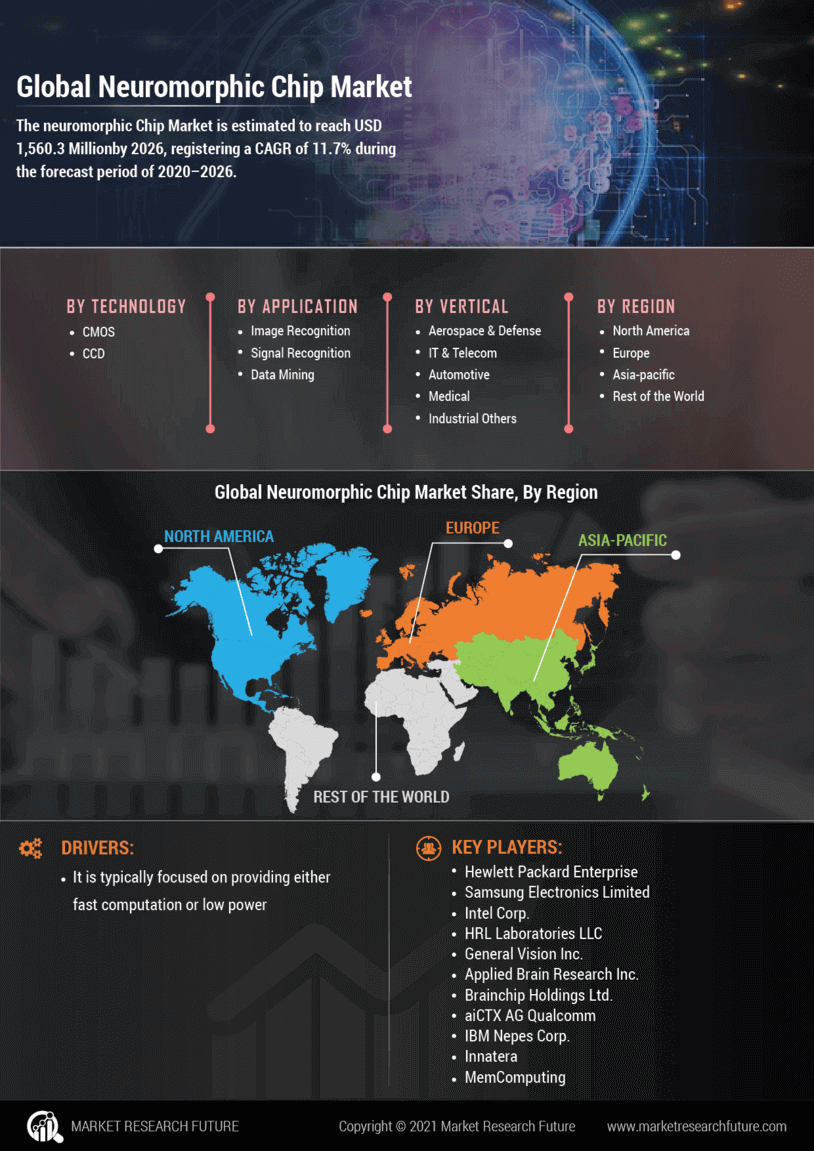 The global neuromorphic computing market has been influenced by the COVID-19 epidemic in numerous verticals. In the year 2020, neuromorphic chips were first employed in medical equipment. An analytical tool, Watson developed by IBM Corp. (US), is intended to be connected with neuromorphic circuits and used for medical imaging analytics. Watson functions like a human analytical system. The medical industry's market is predicted to develop as a result of this. Work from home (WFH) has become the new trend as a result of the pandemic, increasing supply and demand for IT peripherals, which is driving the neuromorphic computing market in the IT & telecommunication sector forward.

However, various limitations, such as a lack of awareness about neuromorphic computing and sophisticated algorithms that make building hardware for neuromorphic chips more difficult, are impeding the Neuromorphic Chip Market's growth during the Neuromorphic Chip Market Analysis. Furthermore, matching a human's adaptability and ability to learn from unstructured stimulus data could be a major market issue during the foreseeable period. The difficulty of implementing it, as well as worries about security and privacy, are some of the roadblocks to its development.

Neuromorphic engineering, also known as neuromorphic computing, is a term for using very-large-scale integration (VLSI) systems with electrical analog circuits to replicate neuro-biological architectures seen in the nervous system. This means that chips created with such technologies are intelligent and capable of simulating the human brain. The use of these chips not only improves the instrument's reliability but also improves its performance. Those processors are the reason why voice- and gesture-controlled devices function so well. These chips can be used for more than just one or two functions. This technology is expected to be used in high-tech robotics, future automobile designs, and other applications.

The Neuromorphic Chip Market Report has been bifurcated into various segments that will help the market to achieve the highest CAGR during the forecast period. The market segments are as follows:

During the historic forecast period, North America led the global market, and this trend is likely to continue during the forecast period. The Asia-Pacific region, on the other hand, is predicted to have the quickest growth in the Neuromorphic Chip Market over the forecast period. The expansion of the Neuromorphic Chip Market in this region is likely to be fueled by the adoption of neuromorphic computing for security purposes. North America is predicted to have the greatest share of the worldwide neuromorphic computing market, accounting for 40% of the total. A key driver for this region's domination is widespread knowledge of the benefits of neuromorphic computing in industries such as aerospace, military & defense, and medical. The United States is leading the industry in North America, having adopted artificial intelligence for machine learning, natural language processing (NLP), image processing, and speech recognition across industries such as medical and automotive. While APAC is predicted to hold the second-largest share of 37% and increase at the fastest CAGR. China, Japan, and South Korea are likely to be the largest contributors to the APAC market. In APAC, China is the largest market for AI, followed by Japan; this makes China a promising market for neuromorphic computing in machine learning and natural language processing applications.

Because the market for neuromorphic chips is so small and still in its early stages of development, there are only a few companies. In this concentrated market, top players are expanding aggressively by various market development tactics such as collaboration, market expansion, product innovation, and R&D activities. As a result, market concentration is moderate. These companies place a premium on innovation and, as a result, invest heavily in research and development to offer a cost-effective product portfolio. There have been recent mergers and acquisitions among the major players, a tactic used by businesses to expand their consumer base. The major key players in the Neuromorphic Chip Market are as follows:

The existing and emerging market trends and dynamics in the worldwide neuromorphic chip industry are thoroughly examined in this study. The market definition, as well as major growth points and possible variables producing restrictions, are explored. Market estimations for the key market segments are used to conduct in-depth analysis. The market is divided into four regions: North America, Europe, Asia-Pacific, the Rest of the World. Extensive market analysis by type aids in understanding the existing technologies in use as well as the versions that are expected to acquire importance in the future. Competitive intelligence clarifies the situation across geographies and amongst players.

What is the expected market valuation of the neuromorphic chip market?

What is the expected CAGR of the neuromorphic chip market?

Which region can lead in the neuromorphic chip market?

North America can lead in the neuromorphic chip market.

Who are prominent manufacturers in the global neuromorphic chip market?