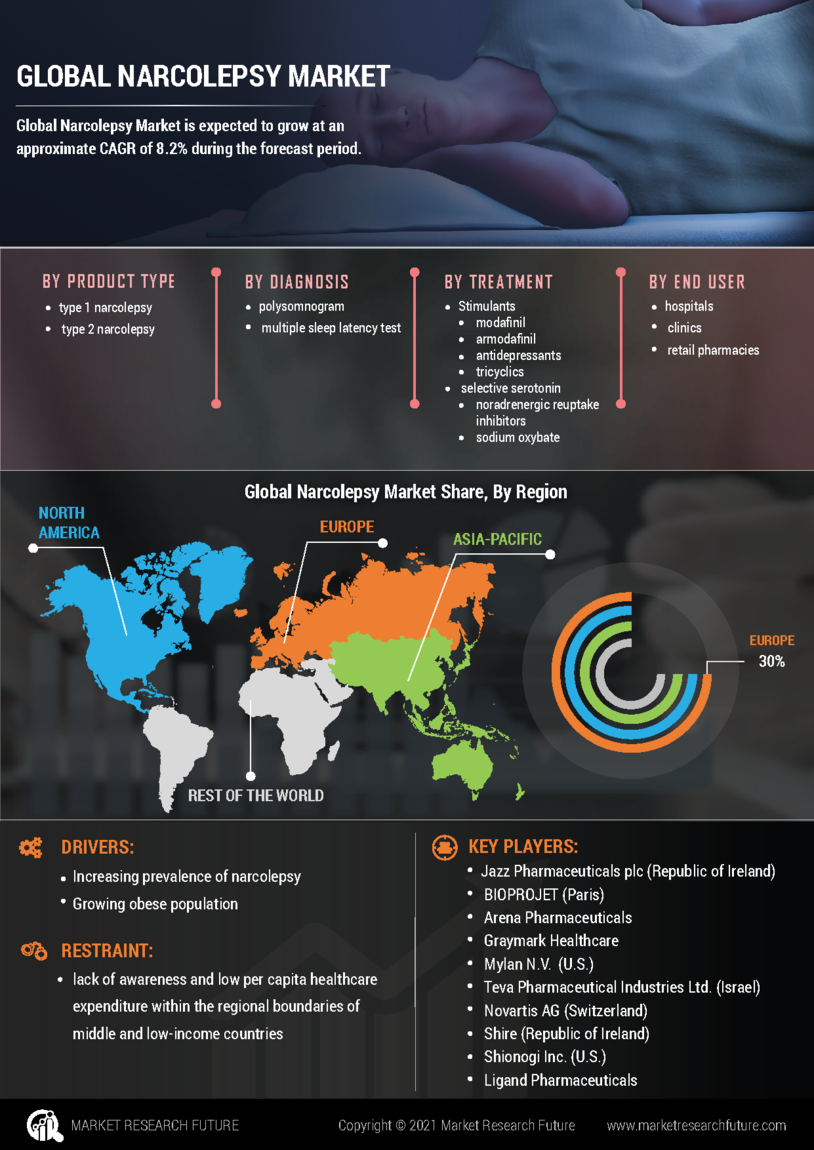 The narcolepsy market size was valued USD 2.9 billion and is expected to reach USD 6.9 billion by 2030 at 9.7% CAGR during the forecast period 2022-2030. Narcolepsy can be understood as a medical condition that is characterized by overwhelming daytime drowsiness and experiencing sudden attacks of sleep. Sometimes, these chronic sleep disorders can lead to a sudden loss of muscle tone that is known as cataplexy. This leads to weakness and loss of muscle control, as well. Sleep paralysis and other issues like hallucinations, daytime sleepiness, fragmented sleep & insomnia, besides others are some of the most common symptoms of narcolepsy disease.

The narcolepsy market has been one of the affected markets since the coronavirus infection has turned into a pandemic and is facing adversities ever since. The changing way of life and inclinations of individuals is a consequence of the pandemic that sped up a significant change in the useful examples of the market. The primary explanation for this is that the pandemic has introduced significant difficulties for industry and market verticles which are confronting issues to work. The inaccessibility of unrefined substance for the creation and assembling close by the strategic help nonattendance is pushing for a mass disturbance of the store network instrument. The examples of interest and assembling are distinctive in both the provincial and worldwide areas are vigorously affecting the capacity of the interest to work and the practical limitations that have been forced are likewise adding to the affliction.

Notwithstanding, to accomplish the past examples and advantage both the makers and interest groups, the public authority is putting resources into innovative work strategies to assist the narcolepsy market with growing a worldwide scale. Likewise, the key market players are and route to curating inventive and imaginative items and dispatching them for an enormous scope. This is being done to assist them with perceiving the items and requests according to the accessibility likewise.

The narcolepsy market size is witnessing the emergence of various market factors that will drive the global market towards growth amid the ongoing forecast period that will be ending in 2030. There has been an increase in the prevalence of narcolepsy and the growing degree of the obese population are the major drivers of narcolepsy market growth during the forecast period of 2022-2030. According to the stats that have been circulated by the Sleep Science journal in 2017, it was estimated that approximately 1 in every 2,000 people across the global scale lives with narcolepsy. Moreover, from the period, the Australian Institute of Health and Welfare stated that approximately two-thirds, i.e., 63% of the Australian population aged 18 years and more were estimated to be overweight or obese and had higher chances of contracting the disease.

There has been a rising number of people who are suffering from a host of narcoleptic disorders, which are inclusive of hallucinations, sleep paralysis, disrupted nocturnal sleep, and obesity. These issues are prevalent that have caught the attention of governments around the world. This attention is forcing them to take the necessary steps to address this condition. For instance, there has been the establishment of awareness campaigns that are conducted by various networks, including the National Center on Sleep Disorders Research. These help to address the needs of individuals with serious or mild narcoleptic conditions.

The narcolepsy market revenue is rising because of the excellent performance of the following market segments which are stated below:

The narcolepsy market is segmented based on the type and includes type 1 narcolepsy, type 2 narcolepsy, and others.

Based on the market diagnosis

The narcolepsy market has been categorized into polysomnograms, multiple sleep latency tests, amongst others.

Based on the market treatment

Based on the end-users

The market has been segmented into the end-user industries and includes hospitals, clinics, retail pharmacies, and others.

The North American region is likely to dominate the narcolepsy market. The main reason behind this is the well-developed healthcare sector along with high healthcare expenditure and a huge patient pool and population. According to the stats that have been circulated by the National Institute of Neurological Disorders and Stroke in 2018, it is estimated that 135,000 to 200,000 people in the United States, as a part of the North American market are living with narcolepsy. Moreover, there is a rising presence of developed economies like the U.S. and Canadian market alongside the global players such as Mylan N.V., Ligand Pharmaceuticals, Inc., amongst others. These are functioning within the regional boundaries of the American region that fuels the narcolepsy market growth.

The narcolepsy market share is rising because of the performance of the following market players:

The European market is likely to witness the second-largest growth for narcolepsy and the trends are followed by the Asia Pacific. The aim behind this is the availability of funds for research, the huge patient population, and the growing number of obese, and the presence of developed economies like France, Italy, and Germany within the domestic region.

The Asian Pacific region is estimated to be the fastest-growing region for the narcolepsy market. There has been a reliable presence of developing economies like India and China within the region. These countries are witnessing the development of the healthcare sector that facilitates regional market growth. Moreover, there has been a rise in favorable government policies that will boost the narcolepsy market growth.

Saudi Arabia, Qatar, and Kuwait are the regions that are witnessing a rise in trends that will help in propelling the market growth during the period that will be ending in 2028.

The narcolepsy market report is a combination of the diverse market factors that will help the market and lead the way towards the growth scale and the possible challenges that have been predicted by the experts for the forecast period of 2021-2028. The market report helps to understand the recent developments that have been undertaken by the industry and the ones like investments or mergers that will lead to expansion in the ongoing forecast period that will be ending in 2028.

Narcolepsy is a medical condition wherein the patient suffers from chronic drowsiness during the day and sudden attacks of sleep.

What is the CAGR of the Narcolepsy Market?

Narcolepsy Market is expected to exhibit a strong 9.7% CAGR over the forecast period till 2030.

Who are the leading Narcolepsy Market players?

Which is the leading regional Narcolepsy Market?

The Americas dominate the global Narcolepsy Market, followed by Europe.

What is the major driver for the Narcolepsy Market?

Growing awareness about narcolepsy is the major driver for the Narcolepsy Market.

Increasing prevalence of narcolepsy and growing obese population will encourage the global market...