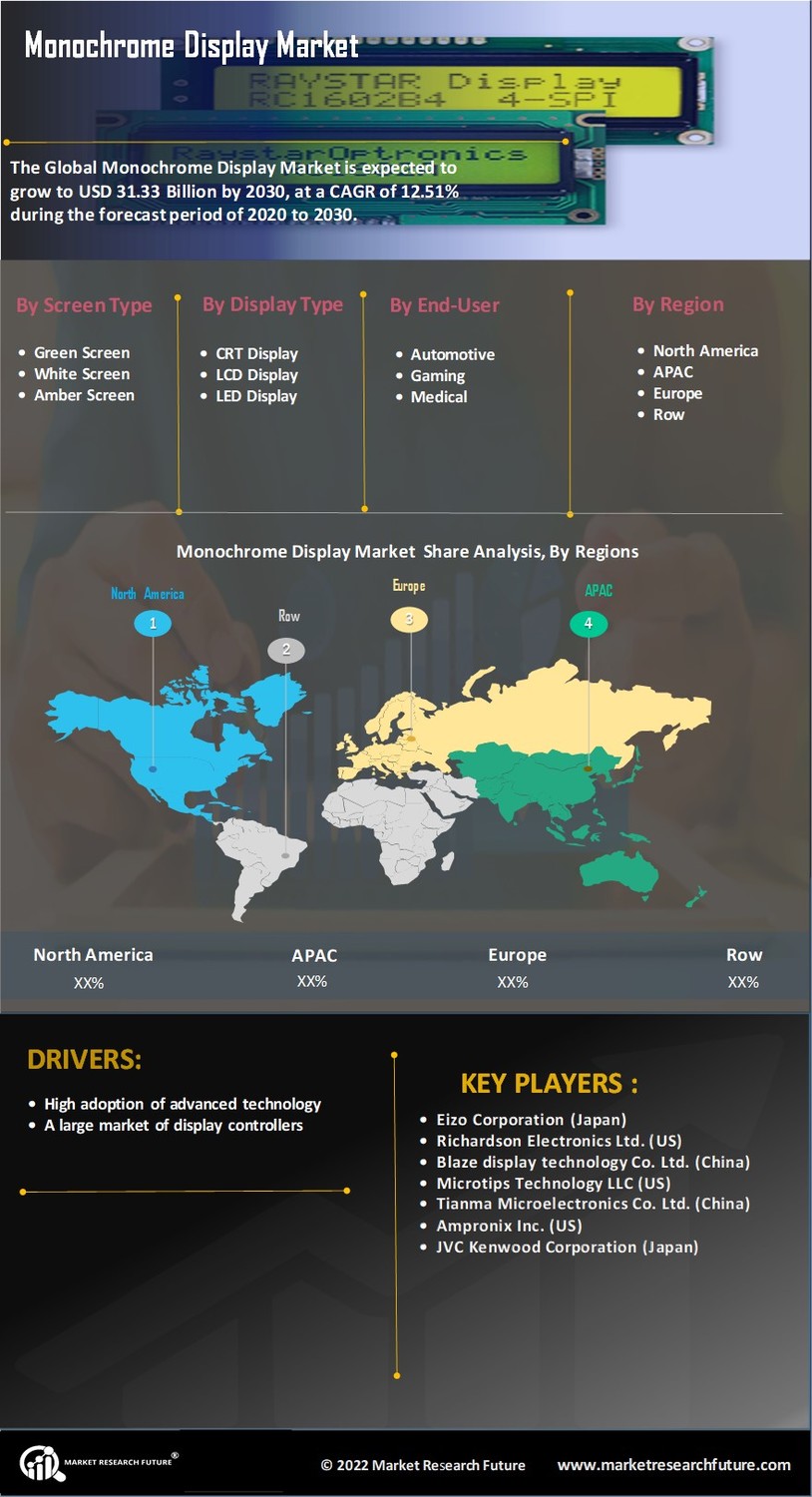 The Global Monochrome Display Market is expected to grow to USD 31.33 Billion by 2030, at a CAGR of 12.51% during the forecast period of 2020 to 2030. Monochrome displays are gaining massive momentum in the electronics market. The high-resolution capability and low cost of the display are some of the significant forces fueling its market growth. These displays provide single color pictures though it varies with a shade of some models. The monochrome display is a popular technology in gaming where it is used to display vector graphic image with high resolution. The high-resolution capability and fast processing of display images are some of the significant force fuelling its monochrome screen market growth.

Monochrome CRT displays are the most commonly used technology, especially in the medical industry. Due to its high-reliability performance at a low price, it has been highly adopted by medical, manufacturing, and gaming industry. With growing technical advancement in the electronics sector, there is a tremendous shift of CRT monitors to LCD monitors. LCD monochrome delivers more clarity, saves energy, has a high megapixel pictorial view, and provide high-quality images. This is expected to increase its market presence in the coming future and would offer high competition to CRT monochrome screen market. Whereas LED monochrome display, though would increase workspace optimization, is on the introduction stage of the market and has to beat the already acquired market of CRT and LCD monochrome displays thereby predicted to grow with steady growth during the forecast period of 2017 to 2023. 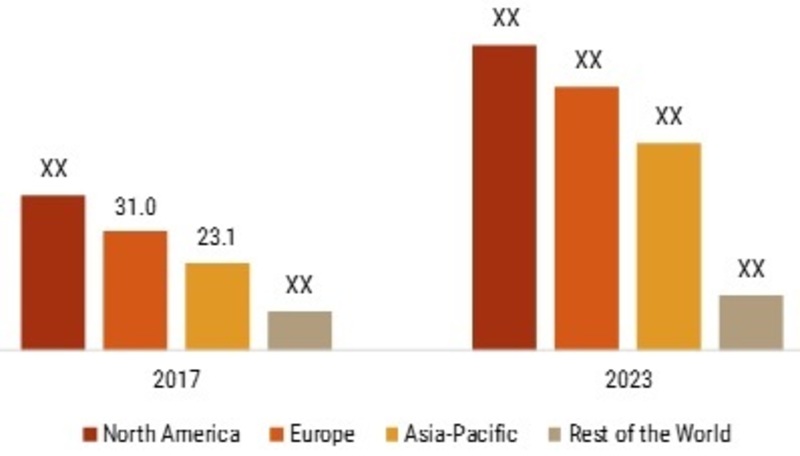 The monochrome display can be used for indoor and outdoor applications such as displaying monitored physical quantity (temperature, pressure, and vibration), displaying bold and large text, and for surveillance and traffic control. The monochrome display is used in various verticals, including consumer electronics, automotive, and manufacturing. Monochrome displays are extensively used in the medical sector for a wide area of applications including diagnostic display, surgical display, radiology display, clinical review displays. It has been adopted by hospitals, clinics, diagnostic centers, pathology labs, and others. In the consumer electronics industry, monochrome displays are used in television, graphics-based monitors, watches, smartphones, and wearable. Monochrome displays such as LCD and LEDs are used for wide automotive applications such as car navigation, instrument panel, and in rear seat monitors.

The monochrome display market has been segmented based on screen type, display type, end-user, and region.

Based on the screen type, the monochrome display market has been segregated into green, white, and amber screen. The green screen segment accounted for the largest market share in 2017 and is also expected to register the highest CAGR during the forecast period.

Display type segmentation of the monochrome display market comprises CRT, LCD, and LED display. The CRT segment accounted for the largest market share in 2017, while the LCD segment is expected to register the highest CAGR during the forecast period.

Based on the end-user, the monochrome display market has been divided into consumer electronics, automotive, gaming, medical, and manufacturing. The medical segment accounted for the largest market share in 2017 and is also expected to register the highest CAGR during the forecast period.

Monochrome display market, by region, has been segmented into Asia-Pacific, North America, Europe, and rest of the world. North America accounted for the largest market share of in 2017. Some of the factors that are responsible for the market growth include high adoption of advanced technology, a large market of display controllers, and high adoption of LCD and graphic monitor in various sectors. Asia-Pacific is expected to grow at the highest CAGR during the forecast period owing to factors such as an increase in healthcare expenditure, various healthcare initiatives by government, and the presence of leading Amber Monochrome Monitor manufacturers in China.


Key questions addressed by the report

Who are the end-users in the global market?

The end-users in the market are Automotive, Consumer Electronics, Medical, Manufacturing and Gaming, among others.

Why are monochrome displays gaining momentum in the electronics industry?

Monochrome displays are a massive hit in the electronics industry, given their high-resolution capability as well as their low cost

What is monochrome display’s use in gaming?

Monochrome displays are used in gaming for displaying vector graphic image with high resolution. The high-resolution ability combined with the fast-paced processing of display images fosters their demand in gaming.

What is the latest market trend highlighted in report?

Trend of green monochrome displays is picking up pace in the market, given their lightweight as well as low cost of manufacturing.

What are the applications of monochrome displays?

Monochrome displays are used for indoor and outdoor applications including displaying bold and large text, for surveillance and traffic control and displaying monitored physical quantity (pressure, vibration and temperature), among others.

What are the display types covered in the report?

LCD, LED and CRT are the display types covered in the report.

Which end-user is the leading segment in the market?

Medical is the leading segment in the global market.