Soldiers are often expected to carry heavy loads over long distances. There is a general need for the military forces to maintain mobility and sustainability, as well as exhibit their ultimate performance on the battlefield with an external load. There are numerous other examples, over the years, which show the adverse effects of heavy load carriage on the performance and operational success of the soldiers. During extreme climatic conditions, the complexity of military operations continuously require soldiers to carry mission-specific apparatus and move on foot for prolonged durations. Load carriage system include clothing, protecting ensembles such as helmet or body armor, food, and water. The carriage of such external weights for long and continuous periods can hinder the overall performance. It is designed to make tasks easier for soldiers, by enabling them to carry their loads and complete their tasks and missions, with minimum degradation in performance. However, the high probability of injuries is one of the restraints for the growth of the military load carriage systems market. Therefore, market players are focusing on technological advancements that would reduce body pain, stress, and fatigue. This along with the usage of robots for load carriage is currently trending in the market.

The growing rivalry and disputes among countries is among the major drivers that would fuel the demand for military load carriage systems. As the war zones are mostly located in rugged and mountainous areas, soldiers need to sustain their energy and perform effectively. Furthermore, the carriage of pharmaceuticals, communication systems, and artillery are equally important during any military mission.

There were several contracts that supported the growth of the market. For instance, in 2009, BAE Systems signed a contract with Defense Logistics Agency (DLA) for production of Modular Lightweight Load Carrying Equipment (MOLLE) Core Rifleman Sets, Ruck sets, and components. In 2010, Boston Dynamics signed a contract with DARPA to a new robot mule to help soldiers on foot carry gear in the field. Therefore, the global military load carriage systems market is estimated to register a CAGR of over 6%, during the forecast period.

Military load carriage systems market is segmented on the basis of type, configuration, and region. Based on type, the market is further segmented by bag pack and wearable. Bag packs reduce the probability of injuries and allow the soldiers to spend less energy, during their missions. In the recent times, technological advancements in the design and development of bag packs, to reduce injuries such as paresthesia of the limbs and musculoskeletal injuries, is a great opportunity for the key players. Based on configuration, the market is further segmented by a shoulder mounted, and waist mounted. Shoulder mounted segment is estimated to witness the highest CAGR during the forecast period. 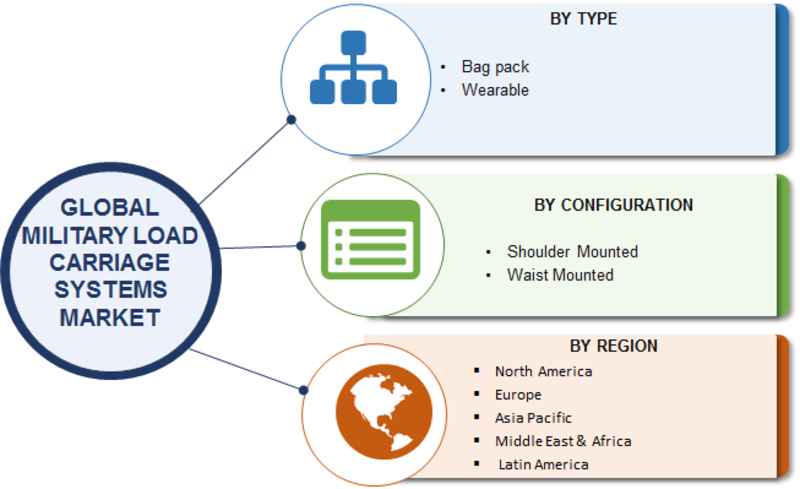 North America dominated the global market followed by Asia Pacific. Asia Pacific is expected to grow during the forecast period. The Middle East countries, in particular, are expected to be the fastest-growing region for the military load carriage systems. The major contributors of these regions are Iran, Iraq, Israel, UAE, and Saudi Arabia, Turkey, and the U.K. Due to the current war in Syria, the demand for military load carriage systems is expected to increase at a fast pace.

The report for Military Load Carriage System Market of Market Research Future comprises extensive primary research, along with the detailed analysis of qualitative as well as quantitative aspects by various industry experts and key opinion leaders; it helps the reader gain a deeper insight into the market and industry performance. The report gives a clear picture of current market scenario, including historical and projected market size in terms of value and volume, technological advancement, macroeconomic and governing factors in the market. The report provides detailed information and strategies of the top key players in the industry. The report also contains a broad study of the different market segments and regions.

Mine And Ied Detection System Market Research Report – Forecast To 2027