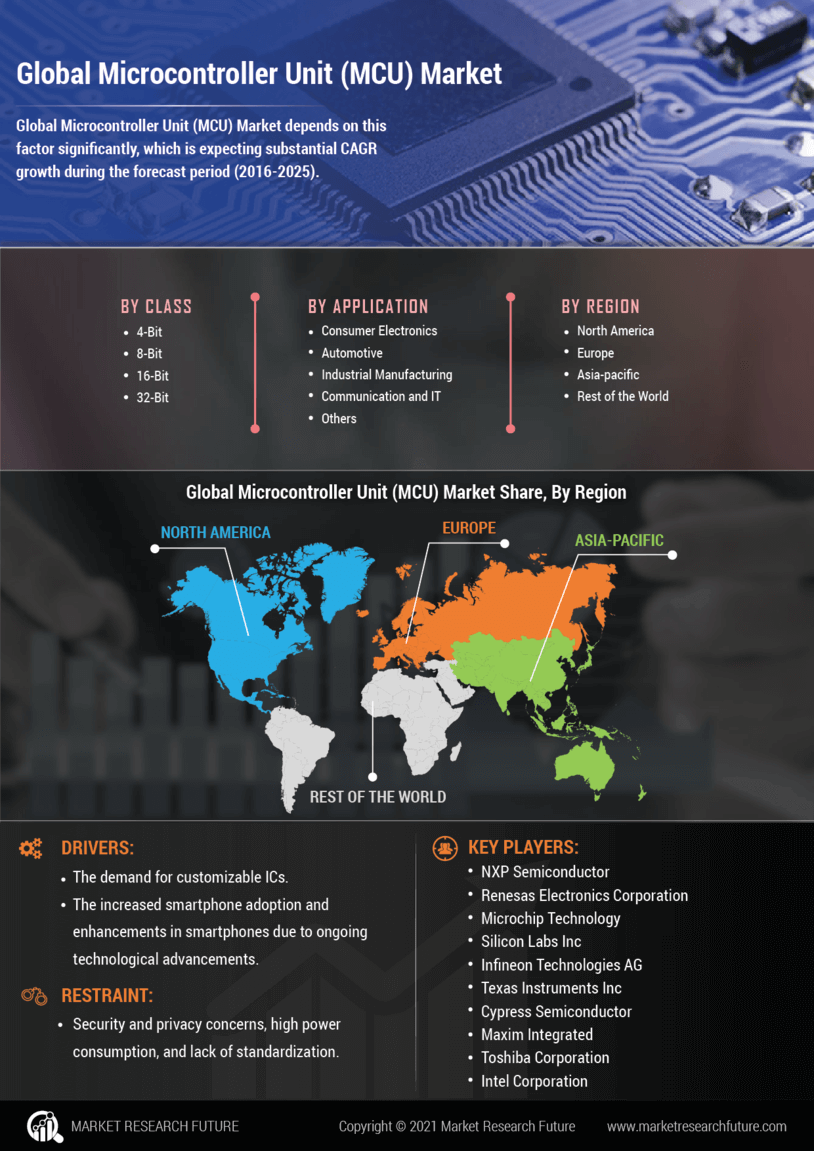 A microcontroller is a compact IC that is designed for specific operations and functions in an embedded system. Microcontrollers are small computers integrated on a single circuit and include a core processor, memory, and some programmable input and output peripherals. The microcontroller unit market has tremendous opportunities, as the utilization of electronic goods is increasing rapidly. IoT requires sensors and actuators to link the physical and digital worlds. The Internet of things (IoT) microcontroller is a combination of IoT technology and microcontroller. A sensor converts a physical state into an analog or digital signal, while an actuator turns a digital signal into a physical effect. The next step in the IoT architecture is the computing system which processes or generates the digital signals which can be performed by microcontroller. A study states that by the end of 2021, there would be more than 200 billion connected devices helping the organization and personals in their daily activities. Several devices need miniaturized IC and microcontrollers. Thus, the growing IoT market would significantly contribute to the growth of the global microcontroller unit (MCU) market.

Another major factor is the increased smartphone adoption and enhancements in smartphones due to ongoing technological advancements. The introduction of new technologies such as 4G and the migration to 5G are further boosting the deployment of customized SoCs and microcontrollers.

The Global Microcontroller Unit (MCU) Market has been segmented based on class, application, and region.

By application, the microcontroller unit (MCU) market has been segmented into consumer electronics, automotive, industrial manufacturing, communication and IT, and others.

By region, the microcontroller unit (MCU) market has been segmented into North America, Europe, Asia-Pacific, the Middle East & Africa, and South America.

The global microcontroller unit (MCU) market is characterized by the presence of several global electronic components, IC, and processor manufacturers. The competition among the existing and new players for shares in the market is highly intense. Quality, performance, and reliability of microcontrollers are some of the factors that help vendors to sustain in an intensely competitive market. Furthermore, technological advancements for the adoption of MCUs across automotive, electronics, consumer electronics, and telecommunication sectors is expected to fuel the growth of the microcontroller unit (MCU) market during the forecast period.

What can be a significant market growth opportunity?

The expanding IoT industry can be a significant market growth opportunity.

What is the rising trend in the global market?

Introduction of the latest technologies such as 4G and the migration to 5G is the latest trend in the market.

What are the main applications covered in the report?

Automotive, consumer electronics, communication and IT, and industrial manufacturing, are the main applications covered in the report.

What are the chief reasons backing the strong market growth in North America?

technological advancements within the medical industry along with the presence of renowned microcontroller manufacturers and the rising number of centers for semiconductor research and development are the chief reasons backing the strong market growth in North America.

What is the market competitive landscape outlined in the report?

The market is marked with the presence of a large number of IC, processor and electronic components manufacturers. There is a fierce competition between the established and the new vendors gain a better position in the market.