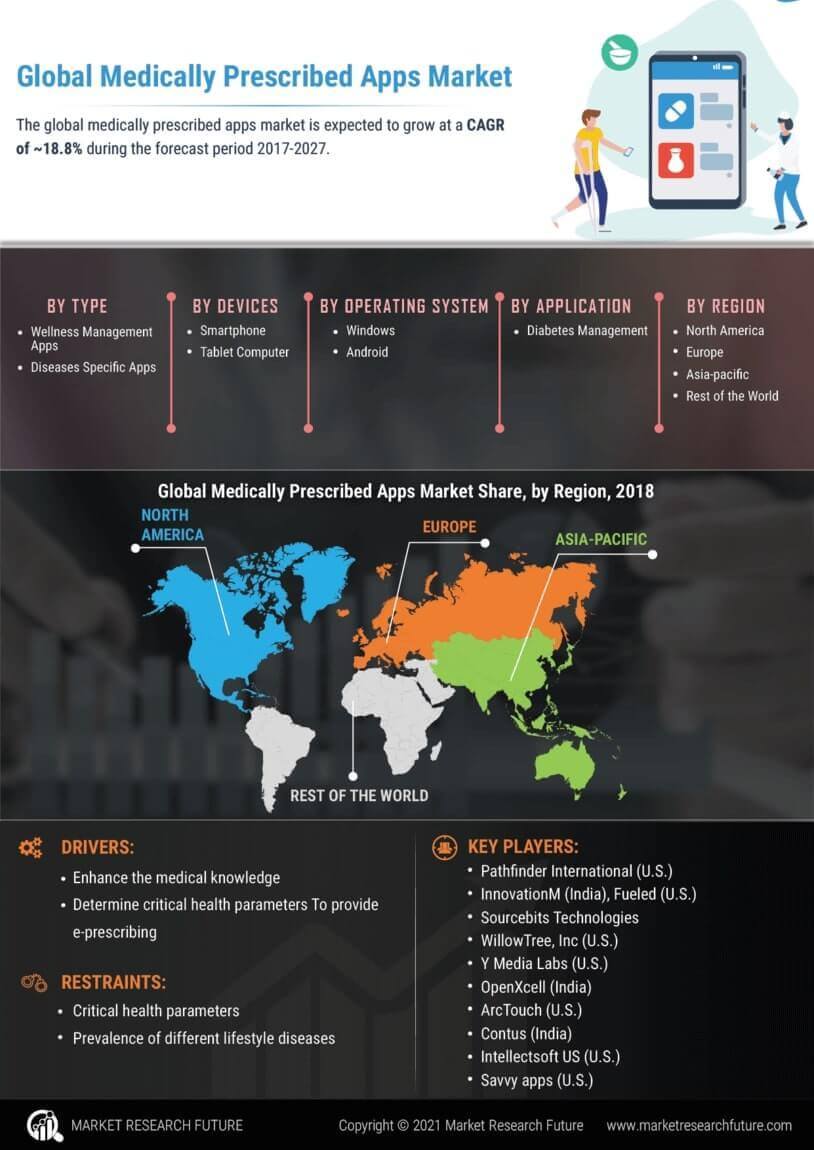 According to the market scenario, the medically prescribed apps state that this app has become popular only after the popularity. Therefore, the patients have been accepting this app only because of the advanced technology and it has the ability to track fitness and the health prevention from severe diseases. Further, the price of the various surgeries and their availability in the nearby hospital can be done through this app. The medically prescribed apps market is expected to grow at CAGR of 18.8% and it has been accessed throughout the forecast period. Further, the demand for such medicated app and its prescription has been high with an increased prevalence of different lifestyle diseases such as obesity and diabetics. In acknowledging the continuous monitoring of the app, the health of a person can be detected along with the notification if the new treatment is available with the cost. Apart from that, an increase in the patient population has been analysed with chronic diseases and it exclaims the importance of the advanced technology as well as the demand.

The sudden spread of the COVID-19 situation has affected the production as well as the demand for the app. As a result, it has given rise to the demand for the availability of medical requirements through the app. Due to the border lockdowns in several countries throughout the world, the medically prescribed apps market was highly advantageous. However, the medically approved app was produced as well as developed to solve the market crisis. This app has helped in keeping the track of the health-related issue as well as the reaction accordingly through this mentioned app.


One of the most key marketing driving factors relies upon the increased demand for the app as well as the reaction from the patients during the crisis period. Further, the better enhancement of the medical knowledge has been accessed by the individuals during the crisis and also to deliver the importance of the app for more people and more production. Apart from that, this specified app has determined the critical health of the parameters to be enhanced and it appears to provide the e-prescribing. Through this analysis, there has been a positive side of maintaining the protocol of the covid amidst.


According to the medically prescribed apps market analysis, one of the major restraining factors o witnesses the growth of the app in developing countries. But, due to the less technologically advanced phones of the major population, the popularity of the market has a downfall. However, the market has analysed that medical apps as well as medical applications in everyday life. Further, this has centralized that the major impact of the medical apps has been expected to gain popularity in the next years. Hence, the preference for the demand of the medical app is necessary for monitoring the patient health.


While analysing the key market concept, it has been observed that the enhancement of the medical app is very much necessary. This has the capability to determine the critical parameters of the health and the introduction of the app for the betterment of the patient who is incapable to travel outside frequently. Thus, this app has the capability of providing an e-prescribing opportunity for the patients as well.

The Compound Annual Growth Rate (CAGR) of the prescribed medical app is predicted to grow at 18.8%. Various drivers such as the increasing demand for medical app throughout the world and their diverse usage for productivity has a positive impact upon the growth of the market.

An increasing emphasis on the medical app for tracking the fitness in a body as well as the enormous information of preventing diseases will impact the medically prescribed apps market positively. Also, the growing initiatives by the government for the development and research will improve the value chain of the Global medical app Market in the forthcoming years.

According to the analysis of the medically prescribed apps market, the global medically prescribed app market has been segmented on different types of basic and it includes the type, application, operating system, and devices. Thus, on the type basis, it has been segmented and it depicts the wellness of the management app, treatment management app of the diseases as well as the women pregnancy app.

Further, on the application basis, this medically prescribed apps market has been segmented under the multi-parameter tracker, cardiac monitoring tracker, diabetes management, and others as well.

Apart from that, in this market scenario, on the device basis, it can be stated that the segmentation has been based on personal digital, smartphone, computer, and tablets.

Lastly, based on OS, the segmentation has been dependent upon the android, IOS system, windows, and more.

Whereas, the segmentation of the market is also based upon the region and it clearly states that the geographical region has played a major role in developing the popularity as well as increasing the demand of the medical app in the future.

While analysing the market regionally, it has been observed that America has been dominated, and owning to its rising prevalence, chronic disease, unhealthy diets as well as the high care of the health spending has been detected. Further, an increase in government support, as well as the involvement of the regions for the development of the countries, has led to the market growth of Europe. On the other hand, Asia-Pacific holds to be the fastest-growing medical prescribed app and its huge presence of patients with chronic diseases. Additionally, it has been observed that the demand for the new technology has been high in India and China, thus it attempted to provide the basic opportunity for the quality of the devices. Lastly, the Middle East and Africa attempt to hold the least share of the market due to the low research as well as the development activities of the healthcare infrastructure.

The key players happen to play a crucial role in uplifting medically prescribed apps market growth. They do mergers, acquisitions, collaboration, new ventures, product launches. These strategies help them to improve their market foothold across the world.

Some of the key Market Players are:

This report mainly includes all the details and it tends to initialize growth along with the better efficiency of the companies with particular management. It states that the driving factors have been interrupted due to the covid 19 situation. The entire analysis is based upon the Covid 19 analysis, regional analysis, market overview, segmentation analysis, market dynamics and it mainly includes the challenges, opportunities, restraints, and drivers. Further, the competitive landscape and the other sections have been presented. Hence, all of the information, that has been collected is from the primary as well as the secondary sources.

What are Medically Prescribed Apps?

Medically Prescribed Apps are apps that provide the patient with information on prevention of diseases, the price of various surgeries, availability of physicians nearby, medical data calculation, and others.

What is the CAGR of the Medically Prescribed Apps Market?

Medically Prescribed Apps Market is expected to exhibit a strong 18.8% CAGR over the forecast period from 2017 to 2027.

What is the major driver for the Medically Prescribed Apps Market?

Growing usage of mobile phones by the patient population is the major driver for the Global Medically Prescribed Apps Market.

Which is the leading regional Medically Prescribed Apps Market?

The Americas hold a dominant 47% share in the Global Medically Prescribed Apps Market.

What are the leading Medically Prescribed Apps Market players?

Leading players in the Medically Prescribed Apps Market include Pathfinder, InnovationM, and Fueled, among others.