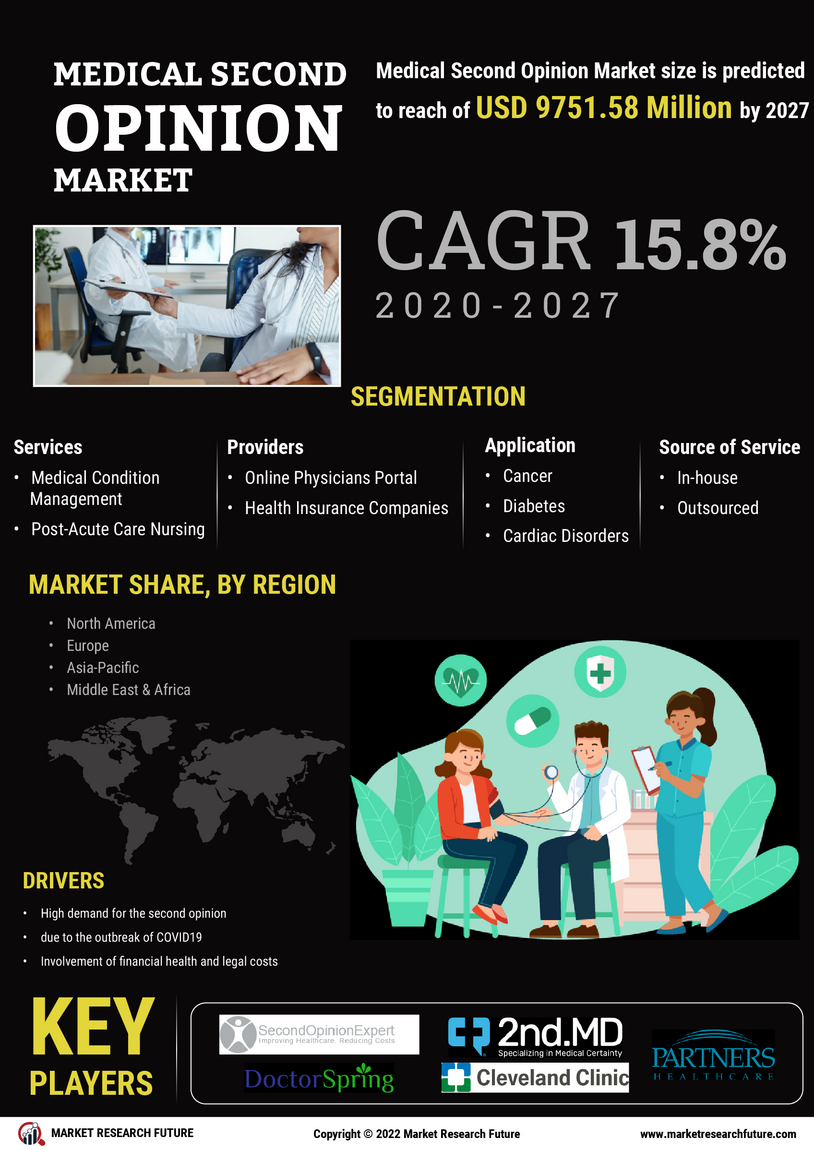 According to the latest research report, between 2020 and 2027, the Medical Second Opinion Market size is predicted to have reached total revenue of USD 9751.58 Million and to have grown at a compound annual growth rate of 15.8%. Second opinions are obtained as a consequence of a patient's request for an assessment by some other doctor or surgeon in order to verify the diagnosis and management of the first physician or to provide an alternative diagnostic and perhaps treatment strategy. The emergence of COVID 19, the significant financial, medical, and legal bills associated with treatment, and the growing need to enhance diagnosis and therapy planning are the primary drivers that are projected to fuel the expansion of the healthcare second opinion industry in the coming years.

For example, cancer patients often seek a second medical opinion in order to get more information or to consider an alternative treatment choice or decision in order to minimize consequences. As per the Centers for Disease Control and Prevention 2017 United States report, cancer-related fatalities were 5 99,108 in the country. In this way, improvements in cancer detection and therapy have the potential to lower the number of cancer patients who die. Furthermore, expanding instances of medical errors, decreasing financial cost of health care offerings and easiness of interplay, and medical insurance emphasizing the independent advice for the efficient management of health assertions are all expected to contribute to the advancement of the medical second opinion market value over the forecast period.

This report contains all the information on the global Medical Second Opinion Market analysis and its strengths. In addition, the report also contains the culmination of dynamics, segmentation, key players, regional analysis, and other essential factors. And a detailed analysis of the global Medical Second Opinion Market forecast for 2027 is also included in the report.

Enhanced diagnostics and patient management are becoming more necessary. According to the World Health Organization, cancer claimed the lives of an anticipated 9.6 million people globally in the year 2018. Patients' life quality may be improved by timely diagnosis and treatment planning choices, which can be implemented in a coordinated manner. This is the primary factor for the global medical second opinion market growth.

Incidences of medical blunders are on the rise. As per the Agency for Healthcare Research and Quality, some medical mistakes include failure to communicate test findings appropriately and insufficient coordination of prescription orders for clinical handover, just to name a few of examples are hence creating opportunities for the global medical second opinion market outlook.

According to experts, a medical second opinion is highly discouraged in undeveloped nations in Africa and other areas, and this might provide a difficult obstacle to global players in the coming years.

Flitting patients who travel from one physician to another, gaining a range of views, many of which are contradictory – represent one of the most significant issues that the sectors are now confronting. They will inevitably choose to embrace whatsoever counsel is offered to them in the absence of a single doctor in overall command of the treatment. The situation is exacerbated further by the lack of clear-cut standards on using second opinions in India and in other parts of the world.

Globally, healthcare services are increasing financial constraints on patients. Globally, rising healthcare prices due to a scarcity of healthcare experts and supplies need to reduce health spending. The second medical opinions market is also driven by rising concerns about healthcare institutions exploiting patients, particularly in low- and middle-income nations. Customers may get comprehensive data from medical second views when deciding on the operation or the primary case. Also, medical second opinion doctors analyze surgical decisions based on new clinical diagnosis, the study of current medical data, and evaluation of different therapeutic alternatives to surgery. This component of the second opinion may reduce treatment costs. A second opinion on medical choices may help reduce surgical complications, contributing to higher healthcare expenses.

According to the reports, the global medical second opinion market is segmented on the basis of services, providers, applications, source of services, and regions. The medical condition management market is expanding at a rapid pace, driven by the increasing number of patients with serious illnesses who demand comprehensive treatment plans and accurate diagnoses. There are various scenarios wherein a second opinion might be beneficial, depending on the patient's health. For example, the second opinion by health problem management should be explored when the client has been told that surgery is necessary and wishes to verify the treatment decision.

A rising need for better diagnosis and therapy has led to an increase in the Hospital Physicians/Specials category. Patients may get advice on their disease or treatment plan from another doctor by getting a second opinion. If a second opinion is seen to be beneficial to inpatient treatment, doctors are free to suggest it.

In order to feel secure when undergoing cancer treatment that is both necessary and earned, it is beneficial to seek second opinions. For example, there may be additional therapy alternatives for the specific kind and tumor stage or a current therapeutic strategy may be confirmed by a second opinion.

The market is segmented based on services, providers, applications, source of services, and regions. The global medical second opinion market trends are expected to witness decent growth during the forecast period.

Based on the propulsion types, the market is segmented into in-house and outsourced.

According to the reports, on the basis of region, the global medical second opinion market is divided into America, Europe, Asia Pacific, and the Middle East & Africa. The Americas are the world's most important commercial area. Driving the market is a growing need for better diagnostics in the area. The American Cancer Society predicts that there will be 17,62,450 new cancer cases identified in the United States this year. In addition, the industry is likely to rise as more individuals arrange their treatment ahead of time.

Medical malpractice is on the rise, and as a result, Europe's 2nd opinion market grew to become the second biggest in the world. Furthermore, there were an estimated 237 million medical mistakes and preventable adverse medication reactions causing hundreds of fatalities in 2018, as per the National Health Services. As a result, the market in the area is likely to develop as a result of the rise in medical mistakes.

Because of the expanding economy throughout the area, Asia-Pacific is the fastest-growing region. Patients with long-term medical conditions like diabetes and cancer are more likely to seek out a second opinion. In 2016, diabetes was directly responsible for 1.6 million fatalities, as per the WHO. It is possible that the medical second opinion market share would grow over the projected period because of better diagnosis in the area.

Businesses in the Second Opinion Market use a variety of techniques to get an advantage over their competitors, including product announcements, mergers and acquisitions, partnerships, and regional growth.

What is the projected market value of the Global Medical Second Opinion Market?

Global Medical Second Opinion Market is expected to record a substantial market valuation of 9.75 billion by 2027.

What is the estimated growth rate of the Global Medical Second Opinion Market?

What is the prime driving factor of the Global Medical Second Opinion Market?

The growing demand for the second opinion driven by the outbreak of COVID 19, and rising need to develop advanced diagnosis and treatment planning are expected to drive the growth of the market.

Which is the application segment of the Global Medical Second Opinion Market expected to witness the highest growth?

The cancer segment is poised to expand as the fastest-growing segment.

Who are the key players operative in the Global Medical Second Opinion Market?