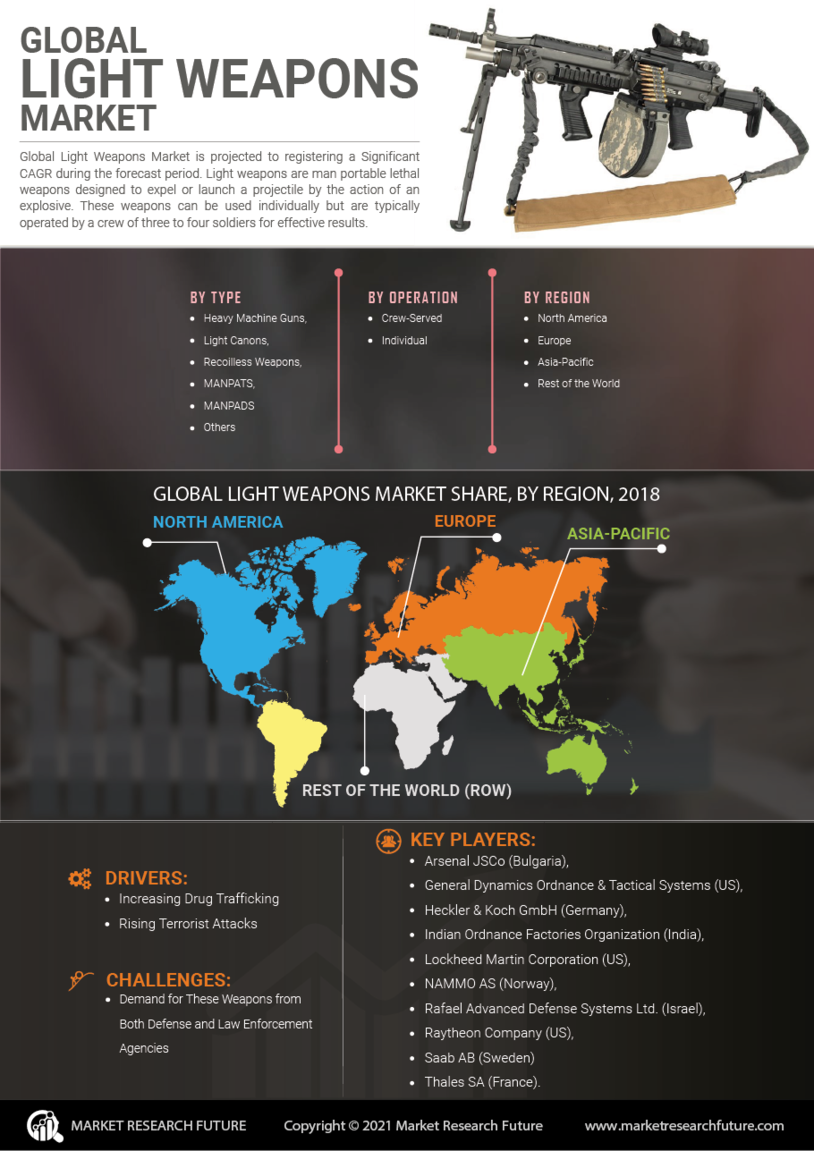 Light weapons are understood to be man-portable lethal weapons that have been designed to expel or launch a projectile by the action of an explosive. The lightweight weapons can be used individually but are typically operated with the help of a crew of three to four soldiers for better. Reliable, and effective results.

Light weapons are generally inclusive of heavy machine guns, launchers, rifles, mortars, and many others. Grenades, land mines, and others like ammunitions are being used, and also it is being considered to be a part of the weapon systems. There has been a strong demand for these weapons from both the defense and law enforcement agencies.

The outbreak of the novel coronavirus pandemic has bright no kind of good news for the light weapons market growth during the ongoing forecast period that will be ending in 2028. The arrival of the Covid-19 has impacted the market dynamics like drivers and restraints, and has further, hampered the growing market competition, and the global supply chain mechanism for the forecast period.

The revenues are registered to have gone down in 2020 and may resume an uptrend gradually from 2021. This is because the market is witnessing the rising need to resume the operations for the rising ability of the market and hence, meet the target audiences’ demand that is spread in various global locations. The global market companies are optimizing their operation and strategy will sustain and beat the competition.

The light weapons market is likely to be driven by the increasing and widespread need for factors like high precision, lightweight, and also, using compact weapon systems. With the evolution of excellent technology at a higher market degree, there are better and guided weapons available with a high target hit ratio and the design developments for the same area are on the way for the global target audience to choose from. The light weapons market size is witnessing the emergence of a considerable amount of resources that are being invested and in the developing stage of highly sophisticated weapon accessories like weapon sights, night vision devices, and others like aiming lasers, laser rangefinders, and fire control systems.

However, the light weapons market size is likely to witness the birth of certain challenges like illegal trading of light weapons, and stringent licensing procedures and regulation, policies in terms of import and export procedures that are hindering the global market growth to a certain extent. Meanwhile, there has been a substantial rise in the adoption of laser technology, followed by the need for lightweight materials, and smart and agile manufacturing concepts that are likely to be creating promising growth opportunities for the light weapons market by the end of the ongoing forecast period that will be ending in 2028.

The light weapons pathfinder has been one of the prominent technological developments of the global market especially during the forecast period that will be ending in 2028. The global market is witnessing the emergence of market factors such as the rising terrorist attacks and enhancing the degree of focus on counter operations, followed by the changing nature of warfare, and also, there has been an increasing drug trafficking and other criminal activities that are positively impacting the light weapons market growth. In addition, there has been a rise in defense expenditure, especially in developing countries further boosting the market growth during the ongoing forecast period that ends in 2028.

The global light weapons market has been segmented based on the type, technology, mode of operation, end-user, and region.

The light weapons market has been segmented based on the type and includes heavy machine guns, light cannons, grenade launchers, infantry mortars, amongst others like recoilless weapons, man-portable anti-tank systems, man-portable air-defense systems, and other weapons.

The market is divided into technology and includes the sub-segments like guided and unguided.

Based on mode of operation

The light weapons market has further been divided based on the operation and includes crew-served and individual.

The light weapons market growth can be attributed to its end-users like defense and homeland security.

The tactical weapons light market has been segmented based on the availability of the audience and resources in an array of geographical regions, as well. The Asia-Pacific region, the Latin American region, and the African regions will prove to be emerging as the maximum growing markets for the light weapons industry. The market is witnessing the emergence of global market countries such as China, Argentina, Mexico, and others like Saudi Arabia, that are likely to show reliable levels of growth. The global unguided weapons market is further, estimated to register a CAGR of 4.05% during the ongoing forecast period that will be ending in 2028.

The weapons of light density are gaining excellent momentum because of the developments that have been undertaken by the following market players:

This report helps to provide the market analysis of the global light weapons market over the forecast period. The light weapons market report discusses the industry, market, and technology trends that are currently prevailing. This market report also categorizes the weapons based on applications and others namely, defense and homeland security. The market share for defense further has been segmented as airborne, land-based, and naval.

What CAGR is the market expected to gain in the coming years?

Which regional market is expected to take the lead during the forecast period?

North America is expected to take the lead during the forecast period.

What are the key types of light weapons?

What are the primary growth boosters in the market?

The primary growth boosters in the market are mounting terrorist attacks and the high emphasis on counter operations along with the evolving nature of warfare, and surge in drug trafficking as well as various criminal activities worldwide. The increasing defense spending, especially in emerging countries also benefits the market.

What are the attractive opportunities present in the market?

The rising adoption of lightweight materials, smart & agile manufacturing models and laser technology are a few promising opportunities in the light weapons market.