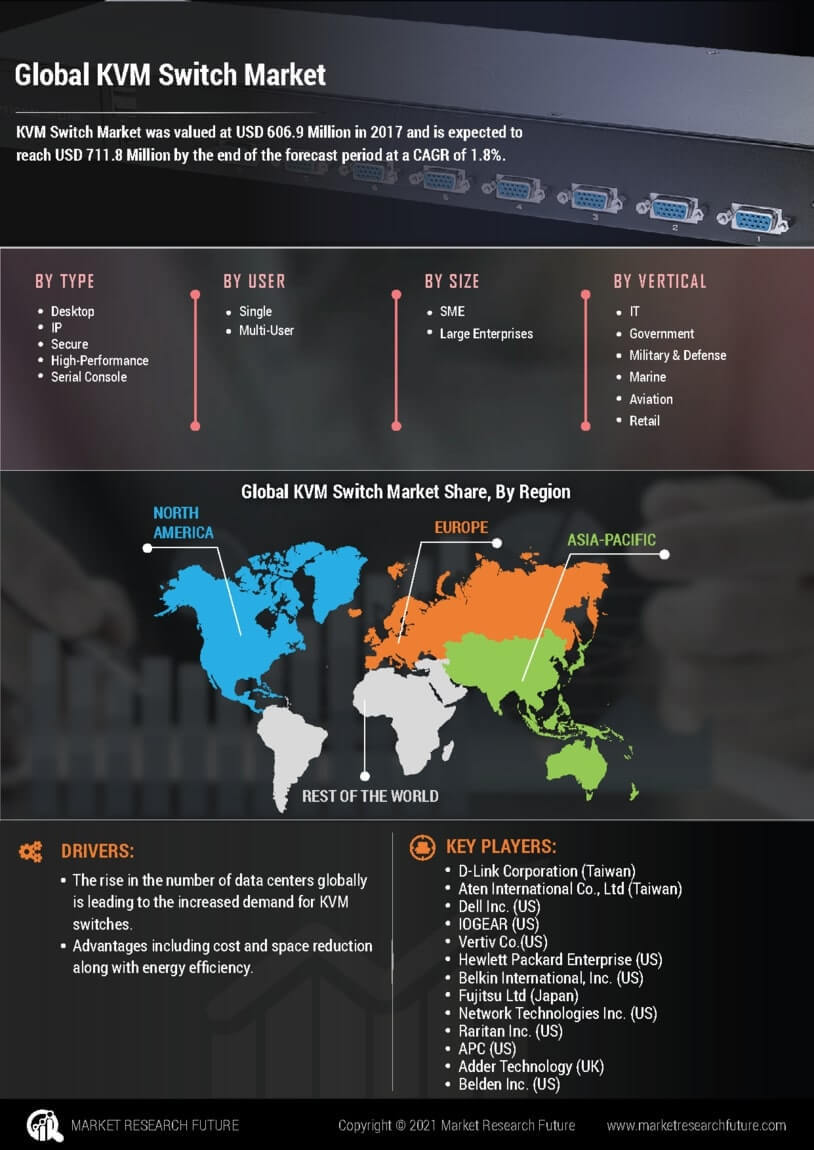 The global KVM switch market was valued at USD 606.9 million in 2017 and is expected to reach USD 711.8 million by the end of the forecast period with a CAGR of 1.8%. With the pandemic year of 2020 as the base year for predicting the growth rate and the expected market valuation, experts suggest that the KVM switch market will witness an increase in the demand quantum for the data storage services, devices, and drivers that are lent by various companies and enterprises which promise good growth attributes to the players and the global market. Due to the arrival of the pandemic, the KVM switch market service operations were on a halt as the new government rulings did not comply with the business requirements.

However, the enterprises and business players are working on the availability of technological advancements related to edge computing and cloud computing along with the government regulations laid down for reducing the high data center operational costs during the period that ends in 2025. Most of the prominent players, as a part of the global market operations, aim to strengthen their global presence by gearing for implementing the technological features and developments rendered through consistent researches and developments conducted. This helps in catering to the demand degree by both the large, small, and medium-sized enterprises that will play an interesting role in the expansion of the market size during the global KVM switch market forecast period ending in 2025.

Normalcy and traveling without restrictions was an understatement till the pandemic arrived and now, both the personal and professional world is facing functional issues and is craving to return to the normal course and routine. The emergence of the pandemic in the form of a healthcare emergency has brought in various accelerations and trends that are likely to be profitable for only some industries like medical and healthcare. However, the pandemic has introduced new struggles for most of the businesses, industries, production, and manufacturing units during the global forecast period that ends in 2025. The sudden transformation introduced by the pandemic in the lives of people is pushing them to bring relevant alternatives in their life like healthy eating, healthier lifestyle, choosing automation services, and using devices that are backed with the advent of technological advancements like the internet of things (IoT), artificial intelligence, and machine learning during the ongoing forecast period that will end in 2025.

The competitive market players are collaborating with the governments that belong to major mushrooming regions across the globe to increase their investment in the research and development department that will help in developing and introducing the products and services on a large and international scale. Also, the market players are looking for opportunities like mergers and acquisitions that will help the market players enjoy the limelight and emerge as dominant market players by conducting the required and demanded KVM switch market operations during the current forecast period that ends in 2025.

According to Cisco Systems which is another prominent player conducting the global KVM switch market operations on a large scale, suggests that the volume of big data that is employed and used in the data center storage on a worldwide level is likely to reach a figure of 403 exabytes by the end of 2021. A considerable share from this will be accounted for by the US region in the North American region during the forecast period that will end in 2025. Following this trend, there are tremendous companies that are allocating their budgets to invest in the expansion of KVM switch market operations and strengthen their global presence. These are likely to present the market with great drivers and opportunities to grow as per the predicted rate by the end of the forecast period in 2025.

Even though the expansion of the KVM switch market size is expanding and similar trends are expected to follow in the forecast period of 2017-2025, the risk rel2Wated to data leaks, misuse, and misinterpretation always prevail. This is barring the customers and target audience, especially the new ones, to enter their information for the global market players to use and extend their devices and services for better functioning and accessing their information.

Most of the companies and enterprises have an elaborated and extensive portfolio alongside the availability of high susceptibility related to cyber-attacks in a variety of industry verticals like the telecommunication industry, banking, and IT amongst others. These store relevant data on the cloud and hence, help in providing a huge degree of security and data protection that helps in safeguarding critical information from intrusions. The use of KVM switches puts the user in a position to have proper control of their data that has been stored in a variety of multiple systems that also help with first-hand access. With time, the KVM switches are gearing up for extending their services from the data centers to a variety of non-data center applications like industrial computer control, kiosk management, surveillance, and others like digital media during the ongoing forecast period of 2025, in turn, helping the market and its services to expand amongst a variety of the target audience.

The type segment of the market deals in standard desktops, secured desktops, high performance, in-rack KVM, and KVM-over-IP, amongst the others that are available. The market extends its safety and security services through these intending to expand the target audience and its availability in various global regions.

The market players extend their services to a variety of end-users like enterprises like IT, telecom, and datacenters amongst others. The other market end-users are the industrial and commercial sector, amongst the others as a part of the global market aiming for growth during the forecast period that will end in 2025.

Based on the regional availability of the market segments and target audience, the market is functional in regions like North America, the APAC region, Europe, and the rest of the world. North America is expected to hold the largest and the most significant market share during the forecast period. The US market, as a part of the global market operations, is witnessing the rise of a huge number of data centers across the globe and is also witnessing robust growth of big data and traffic because of the presence of these data centers.

The KVM switch market industry helps in analyzing the competitive degree that is prevailing amongst the market players. The prominent players are as follows:

Which candidates are pulling the expansion of the KVM switch market?

Dell Inc. (US), IOGEAR (US), Belkin International, Inc. (US), Vertiv Co.(US), Aten International Co., Ltd (Taiwan), and Hewlett Packard Enterprise (US) is having a significant role in the development of the market.

What is the CAGR potential of the KVM switch market?

A CAGR of 1.8% is predicted to boost the market in the coming years.

Which region is predicted to establish its dominance in the KVM switch market during the forecast period?

The construction of data centers is projected to prompt favorable development of the market in the North American region.

What segments are present in the KVM switch market?

Type, user type, organization size, and vertical are the segments of the market.

What are the aspects directing the KVM switch market to a higher development level?

The time, space, and cost-saving are expected to motivate the market in the forthcoming period.