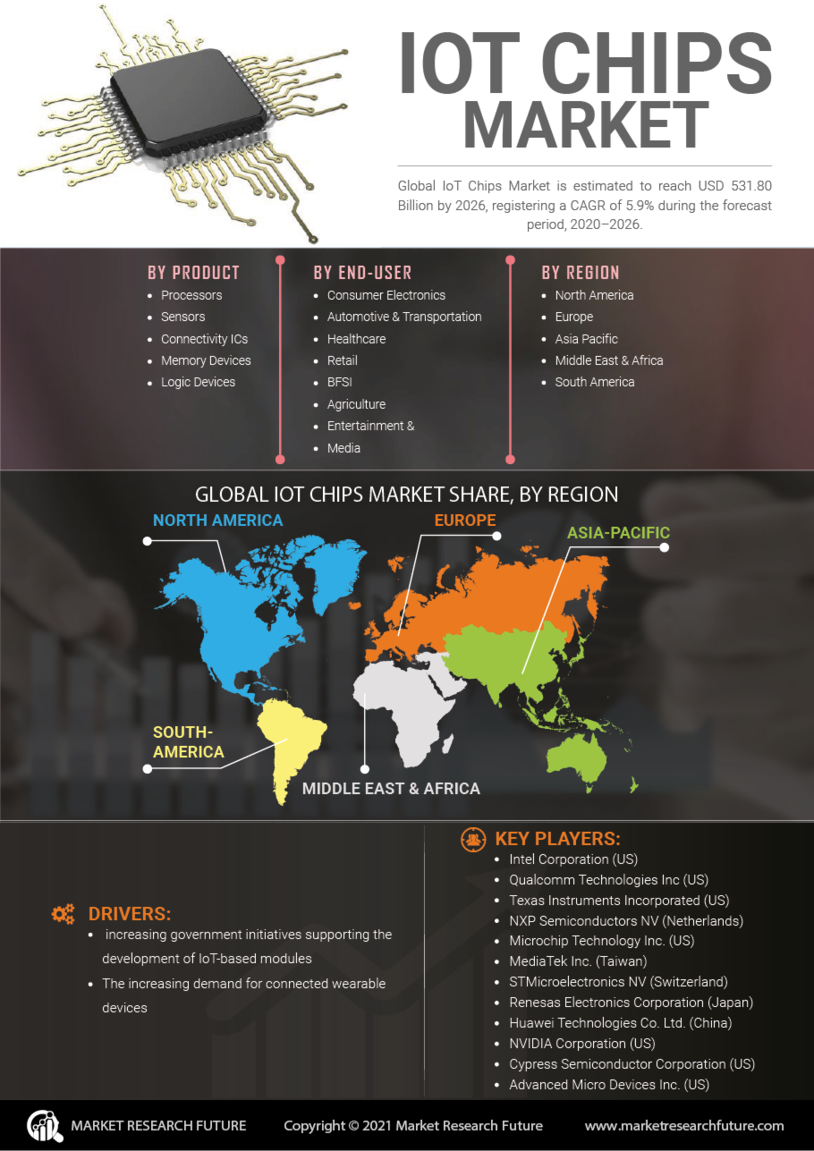 IoT Chips Market is estimated to reach USD 531.80 Billion by 2026, registering a CAGR of 5.9% during the forecast period, 2020–2026. IoT chips are also known as IoT modules which are compact electronic devices that are designed to be used in electronic devices to enable connectivity which utilizes wireless network connectivity. The IoT chips are designed to be always on connectivity by utilizing wireless connectivity and data transfer to enable real-time data transfer and continuous monitoring or data collection applications. The growing demand for wearable and advancing technologies such as AI, 5G, and government funding the IoT-based modules in various aspects of governmental projects are stimulating the growth of the IoT chips industry. The recent studies are confirming the growth of IoT-connected devices when compared to the 34.8 billion sales rate of IoT connected devices in the year 2018. Such factors are presenting opportunities for the IoT chips market growth.


The supply chain interruptions and the reducing demand for industrial products due to declining economic conditions in several countries have affected the growth of IoT connections. The reduced production rate of consumer electronics and interruptions in logistics have also affected the growth of industrial units. Additionally, the IoT contracts were canceled and postponed as several businesses were scaling down their expenses and adopting different business strategies.


The stringent regulations imposed by the government in several countries have reduced the demand for the automotive industry, a recent study conducted by the ACEA proved that the demand for the new cars has reduced by about 28.8% up until October 2020.


Several countries are focusing on developing smart cities and residential projects. Also, governmental organizations are increasing their overall investment for converting the cities into digital communities. Smart cities include devices that could track the water quality, air quality, utilities, and mobility services. Such developments in several countries are driving the overall growth of the IoT chips industry.


The automotive industry is increasingly utilizing IoT technology which is enhancing the user experience to another level. The IoT connection protocols are enabling the over-the-air updates of the car software, such protocols help the drivers in assisting the route and traffic-less paths.


The emerging blockchain technology-based architecture helps in delivering lightweight and decentralized security solutions in several applications for connected devices. Some of the applications include freight transportation, component tracking that tracks throughout the product lifecycle. The privacy and security concerns associated with tracking the component tracking can be alleviated by storing the data in the blockchain ledgers. Such integrations are presenting lucrative opportunities for the growth of the IoT chips industry.


Designing the IoT Glucose monitoring device that is compact enough and in a way that doesn’t hinder the daily activities of the patient is a challenge. On the other hand, the existing glucose monitoring devices that are embedded with the IoT Technology do not consume more electricity and require recharging frequently.


The hand sanitizing monitoring devices are integrated with the IoT technology which constantly reminds people to sanitize their hands. But the major shortcoming is that reminders produced in the form of beep sounds are frequently ignored by people and don’t serve their purpose.


The healthcare industry is considered the major end-user of the IoT chips industry. The wide range of medical devices that require frequent or continuous monitoring is driving the overall growth of the IoT Chips market. However, the false prediction of the medical devices, especially in the mood-aware IoT device which continuously monitors the heart rates, blood pressure, and other metrics to figure out the mental state of the patient. The common metrics monitored often fail to predict the symptoms.


The IoT chips are intensively used in the smart wearable in recent times. However, the challenges associated with the IoT integrated smart devices such as the low battery life of the devices, ergonomic issues, poor value that they offer, and so on are hindering the overall growth of the IoT chips industry.


IoT chips are intensively used in consumer electronics, smartphones, and other devices to make automated decisions by capturing real-time data. The consumer electronics segment is expected to showcase higher IoT Chips market value in the forecast period. The market value of IoT chips is expected to reach over USD 531.80 million by the year 2026 with a steady CAGR of 5.9% during the forecast period. The growing need for smart healthcare devices is also stimulating the overall growth of IoT chips in recent times. The IoT technologies are integrated into the devices such as remote patient monitoring, Glucose monitoring which is capable of monitoring the patient’s glucose level automatically has replaced the conventional way of monitoring the glucose levels. The IoT chips are utilized in several end-user applications such as building automation, the automotive industry, and healthcare, and so on. The growth of the end-user industries is further driving the overall growth of the IoT chips market.


The evolution of IoT technology has highly benefitted the industrial process in recent times. The development of internet connectivity, 5G technology, advancing sensor technology, and other favorable factors are primarily responsible for IoT chips market growth. Additionally, the industrial sectors are adopting automated decision making in real-time rather than data-driven decision making in recent times and automating several industrial processes such as RFID label tracking, sorting the flow of products, tracking the flow, and other essential industrial operations while reducing the manual intervention. Such practices in the industrial sectors are driving the overall growth of the IoT chips industry.

Based on End User:


A prominent company in China, named Chunghwa Telecom which provides wireless communication and internet services has collaborated with SPACE which is a parking space in the region and built a smart lock deployed with the Internet of Things Technology. The system enables the car users to access the car space via mobile application. After being paid for the selected parking space, the lock gets lowered via NB-IoT connection. The system reduces human intervention and thereby reducing the hassle.


In the year 2020, one of the leading market players Qualcomm technologies has developed the modem that comes with a modem baseband and an RF transceiver. The modem is integrated with RF front end and NB2 IoT connectivity that offers coverage for even the delay-tolerant applications. The device is considered to be ideal for IoT applications that require deep connectivity while it demands lower power usage.


In the year 2021, Qualcomm has launched seven new IoT processors which can serve varied industries with a wide range of performance with the features like Wi-Fi 6 and 5G connectivity. The senior director of the IoT project confirms that the product Qualcomm 8250 could be adopted in fleet management in the automotive. When AI is integrated with the cameras, the system can detect if the driver of the vehicle gets drowsy or uses cell phones, or gets distracted from driving. The demand for such applications is increasing the demand for these IoT chips of late.

The global IoT chips market is expected to reach a valuation of USD 531.8 billion by 2026.

The global IoT chips market is expected to exhibit a strong 5.9% CAGR over the forecast period from 2020 to 2026.

What are the major drivers for the market?

The increasing demand for connected wearable devices is a major driver for the IoT chips market.

What is the major regional market?

Asia Pacific is the dominant regional market for IoT chips.

What are the major players in the market?