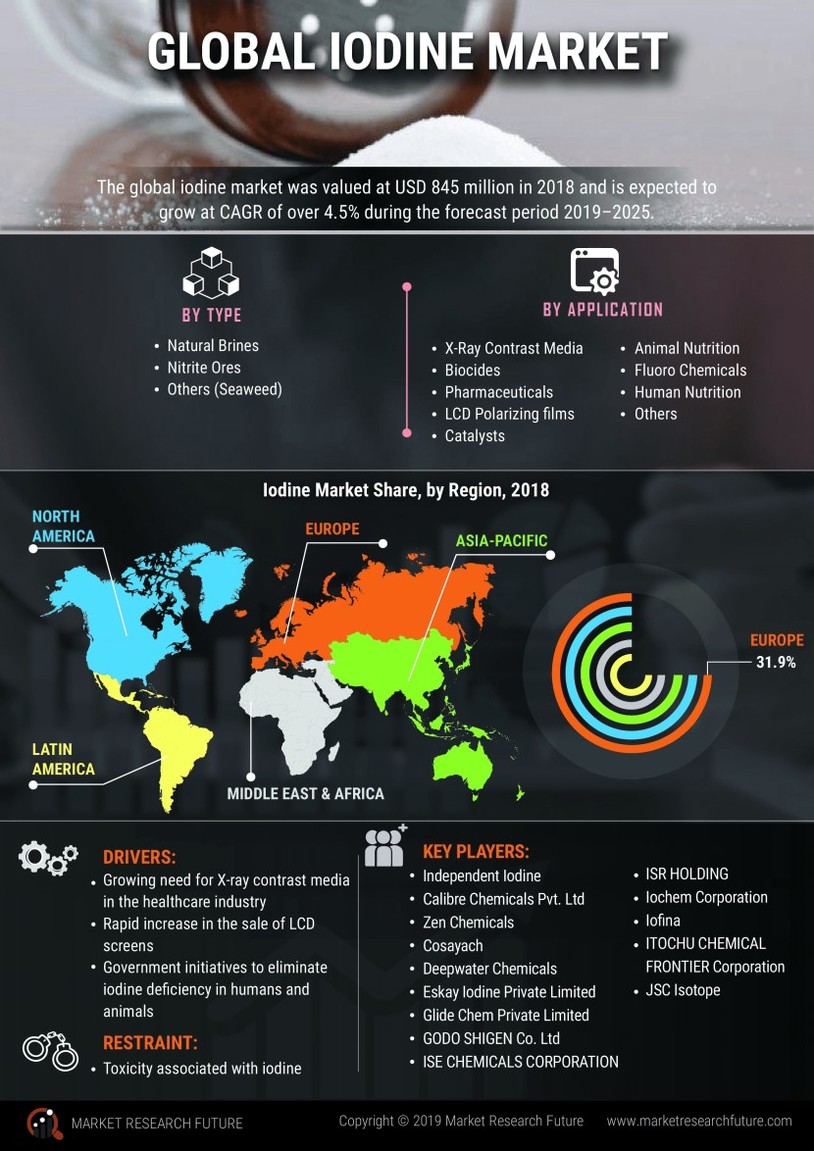 Iodine Market is expected to surpass the market value of over USD 1287 million by the year 2027 while registering a CAGR of 4.4% during the forecast period.

Iodine Market size is expected to surpass the market value of over USD 1287 million by the year 2027 while registering a CAGR of 4.4% during the forecast period. Iodine is one of the vital chemicals which is found abundantly in salt. The amount of Iodine content is crucial for human health and the functioning of vital organs in humans. Therefore several organizations have brought in regulations regarding the consumption of Iodine. The chemical is also used as manufacturing materials for several end-user industries, including the water treatment industry, wastewater treatment, agriculture, animal feed, automotive, electronics, consumer electronics, and so on. The increasing advancement in such industries has significantly impacted the overall growth of the Iodine industry.

Among several industries, the Pharmaceutical industry is considered as the intensive user of Iodine and the growth in the medical department and the increasing investment had increased the Iodine market value. For instance, radiographic contrast media is utilized to view the internal organs and analyze them. Utilizing Iodine in Radiographic contrast media has enhanced the visibility for better medical treatment. Similarly, Iodine is used as disinfectants, bactericides, analgesics, and several other medical applications. Such factors have propelled the overall demand for Iodine.

COVID 19 has caused several disruptions in many industrial processes and the changing attitude of consumers was also considered as the key factor. The production rates and the manufacturing capacities were reduced significantly. Such factors were considered as the major restraint for several industries. Similarly, the Iodine industry was also affected during the pandemic, which was slowly reverting and recovering in recent times. One of the leading organizations, Iofina PLC has declared the sales of Iodine from its derivatives have grown in recent times, soon after the relaxation of the government regulations.

The decline in some industries, such as consumer electronics due to poor demand has impacted the overall growth of Iodine during the pandemic. Additionally, since the operations in several industries were reduced, therefore the demand for Iodine as catalysts and chemical compositions were also affected.

Global organizations such as WHO and UNICEF had announced the significance of Iodine consumption via food and had mandated the consumption of iodine in seasoning. Countries like Germany and surrounding countries are increasing their investment in the health care sector. Especially the number of cancer patients across the globe is increasing; such factors are expected to promote the overall growth of the Iodine industry during the forecast period.

The other potential end-user industries such as feed production are also aiding the Iodine market growth, where the iodine is intensively used in animal feed to increase the quality of meat. The increasing meat consumption and the growing food industry combined with the delivery options are expected to boost the overall growth of the Iodine industry during the forecast period. On the other hand, the agricultural industries are also improving at a faster pace, where the requirement for water and wastewater treatments are increasing rapidly. Several organizations are advising to add Iodine tablets to treat the drinking water. Such factors are expected to promote the Iodine market growth during the forecast period.

The toxicity of Iodine intake, that is improper quantities are expected to hinder the overall growth of the Iodine industry.

The economic condition and the poor investment in the key markets are also considered as the primary challenge for the overall growth of the Iodine market news.

The market value of the Iodine industry was at USD 915.9 million in the year 2019 and it is expected to surpass the market value of over USD 1287 million by the year 2027 while registering a CAGR of 4.4% during the forecast period. The market growth is highly influenced by the development of the medical sector, the increasing adoption of advanced technologies in recent times. For instance, the medical sector is highly focused on the development of the equipment that is used in the analysis of the human body, internal organs; therefore the radiographic contrast media with the Iodine are used to analyze the vascular structure and the vital organs. Such advancements have augmented the Iodine market report in recent times.

The major utilization of Iodine is for the industries such as pharmaceuticals; they are used as disinfectants, analgesics, and other key applications. Therefore North America is projected as the leading market share in the Iodine industry, as it holds the highest demand for pharmaceuticals. The increasing demand for medicines, a growing number of emergencies, and casualties combined with the increasing geriatric population across the region are considered as the major drivers of Iodine market growth across the region. On the other hand, the Asia-pacific region is also experiencing higher demand for the pharmaceutical industry, and the medical industry across the Asia-pacific region is evolving at a faster pace as well. After the relaxation of the government regulations, several pharmaceutical industries have gotten back to their pace and therefore Iodine industry is expected to witness healthy growth across the region.

On the other hand, Europe was at the leading position in the Iodine industry and the growing awareness regarding the significance of Iodine deficiency and the government initiatives to build awareness across the region are considered as the prime factors that are expected to boost the overall growth of Iodine industry.

In the year 2018, one of the leading market players, GODO Shigen had established the new blow-out tower which is especially dedicated to the manufacturing of iodine compounds.

What is the total demand that the global Iodine market is estimated to perceive by 2030?

What are the major driving forces behind the growth of the global Iodine market?

Which region holds the largest share in the global Iodine market?

Who are the top players in the global Iodine market?

What are the key growth strategies of Iodine industry players?

Strategic initiatives such as mergers & acquisitions, collaborations, expansion, and technology/ product launch are some of the growth strategies that players operating in the global Iodine market adopt to gain a larger competitive advantage.

What is the size of the Iodine industry?